As with most engines from BSA and Triumph, the triples were evolutionary rather than revolutionary, largely because of conservative management. Development started in 1963 as a Doug Hele design that was in essence a 500cc Tiger 100 twin with an extra cylinder, even down to the 67 x 70mm bore and stroke.

In 1972, a truncated range was offered by the Norton-Villiers-Triumph group, the Triumph T150 triple gaining a long-overdue front brake disc brake and a five-speed gearbox.

It’s arguable that the racing efforts had partly sustained the image of the triples. But they also had some impact, eventually, on the road bike’s performance and handling.

­One problem with the works Triumphs was lack of cornering clearance so the rules were changed to allow the frames to be altered and the engines raised. Norman Hyde was a development engineer at Triumph at the time. “I was on the ACU homologation committee representing Triumph,” he says. “When the T150s were too low to race, I had the rules altered from ‘frame must be standard’ to ‘frame must be of standard type’."

It was to have a significant influence on the final version of the Trident, a machine that embodied many of the features that should have been incorporated when launched in 1968. 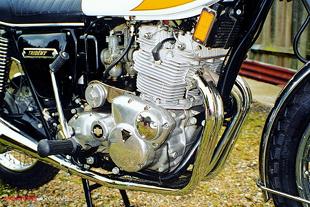 Soon after the creation of Norton-Villiers-Triumph in 1972, it was decided to consolidate manufacturing at the Small Heath factory of BSA and close the Triumph plant at Meriden. Triumph workers responded with the fabled sit-in and the eventual formation of the workers co-operative that continued to manufacture the Bonneville twins.

After the start of the sit-in, triple manufacturing, originally using engines built at Small Heath for assembly into chassis at Meriden, was transferred in its entirety to Small Heath and the experimental department was moved to Kitts Green, which had been the former BSA group development centre.

This was where development of the T160, widely regarded as the best Triumph triple made, was completed. Objectives were to bring the bike up-to-date to compete with the best from Japan and Europe. So, in addition to adopting the BSA engine’s canted forward cylinder block to provide a marginal reduction in height and improve weight distribution, a starter motor was added.

Otherwise, only detail changes were made to the engine, which retained its pushrod valve gear and twin camshafts, 120-degree one-piece crankshaft, triplex chain primary drive to a single-plate Borg & Beck clutch and five speed gearbox, the same as used on the 650cc and 750cc twins. The crankcases were vertically split with three castings, the gearbox having unit construction.

Racing experience
Taking a cue from production racing experience, the engine was raised by 1.25 inches, allowing the frame rails to be tucked in for more cornering clearance. But the overall bike height was reduced slightly with shorter fork legs and rear suspension units.

According to Les Williams, who was in charge of Triumph’s race shop,  the rear fork was lengthened to accommodate a larger battery to power the starter motor and an air box, increasing the wheelbase to 59 inches (1499mm). Wrapping up the package was a rear disc brake, stylish new instrument cluster with a neutral light, a restyled fuel tank and exhaust system using the same annular-discharge silencers found on the Norton Commando. 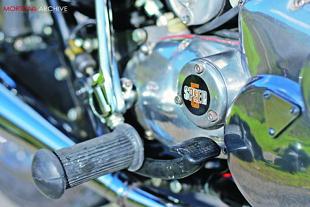 Launched to the motorcycling press at a country house in Warwickshire early in 1975, the bike was received enthusiastically. The T160 embodied everything that made British bikes such a joy to ride, with neutral steering, a relaxed riding position and the new novelty of ample cornering clearance. The bike was so secure in its roadholding that I was prompted to remark that it handled better on wet roads than most Japanese bikes did in the dry.

Given its head, the bike would whisk up to the ton comfortably, the engine chiming in above 4000 rpm. Although the compression had been raised to 9.5;1, the engine breathed through three 1 1/6-inch Amal carbs to provide unchanged peak power of 58 bhp at 7250 rpm, with reserve enough to spin to 8000 rpm.

Performance testing was carried out for the weekly newspaper Motor Cycle at MIRA in April 1975 with the bike recording a mean top speed of 119.54 mph at 7800 in top. With a slight tail wind it revved on to 8000 rpm and nudged 125 mph. These figures made the Triumph faster by far than the Honda CB750, which had clocked a mean 114.6 mph the previous October. This was the K2 version that was less potent than the launch model of six years earlier.

Though I enjoyed the T160, I wasn’t blind to a number of its flaws. Not only was oil consumption heavy, the engine getting through a pint every 250 miles, but it leaked from the rev counter drive union and the clutch cable’s entry point on the primary drive cover.

Fuel consumption was heavy too - 37.5 miles per gallon in normal use was a bit steep. These days that would be average for a high-performance sports bike but they have more than twice the peak power.

Sustaining 100mph
Though the T160 was capable of sustaining 100 mph with the rider normally seated, it couldn’t last long. Up to 70 mph, wind blast could be coped with but above that the footpeg positioning prevented the rider from bracing against the breeze. Another of the changes made with the T160 was a swap to a left-side gearchange lever.

It was likely that the development engineers would have preferred to place the footpegs nearer the swingarm pivot point, but the swing of the kick start pedal (the factory wasn’t confident enough in the Indian-made Lucas starter) prevented this, so they said. So the footpegs were relatively nearer the low seat and placed farther forward than I would have liked. 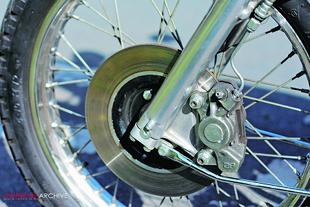 Priorities were different then. As Norman Hyde recalls: “With regard to the engine changes, I feel that the experimental department was more into the major stuff such as the 850/900cc upgrades, starter motors, reduced emission cams rather than the type of oil leak problem we all knew about. This may indicate that were understaffed, or disinterested.”

But it couldn’t last and the financial woes of the Norton-Villiers-Triumph group caught up with it in 1976. The last Trident T160 rolled off the line at Small Heath, just a year after I tested the machine, on 28 April 1976 after 7211 had been made. A few police-issue Cardinal models would be assembled for the Saudi market, and that would be the end. 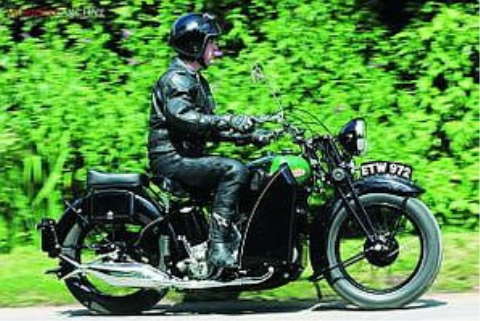 Road Test: BSA G14
The BSA G14 was, by the 1930s, a far-from-advanced piece of kit. But the qualities it possessed were still popular – and indeed still are today. This G14 has been restored by well-known Hertfordshire restorer Robin James and is a super example...
Road Tests - James Robinson, pics Terry Joslin
Road Test: Velocette singles
The keys to a successful marriage may be hanging in the garage, judging by the longevity of this Velocette-inspired union between two kindred spirits. Mike Lewis looks at a Velocette 250 MOV (WD) and the more traditional looking 350 MAC...
Road Tests - Mike Lewis 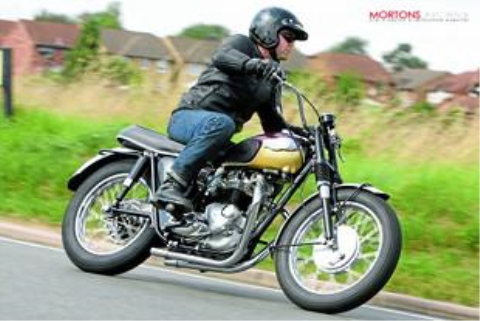 Road Test: Triumph TT Special
If Tonka made motorcycles, then one can’t help thinking they’d make something like this chunky and purposeful TT Special.
Road Tests -