Chico Rasia has finally found his chosen classic: an early Eighties CB400. Now all he has to do is to get it to stop. And start. Which to worry about first?...

This is the second installment on a series of articles about the Honda CB400 twin - it must only mean one thing: I've bought the darn thing!

RealClassic readers everywhere were most probably bored to death after reading about economics and politics, and my very personal quest for a Honda CB400. It's been nearly four months since the first installment of this series and I have finally been able to afford this long dreamed of bike. (Or maybe work overload has taken its toll on my judgement...) 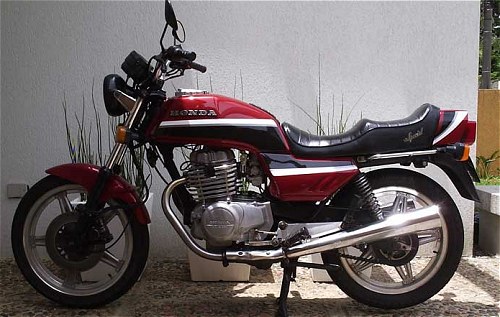 For those of you just arriving who wonder why I call this Honda parallel twin an undisputed classic, you'll need to read my first article.

The bike I bought is surely no concours example. It's been 'semi-restored': new paint job, new tyres, the chrome is OK, but it runs (well, at least it did when I bought it -- more on this later...) and is in generally good condition. OK, it smokes a bit, and the front disc brake master cylinder is leaking, but it has been well worth the £600 I paid for it (a fully restored example may get up to £1750!).

Maybe I've read a few too many RC articles, but these little glitches made me even more willing to buy it! I really, really look forward to disassembling the master cylinder and repairing it and, as my mechanical abilities increase, tackle the engine. Oh, and don't forget all the little rubber and plastic pieces that will need replacing...

Bringing it back home was a bit of a nerve-wrecking activity: anyone ever tried balancing a 380 pound bike on a small pick-up truck? But I did manage to get it safely home (by the way, I've only just recently got my bike license, and wasn't at all comfortable with the idea of riding it back).

I've been awfully busy in the office these last few weeks, so I decided to take it for a very quick spin before I buried myself in work. Helmet on, put it in neutral, press the starter button and.... Surprise! It starts the first time. Let's remember the basics: engage first gear (this one is one down, five up... that's right, six gears altogether), slolwly release the clutch as I disengage the rear brake, and coast up the garageway and out into the street.

Wonderful feeling. Amazed to see just how gentle this big bike is. Time to open up the throttle and engage second gear, which fails to engage. Try again. This time I stall the engine. No problem, I quickly press on the starter button and it comes back to life. One more try: first, accelerate, second, fails to engage, stall the engine. This time I'm stuck on a uphill corner, with no front brake!

I'm sweating like hell, but I manage to turn the bike around and get it back home, only to find that the battery is dead. As I try to kickstart it, another surprise: it is seized.

So, I'm stuck with a bike that won't start because its battery is dead, the kickstart does nothing but tickle it, has no front brakes, and has only one gear...

And I haven't even ridden it properly!

Buggered? Not at all.

After some very busy days in the office, I finally get a chance to work on the bike. I start by getting some fresh fluid into the front brakes. I open the fluid reservoir, which is completely dry, and pour a little fluid into it. Very little, that is. It simply stays in there and goes nowhere. I take off the brake lever, and see the master piston stuck all the way in. I get it loose using a pair of pliers, pull the lever several times, but it doesn't pump any fluid into the brake line.

I leave the bike sitting for a couple of nights, only to find out the fluid isn't going anywhere - it is not even leaking out of the cylinder... So I buy a new piston (less than £3) and decide to replace the old one anyway. I disassemble the reservoir, cylinder and lever, and come upon something which should tecnically be described as Disgusting Green Sludge, clogging all the internals of the master cylinder.

(I guess I'll remember this day as my baptism as a real classicist: washing the brake cylinder in the kitchen sink, amidst looks of disbelief and commentary such as 'maybe you should have the bke serviced, just as a precaution' and 'are you sure you're gonna be able to get that back together?') 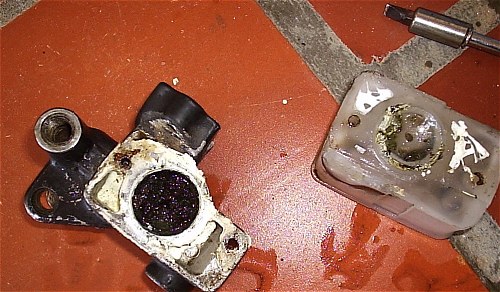 When I finally get the cylinder apart, I realise one more thing about my CB400: this master cylinder must have come from some other bike, as it is some 3mm larger than the new piston I had bought! Since I had already gone through all this trouble, I decide to simply give the old piston a thorough cleansing, and reassemble it anyway. This plan, naturally, doesn't work as I find out the next morning after a quick ride around the neighbourhood - the brakes feel really spongy and I've got brake fluid spots all over my jeans!

So it's back to the parts dealer... Since I can't find the right kind of piston, I decide to replace the whole master cylinder with an universal part, at least until I find the correct piston. A couple of hours of work and -- surprise! The brakes have gotten even worse! By now it's early Saturday afternoon, and I'm feeling really frustrated. A quick look into the service manual reminds me that I MUST purge air from the brake system whenever it gets serviced, however, I simply couldn't find the bleed valve anywhere on the caliper.

By the next morning, I remember to take a look into the parts catalogue, and find the bleed valve. What's left of it, that is. More frustration and thoughts about setting the whole thing on fire. A little bit of forum surfing sheds some light into the problem: it's a very common issue, and there is a couple of workarounds: drilling out the old valve, running a tap and installing a new one or: a messy alternate method for purging air from the system.

I go for the messy alternate.

I unscrew the brake hose from the caliper and dip it into the brake fluid bottle, pumping the lever until I'm satisfied (this is supposed to purge any air from the hose and master cylinder). Next, I remove the caliper, drain out all of the old fluid, place it on a rag, give the pads something to pinch, reattach the hose and pump the lever, using a piece of string to hold it pulled. As I loosen the screw that connects hose to caliper, I can hear air squirting through the joint. I do this about four or five times, and it works! I screw the caliper back onto the fork, check the brake fluid level, and I now have working front brakes! 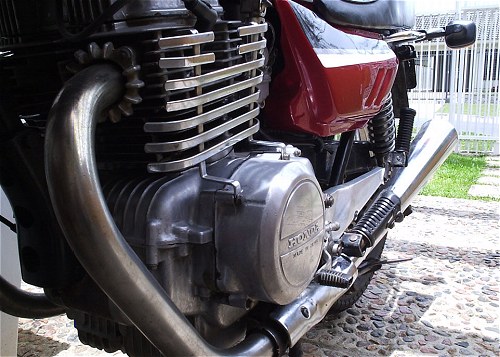 I choose to celebrate by taking a quick ride around the block. I try to start it using the electric foot, but I end up depleting the battery before I can get it running. Since I have no kickstart, I have to bump start it. It takes me quite a few tries, but I finally get it going. On second gear at an uphill run, the engine starts sputtering, and stalls just as I line the bike up my garageway; I end the ride pushing it back into the garage.

So I'll have a lot to do over the holidays: remove the ugly fin guards, adjust the clutch, work out a reliable way to start the bike - either give the battery a full charge or repair the seized kickstart, replace the headlight bulb, find the little electrical gremlin that springs up every now and then and shorts out the ignition.

Oh, I almost forgot to mention the biggest job of all: learn to ride the thing! 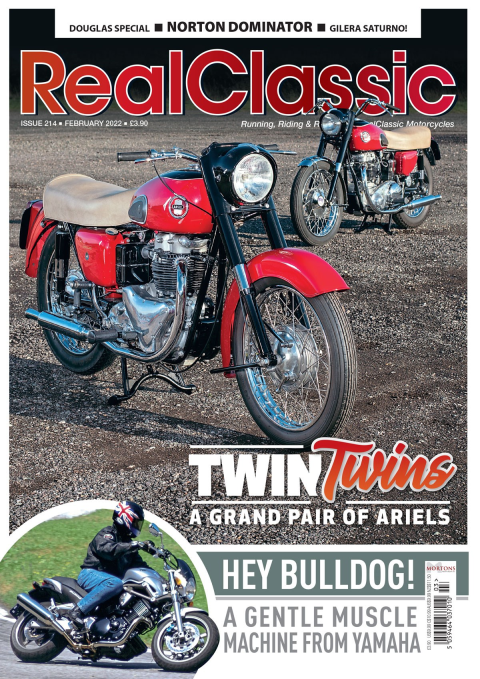 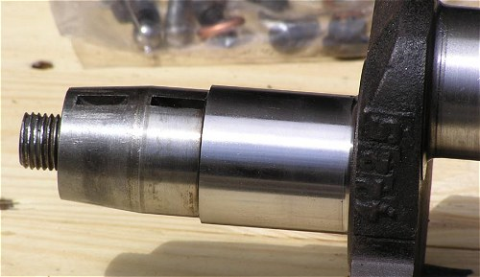 Sunbeam S8 Adventures - Part 4
He bought it, he broke it (OK; maybe it was broke already...) and now he's nearly fixed it. Steve The Toaster finally gets his Sunbeam going again. Was it easy? Was it 'eck as like...
Reviews - 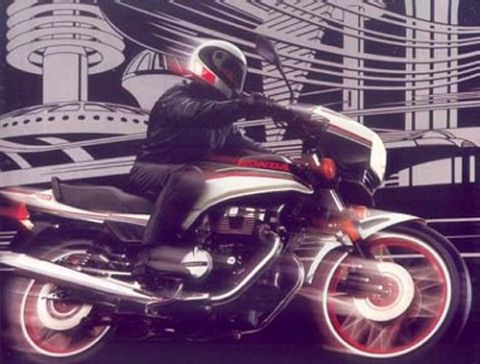 Honda CB400 Twin, Part I
Your definition of a 'classic bike' may well depend on where you live. Chico Rasia, from Curitiba in Brazil, dreams of a 1980's Honda twin...
Reviews - 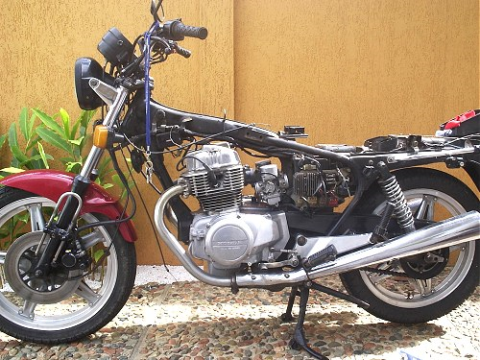 Honda CB400 Twin: Part III
Over in Brazil, Chico Rasia has been making progress with his 1980's Honda twin. Just a few things to fix... oh, and then a few more...
Reviews - 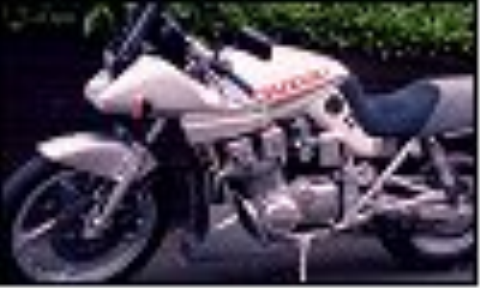 Suzuki Katana
How do you turn a bland UJM into a genuine Japanese classic? You add style, of course. Rowena Hoseason has a thing about pop-up headlights...
Reviews -
Download the Classic Bike Hub app