You probably have an all-time favourite classic bike. Sunbeam Peter (the name is a bit of a giveaway about the model of motorcycle!) explains how his dream bike became a real bike...

'Kevin's found you a Sunbeam,' the good lady said as she waggled the telephone handset at me, 'but do you really need another motorbike?' Her final words fell on deaf ears. A Sunbeam? For eighteen months I had been looking for a Sunbeam S7 to rebuild, dismissing many shiny but suspect examples that started at £2000. What I wanted was an original, un-fiddled with example and being somewhat of a skinflint I had a figure of half that in mind.

Now Kevin is noted for his sense of humour and my response to his description of a black Sunbeam he had found in a shed was less than polite. He insisted this was not a leg pull, it was really there and would I like to have a look at it on the following Saturday morning? Would I like to have a look? A bears/woods question which was easily answered, and he went on to tell me how he had discovered it. Kev is in the furniture and removals business, part of the job is house clearances and these are the guys who get called out to deal with all those bits and pieces which don't go in shroud pockets. You would do a lot worse than to cultivate a working relationship with somebody local to you in this business; they turn up all manner of motorcycling goodies long before the trade see them.

Saturday came and we made our way through a garden that the 'Groundforce' team would have turned and fled from. Brambles snaked everywhere, a tree had grown across the path, the shed was missing its window, had holes in the roof and the door was off its hinges. Inside lay a very sorry sight, half covered with a rotten tarpaulin but unmistakable from its cast alloy silencer. A Sunbeam S8! She was leaning at an horrible angle, covered in dust, the chrome was all gone, paint peeled, heavily oxidised aluminium and rust bitten... 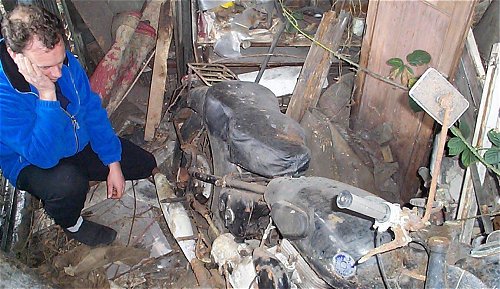 We both just stood and looked at her, Kev thinking I was out of my mind whilst all I could see was the gleaming goddess she would be with new chrome and paint and wheels and... Whilst we gazed a voice came over the gate, then a head.

'Er, do you fellers know about an old motorbike that's supposed to be here, only another feller down the road said it might be for sale?'

A less than polite Anglo-Saxon phrase suggested he might take his search elsewhere and I made the decision. Although it wasn't the S7 I lusted for, I had to have it. 'I've already bought it off the owner's brother,' Kev told me; 'So let's get it in the van before matey there comes back tonight.' 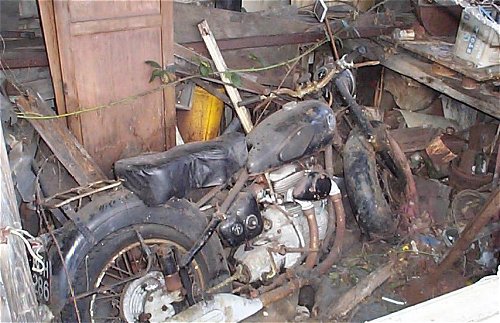 Sunbeam Lesson Number One: They are heavy beasts!

With flat tyres, a shed floor covered in glass and bits of roof to hinder us, it took a bit of moving. Then came the tree; we had to lift her over its horizontal trunk! By the time we got her into the van we were both covered in oil and rust. I couldn't have cared less; the delight of my new toy had me in that spellbound, irrational frame of mind which is always deflated by the ear-bashing which follows when you get home. Which didn't follow on this occasion! All I got was a stunned look and a quiet shake of the head when she saw the state of what I had blown good money on. 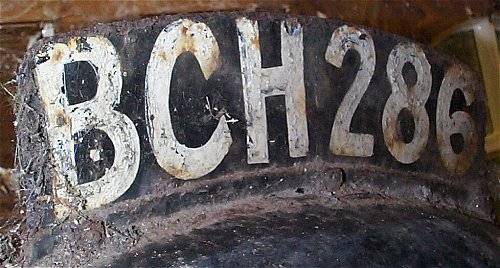 Undaunted I wheeled my prize to the shed and then just sat and looked at it for an hour or so, just gazing at the appalling things that time had done. Details started to register on me. Its last tax disc was valid to October 1961. The dual seat it was fitted with was the wrong type. When I leaned on the kickstart the motor turned over smoothly with a gentle 'whoof' from the air-filter! Scraping crud off the front of the engine revealed a three-figure engine number. A quick look in the archive gave 'S8-101' as the first engine produced, so here we had a very early example, maybe? A flat headlamp glass and the one remaining tank badge with a blue background offered their own clues but, with no paperwork, I was left guessing. 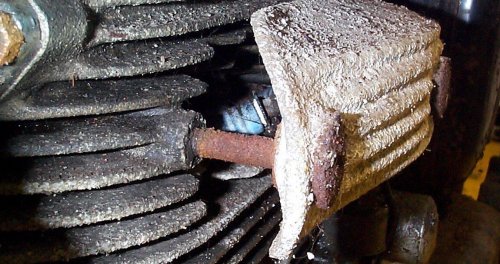 The following Tuesday was rainy and cold. I declared a day of rest and went along to the ex-owner's house with the lads who had the clearance to do. A detailed rummage in the shed produced some gems; the missing tank badge turned up, a tyre pump, rear universal joint (worn out) but disappointingly not the proper saddle. Whilst separating the wheat from the chaff I did get a twinge of guilt, here I was rooting through someone's lifetime, a very different sensation to the usual mercenary haggling and nit-picking which goes with most purchases. I found myself putting things back in their proper place as though the chap was stood there watching me. A bit spooky really. 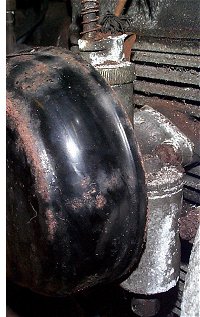 One of the lads broke my solemn moment. From a drawer came the logbook and a sheaf of other paperwork, including the HP company's paying-in book and a letter which confirmed final payment of the loan and asked him if he wanted to borrow some more! There it was, registered on 21st May 1949, engine and frame numbers correct, ownership passed to my predecessor on 8th October 1958 after he bought it from Geneva Motors in Bootle. The dull day brightened, we have some history!

Later that week and, after pointing the camera at it for the 'before' shots which must accompany its resurrection to shining glory, I was planning where to start the ripdown and rebuild. I was sat with mug of tea and contemplative ciggy, when the seedling shoots of an idea appeared... why not just get it going and leave it looking like this?

Now that would be different, wouldn't it?

What happened next? We don't know. Peter hasn't told us yet. You'd better nag him to write another installment! 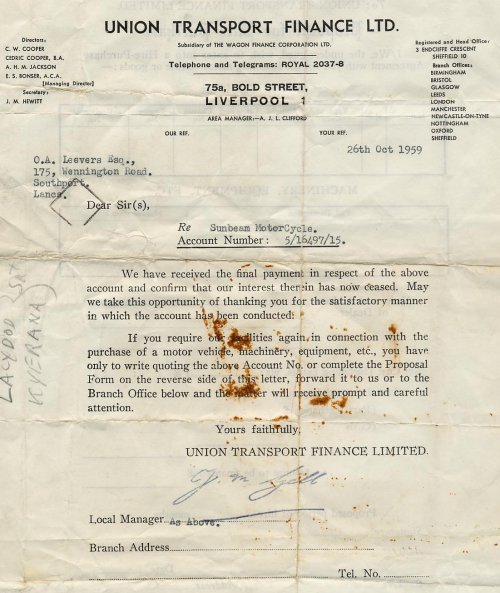 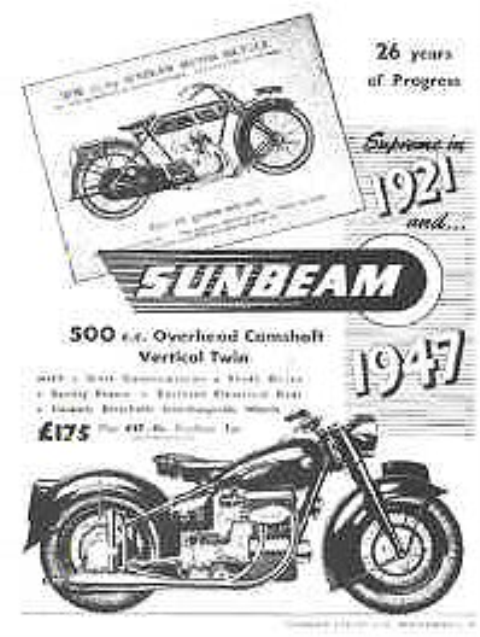 Sunbeam S8 Search
If you frequent the Message Board then you'll know that Steve The Toast has been successful in his search for a Sunbeam. But how did this fascination begin, and what did he initially discover?
Reviews - 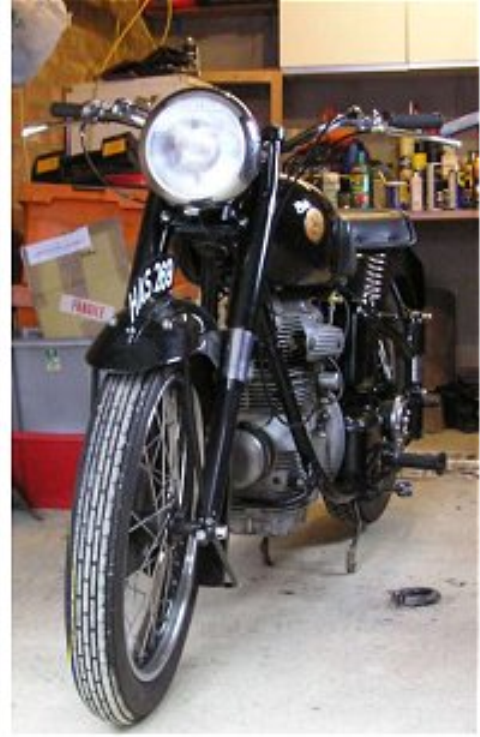 Sunbeam S8 Adventures - Part 2
After falling in love with the dream of a Beam, Steve The Toast finally bought an S8. The reality turned out to be just a little... leaky!
Reviews -

Sunbeam S8 Adventures - Part 3
Steve The Toaster strips his P&J and finds that the inevitable has indeed come to pass... not only that, there is, indeed, no such thing as a quick fix. Next stop? The bank balance void...
Reviews -
Download the Classic Bike Hub app