After a series of high powered modern bikes, Noggy 88 is inspired to return to the Brit Iron of his youth. This in turn provokes another purchase - he explains all, in this tale of two twins...

Some of you may remember a time some four or five decades ago, others may not, so for the latter, they were days when the sun shone from dawn to dusk, everything was positive, and Brit Iron ruled the roads. Halcyon days. The Four Wheeled Mobile Greenhouses were few and far between and personal transport was mostly two-wheeled - pedal-powered Raleigh and Hercules in the main but the motor bicycles bore the names of firms with their lineage deeply rooted in Birmingham, Meriden, Redditch, Bristol, Cleckheaton, Stevenage and Plumstead.

(I did know a well-heeled young chap who had a foreign bike, German BMW 250. He was a vegetarian. I knew no one else with a machine that was not Made in England).

The Japanese had not arrived, on the public roads at least; the BBC Light Programme had provided us with the new and exciting sound of the racing Honda Fours screaming their way around the Isle of Man TT Course. The cognoscenti among us were prone to remark with the confident knowledge of An Expert; 'They'll be back again and next time they'll win.' They did come back, can anyone remember if they did win?

So I got my first bike. 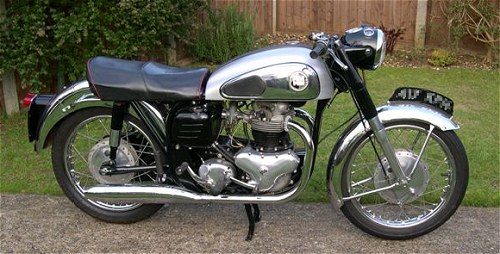 An Ariel Colt. The 200cc model LE, all 8 brake horse power of it. I was King of the Road. I learned to fall off without too much pain on this bike during my progress towards the Triumph Twin.

The big Triumph duly arrived, a 500cc Tiger 100; all I could afford but it was quick, comfortable and reliable. By now a new model 650 had arrived, it was called the Bonneville and had been timed by The Motor Cycle at 117mph; good, but it would never replace the Ton-Ten. Or so I thought. Oh, those foolish ideas of youth! Then, Norton brought out Bracebrige Street's ultimate roadburner, the 650SS, timed at 118mph. That was the bike for me. I had to have one!

I never progressed beyond a 500 and my last Brit Bike went in 1973, another Tiger 100. It had already been replaced for everyday use by a Yamaha 350cc YR5, which I must admit, I found to be a superior piece of kit. Who or what possessed me to replace a Triumph with a Yamaha? Jarno Saarinen, that's who. The first racer I remember to use the knee-down technique. Arguably the greatest racer ever - no, look it's a pseudonym at the top of this article and you don't know where I live, so, Jarno Saarinen, The Greatest Racer ever. Better than Les Graham, better than Geoff Duke, better than Hailwood or Agostini - so vent your spleen not on my anonymous doorstep but on the message board!

As time passed, the boys left home, the inevitable and superlative FireBlade came and went to be replaced by a Pan European. Excellent bikes, but something was missing. The charisma of Brit Iron; I had just got to get back to it. But what to buy? The Ton-Ten, a Wideline Norton, an AMC twin? Not a Royal Oilfield, not an Ariel, not a Beesa; at that time they just did not strike a chord with this would-be classicist, although I am no longer sure about this. An A65 appeals. Perhaps a deep seated hang-up in a corner of the mind dissuaded me. Either that or a new-found interest in a classic bike magazine in which I seem to remember something being written about Bert Hopwood who built a 500 twin for Norton, utilising a better cooling design for the cylinder head than Edward Turner had for his Triumphs.

I'll believe anything so a Norton it had to be, and a 500, that's what they were originally designed to be and I can still remember the 1950's advertisements for the Dominators with the flowing line of their tanks and that phenomenal Featherbed frame. Performance was no longer a priority, preservation of life into the next stage of middle (OK, old) age, is more important now. 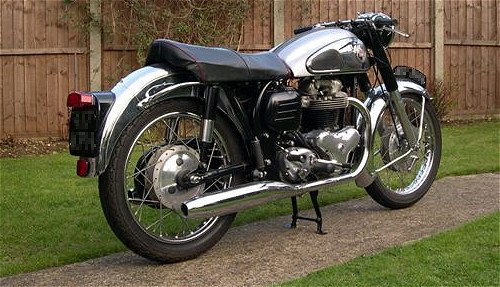 Noggy feels a bit 'bobbly' in the ride department; anything would after a Pan European, but I think that it is the Roadholders that cause the 'bobbling'. A blip of the throttle and the exhaust barks again, several blips, mainly to hear the noise, and we're up another 15mph. Hold it steady at that speed; test the Featherbed on the right-hander that I'm approaching, lean into the bend and the world goes smooth, really smooth. This is the Featherbed effect and Noggy corners on metaphorical rails.

Will it be the same on a left-hander? We'll soon see, 100 yards on then Noggy and I are heeling over to the left. Infinite smoothness again. The grin is replaced with whoops of joy. Not for us the motorways and dual carriageways. The B-roads and unclassified country lanes are our forte. These are the roads that the 50 year old British design was made for. Onward and onward, swooping through bends, exhaust crackling as we crest the hills, diving through the descents. This is Norton - rider and machine as one. What a fabulous motorcycle! The riding experience shows this to be the forerunner to the Fireblade and every other modern Japanese sports machine. They, with their multi-cylinder engines, reliable electrics and advanced frames are good, very good in fact, but not so much fun as the Brit Iron 500 twin. Classic motorcycling!

More roads, more bends, more picturesque villages to pass through - Norton is the greatest (with all due respect and apologies to Muhammed Ali). Except for the brakes! I am, after all, accustomed to one-finger actuation of powerful twin discs and stopping on the proverbial sixpence. Not to worry, I just want to 'go' on Noggy, not 'stop'. So many roads, so little time! Even in the rain, Noggy inspires huge confidence - why didn't I have one when I was that callow youth some 45 summers ago? Money, probably. 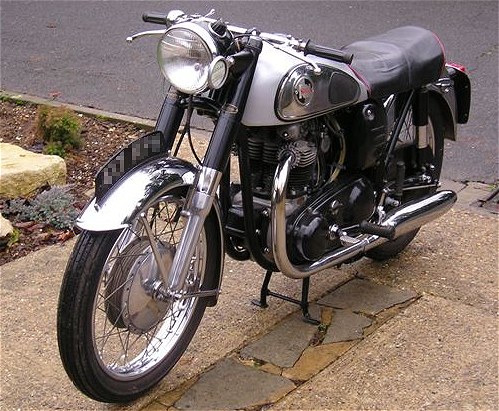 Things are a bit different now financially and despite my ultimate regard for Noggy, the 500, I still felt that I had missed out on the 650. So, a fair bit of overtime later, on a trip to Suffolk I make a 647cc twin mine! It's certainly different from Noggy; taller with more urge. The exhaust is muffled at first then an offbeat boom comes in as the revs rise. I am sure that it is faster than the 500 but it doesn't seem to be so urgent. I am also sure that the roadholding is just as good as Noggy, but it doesn't turn in so quickly. It certainly starts easier than the 500 and shows lashings more torque but I'm not sure that the engine is so easy at low revs. There certainly is far less vibration at high revs, which makes the larger capacity machine a far better bet for day to day transport and all-day touring. The suspension on the 650 is good, comfort is good, the brakes are good, everything is good - but it is a little anodyne and sterile compared to Noggy.

I like the 650 but can't get excited about it. Even the beat of that 6-valve V-twin motor - (that WHAT motor!?). Oh, sorry, did I forget to mention that the 650 is a modern Honda trailie? And before the screams of protest issue forth, I'm willing to bet a pint or two that in 45 more years, if it survives, the Honda will be in the hands of an ageing enthusiast who regards it as a classic. I wonder what that owner will call him?

Can you guess which model Noggy's modern 650 twin is? 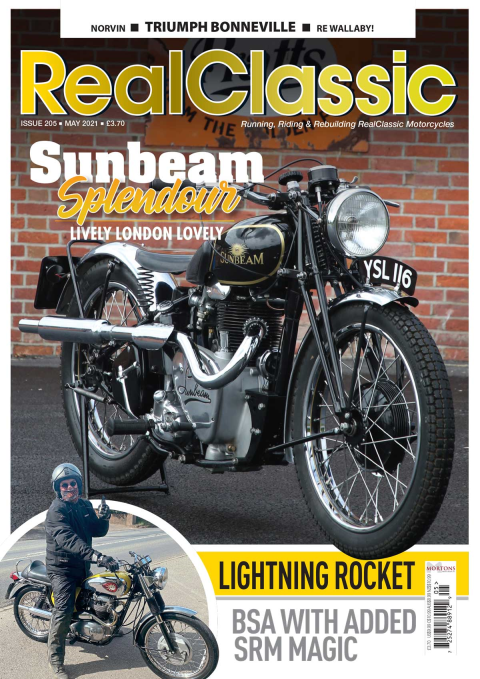 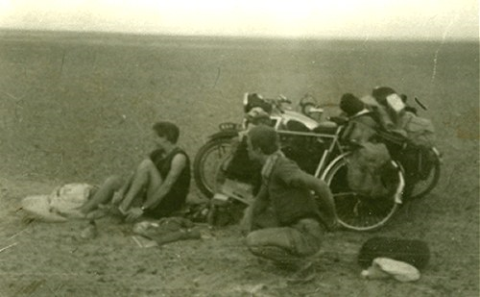 To Pakistan On A Norton 77 - Part 4
After travelling through the world's troublespots two decades ago, Goat Maison finally made it to Pakistan aboard his pre-featherbed twin. But the going had been tough...
Reviews - 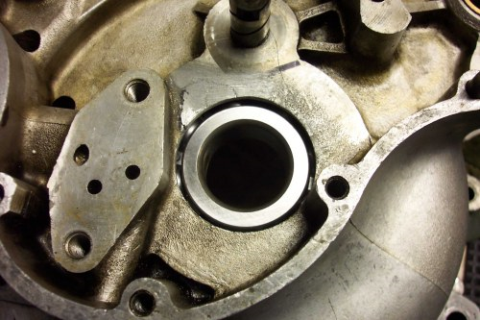 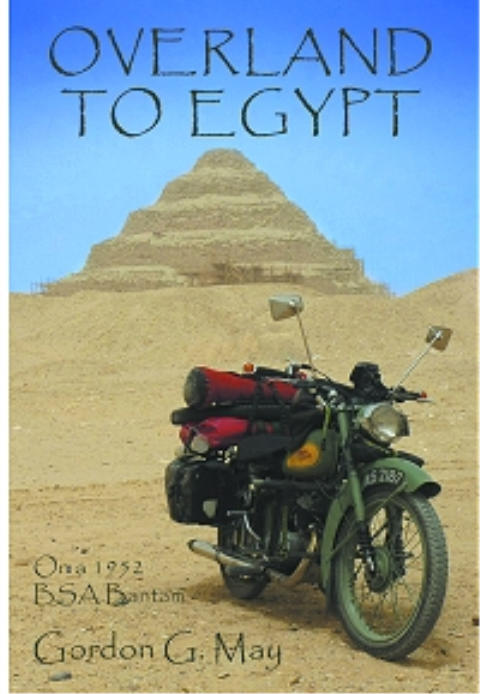 'Overland to Egypt', by Gordon G May
If at first you don't succeed (and indeed your Bantam conks out before it even leaves Europe), try, try, try again. And then write a book about the experience...
Reviews - 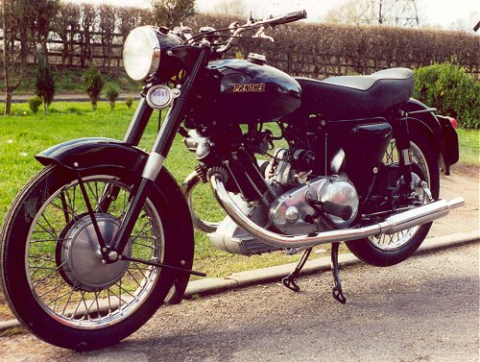 Panther 100
Old bikes never do quite what you expect them to. Steve Allcott was reunited with his dad's Ceefer and ploughed a field with a Panther. Just don't comment on his Thunderbolt!
Reviews -