Most people tend to plump for one of the well-known Morini Sport or Strada models. But at opposite ends of the scale you'll find the super-sleek Dart and the rufty-tufty Kanguro. So how did Ken Philp comes to own both?

I first saw a Kanguro at Earls Court in 1982, and was impressed as it was an off-road V-twin. I had a medical problem in 1984, so got rid of several bikes and bought this one, the first Kanguro which NLM had in the shop. 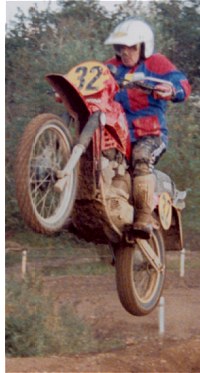 I can't say there was anything that I DIDN'T like about it. I used it for enduros, trail-riding, Weston Beach Race, long-distance trials, and so on, and once covered 720 miles in 20 hours on an MCC event.

In total I covered about 16,000 miles. There were no real problems, only those that were my fault!

Anyone buying a Kanguro should keep clear of the first X-models. The X1 and X2 have tubular frames, and the X cracks the frame at the right footrest point. The X1 has reinforcement there.

The headlamp is only AC direct light, so output varies with engine speed. It's also a 6-volt lighting system, with a VERY small battery!

So, having owned the Kanguro from new, I really was very impressed with the motor. Then I saw a photo of a new Dart in the press, and wasn't too impressed - until I saw one close-up at the Earls Court Show in 1998... I positively DROOLED! So I watched NLM unpack the first one they had from Harglo, and bought it straight away.

It's a June 1990-registered Moto Morini Dart, so is now almost 16 years old. It's got 54,000km on it and is still in very good condition. It's had a few mods, all done by me - like the right foot gearchange / left foot brake, a Honda NTV650 hydraulic adjuster on the rear Marzocchi monoshock, alloy tank, and handlebar raisers. 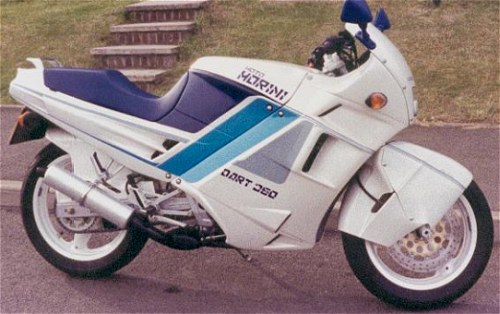 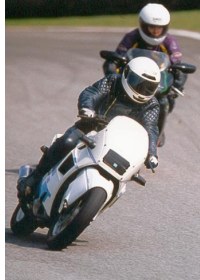 I also fitted it with a K&N air filter, with suitable jet changes, and a Y-piece in the exhaust in place of the unobtainable expansion chamber, and a Micron exhaust can off a Ducati 750SS. The latter was done partly to reduce weight, partly to make it sound a proper V-twin! It's also had extra spacers slotted in above the internal fork springs.

Without doubt, its best features are its looks, and performance. The Dart is not particularly fast (I've seen a max of 101.1mph on my digital cycle speedo - which is very accurate, by the way), but the handling is SUPERB! It's also economical and has given 64mpg over its life (I have a record of all the fuel used from new). It's comfortable for a shortie, and it's taken us on a couple of Continental tours two-up. 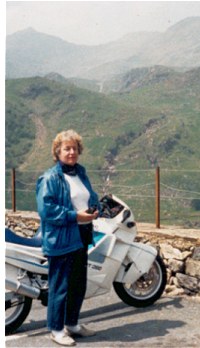 On the downside, the alloy petrol tank only holds about 12 litres, but the original was no better. It tends to wear through the rear tyre quite fast, but that may be my enthusiastic right hand! More seriously, checking the oil level is a right pain, and the oil level warning light sensor is no longer available.

If you were going to buy one then check the plastics carefully for damage. The panels are expensive, if you can find them. Motor parts are readily available, but starter motors are scarce - mind you, I haven't needed one, though. 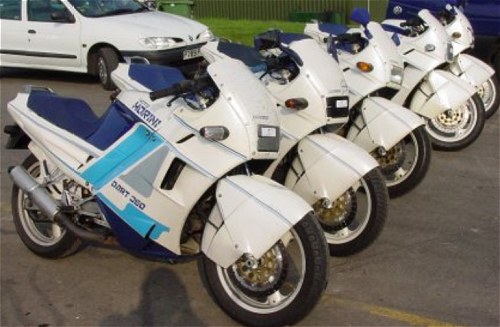 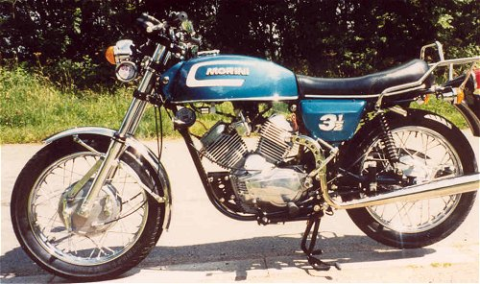 Moto Morini 3½ Strada
It's a winner! When Graham Holt's gleaming Morini 350 appears at events it has a habit of stealing the show...
Reviews - 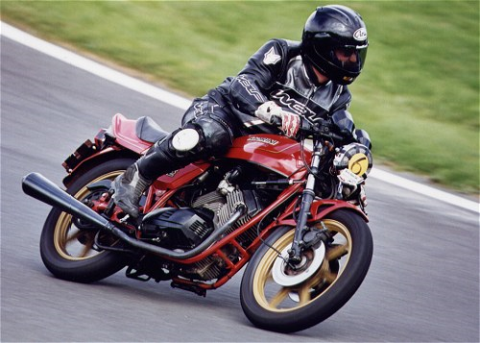 Morini Riders' Club Track-day
Martin Gelder gets a bit carried away at his first classic track-day. As does his Moto Morini Three-and-a-half. On a trailer. Oh dear...
Reviews - 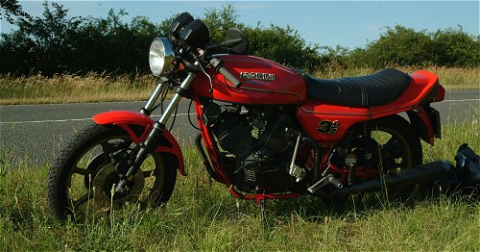 Moto Morini Three and a Half - Cinque: Why I Hate Exams
Flaming June. And flaming revision. Martin Gelder promises himself a post exam Real Classic ride, but ends up stuck in the shed writing lists of things to do and things to buy...
Reviews - 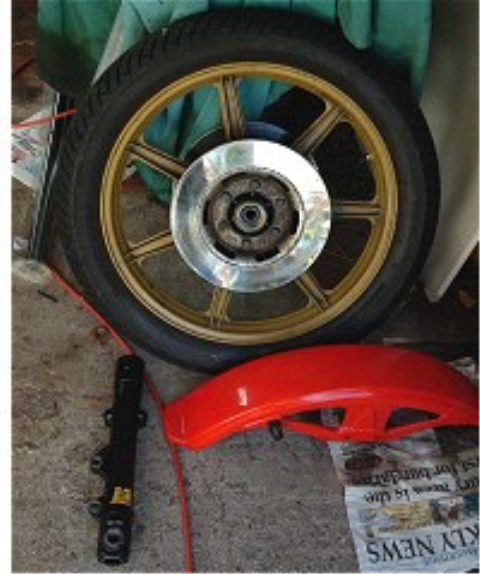