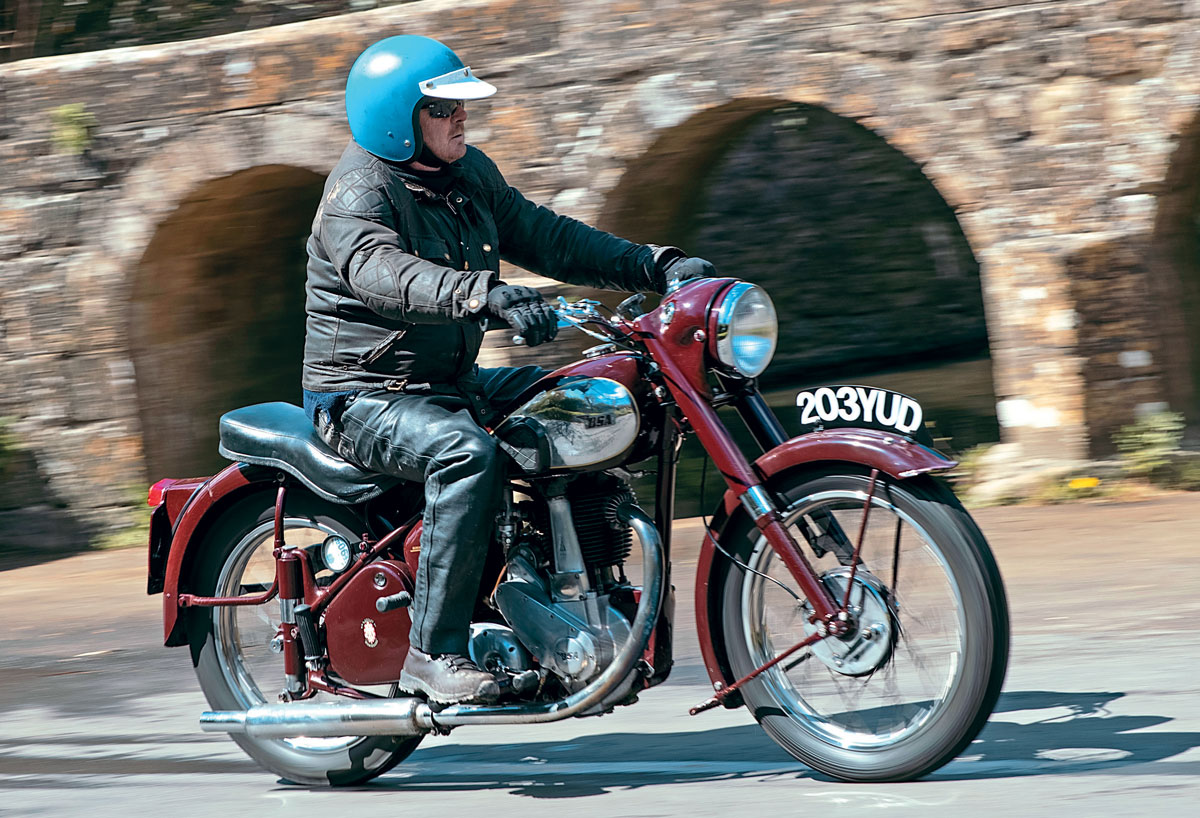 My first impression while checking out the BSA B31 was that it looked solid. There’s not really any other way to describe it.

For a mere 350, the BSA appears to be a big motorcycle – it’s no bigger than a Matchless or AJS 350 from the same period, but it does appear to be taller and a little heavier. This might be down to the BSA’s colourful paint job and the heavy use of chrome. AMC bikes tended to be available in any colour you wanted as long as it was black, which makes them look more compact.

Starting the B31 from cold has a ritual much the same as any 1950s Magdyno-equipped single. I straddle the bike, retard the ignition with the bar mounted lever and tickle the Amal carb, then use the decompressor to turn it over a couple of times on the kickstart, then continue to bring it just over top dead centre (TDC).

Now I give it a tiny bit of throttle and some choke. Then I place a foot on the kickstart and give it a good, solid swing. As the kick swings to the bottom of the stroke, the momentum of the big flywheels takes the crankshaft round again.

The engine splutters on the fuel added to the combustion chamber by tickling the carb and stops. A second kick sees it fire up with the choke, keeping things running while it warms up. An engine as soft yet as solid as this should start easily enough in three kicks. Any more than that and you might want to think about troubleshooting rather than thrashing away and turning yourself into a puddle of sweat and frustration.

Now advance the ignition. Retarding it can help acquire a steadier tickover or reduce the need to slip the clutch if you find yourself plodding along at low speeds in traffic, but I didn’t need to touch it again. Warmed up? Push in the choke and off we go. 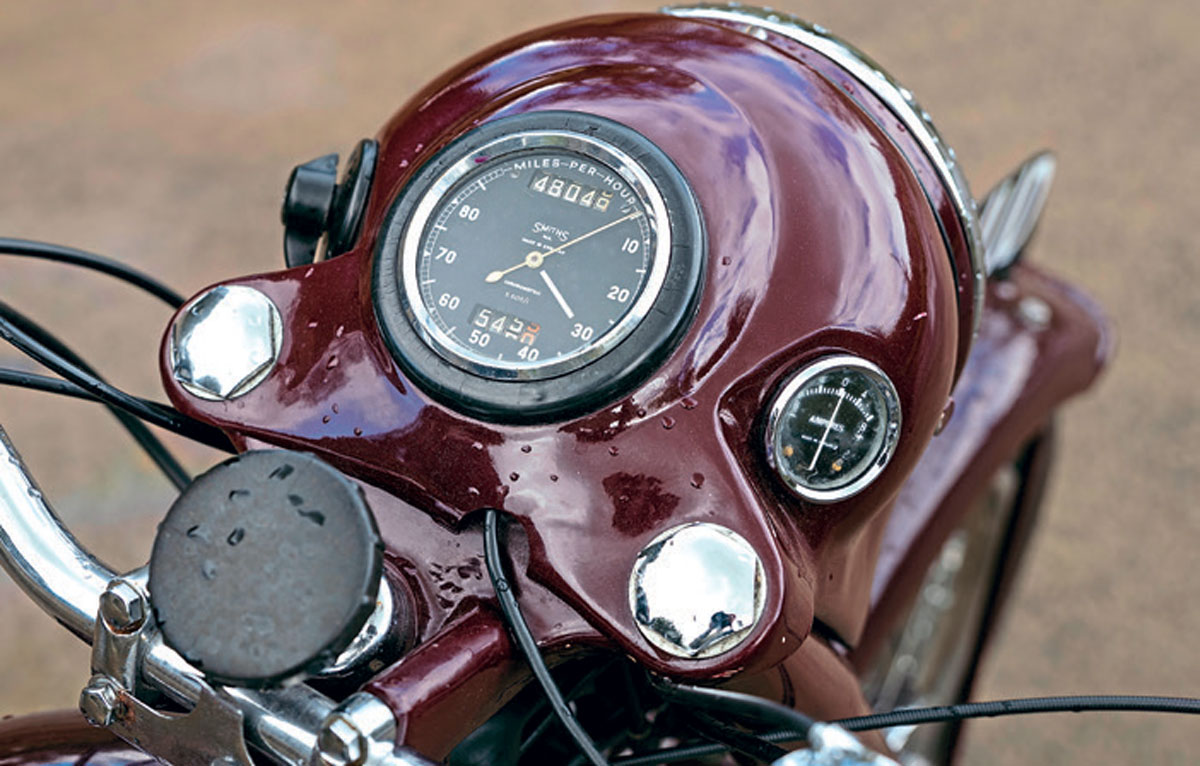 The BSA one-up three-down gearbox is an excellent device but I didn’t expect it to slick-shift. Small Heath’s pre-unit boxes have a long-travel action that needs to be followed through with the foot until the gear is fully engaged.

As this was a heavy old duffer, I didn’t find the need for rapid changes. I engage first, chuff off, and, giving it a bit of time between changes, it happily clunks into second, then third, as we pull away. It will pull away from a standstill in third if you ask it nicely. Then off onto the open road we go, the ‘blat’ from the exhaust disturbing woodland creatures in the hedgerows.

On a bumpy and gravelly country road the plunger does a reasonable job of soaking up the worst of things but, in any case, riding the B31 is so effortless I have plenty of time to observe the road ahead and avoid the more obvious hazards. Cornering is best described as ponderous and steady. I chunter on, head up, hands lightly on the bars, enjoying the whole “hello trees, hello sky” experience.

Performance of the plunger equipped B31 is that of the archetypical workaday British single. No doubt you could thrash it up to 70 but it would not be kind or, for that matter, enjoyable. You can cruise in comfort at around 50-55mph all day, though. We are late back, which speaks volumes.

If you are searching for something easy to work on, and something that’s solid and mostly reliable, the B31 is as good a choice as anything. Usable on modern roads and with more than a touch of class, the BSA won’t get too much adrenaline flowing, but it does have a large grin-making enjoyability factor. 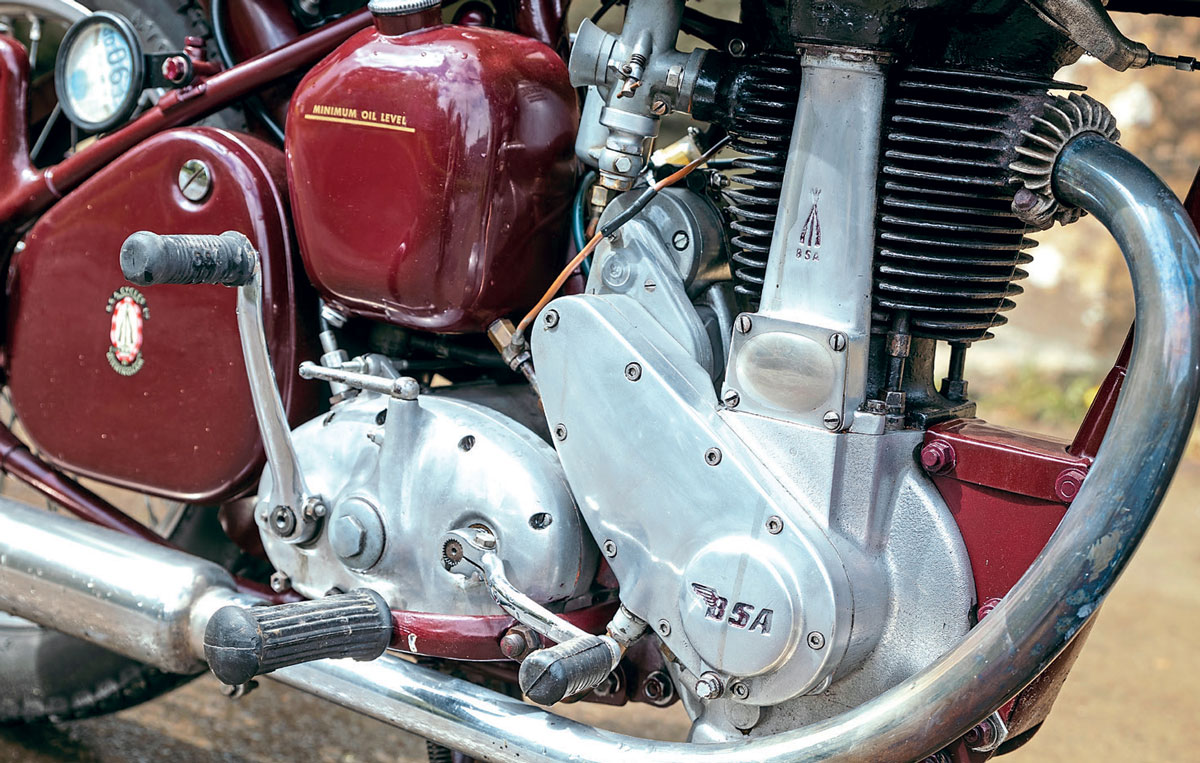 BSA’s B31 is unusual in the classic world, in that there wasn’t really much of a gap between it being ordinary workaday transport and it becoming a classic worthy of restoration and loving care. Many a B31 has rumbled on, refusing to break, for years. Even today you’ll see the odd B31, tired and careworn, providing day-to-day transport.

In the 1940s motorcycles just had to work and be simple to fix by the average bloke when they went wrong. Most of the new models available were developed from machines of prewar origin.

BSA came out of the war with a reliable side valve single, the M-series, which had been well and truly tested in the toughest of environments. Its first new postwar bike was the B31 A 350cc OHV single, based on designer Val Page’s 1940 B29 model. It used the bottom end of the M-series side valve, mated with a cast iron barrel and an OHV head.

The bolted-up crankshaft and roller bearing big end was supplied with lubricant via a double gear oil pump which required the use of a kink in the right-hand lower frame tube to make the engine fit. The black painted cast iron barrel and head had the added benefits of not showing up oil leaks.

Power was transferred to the gearbox and back wheel through a dry clutch. This is not a dry clutch in the modern sense, as you might see on a Ducati V-twin with no lubricant at all getting close to the plates.

The real innovation on the B31 was BSA’s own version of the new-fangled telescopic forks, which were transforming motorcycling. These had six inches of travel – enough to make them useful off-road. 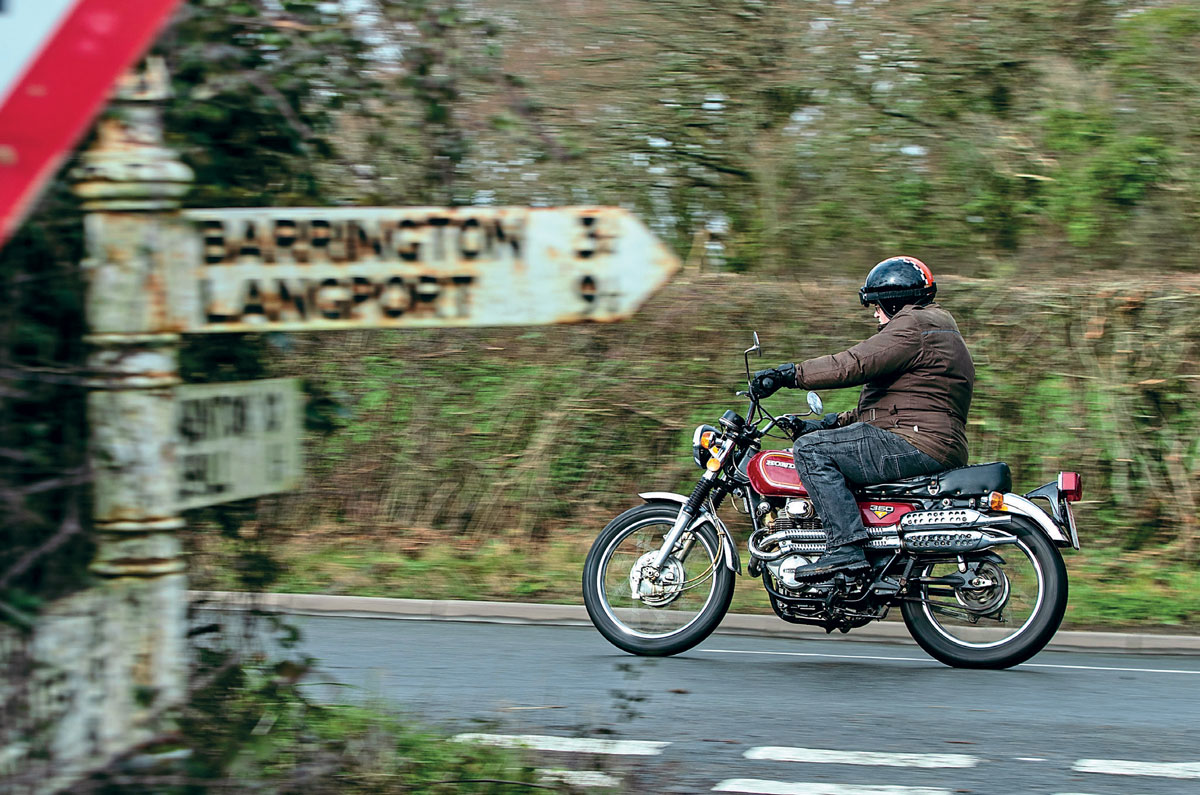 There were external springs under the shrouds and hydraulic bump stops in compression but no dampers on the rebound, producing a loud clang if they bounced back hard. Versions of the fork stayed on BSA machines for almost two decades.

The clever design of the signature pushrod tunnel and the tappets meant that the valve clearances were adjusted at the bottom of the cylinder rather than the top, which made for easy and accurate valve clearance settings and, as a result, less top-end rattle than most.

The engine was tough enough to be turned into the B33 500 by simply expanding the bore, and was quickly souped to create the sporting B32 and B34 and, ultimately, the Gold Star.

Shiny sports bikes were all very well but a manufacturer needed cheaper, more reliable workhorses to make money, and the B31 and B33, along with the A7 and A10 twins, were where that money was.

Development was slow. Trim was changed periodically, the dynamo improved, and the plunger frame introduced. To allow BSA to keep flogging its old rigid frames with some semblance of suspension, it used a pair of simple plunger devices connected to sliders that allowed the rear wheel spindle to go up and down, with a spring above and another below.

Damping wasn’t included beyond filling the plungers with grease. The rigid and plunger options were joined in 1954 by a new duplex cradle frame, which improved the handling dramatically but also added a lot to the weight.

The B31 and B33 got the much better gearbox from the A-series twins, too. There were changes to the engine shaft shock absorbers, and for two years and for reasons best known to itself, BSA reversed the operation of the advance/retard system. 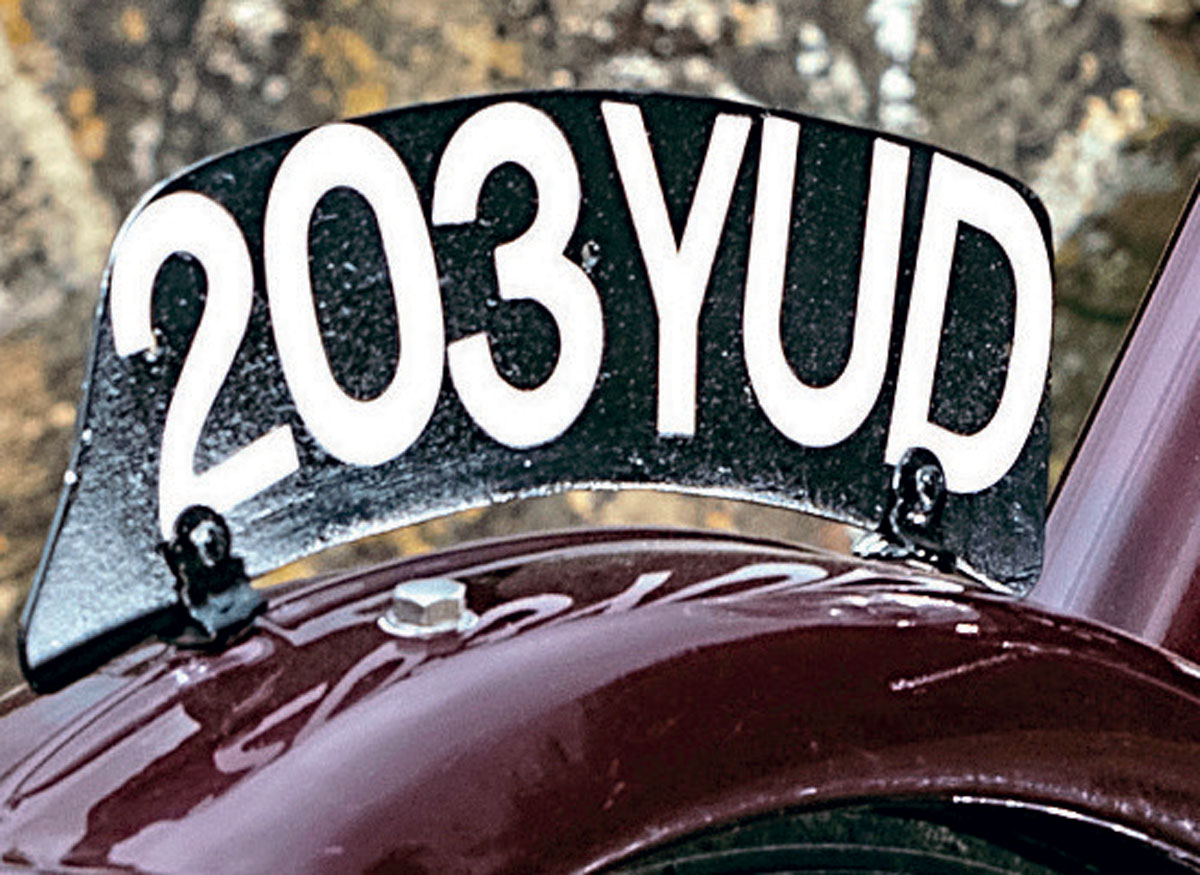 It got Ariel brakes in 1956 and then, in 1958, it got better Triumph brakes. AC electrics arrived with the introduction of an alternator and battery and coil ignition to replace the by now outdated Magdyno.

The B31 chugged on in this form, with changes to the mudguards and the petrol tank for a few more years. By 1959 BSA was well on its way to bringing on its new unit construction models, with the C15 250 starting to replace the old thumper.

The B31 went out of production, to be replaced by the B40 unit single. BSA seemed to have decided that the demand for lumpy old singles was rapidly passing.

The Motor Cycle tested the rear-sprung B31 in 1956 and praised its practicality and all-round ability as a general-purpose mount. The test bike started first kick and managed 73mph. The tester liked the range from the substantial petrol tank and described the 105mpg at 40mph fuel consumption as “remarkably good”.

The Motor Cycle had a bit of a thing for quiet motorcycles and described the B31 as having a “full, mellow tone”, which may have been shorthand for “a bit loud”.

You could tour on it at 60-65mph at half throttle, at which point “vibration was perceptible through the dual seat”, which strikes one as a masterpiece of understatement. The tester called on BSA to make the optional rear chaincase a standard.

The gearbox and clutch were smooth, though the tester did have issues selecting neutral. The brakes, Ariel items on the model tested, were praised (which may surprise those who have experienced them), while the 6v headlight was, apparently, perfectly suitable for use while travelling at night at 60mph, implying an element of devil-may-care bravery on the part of the rider. 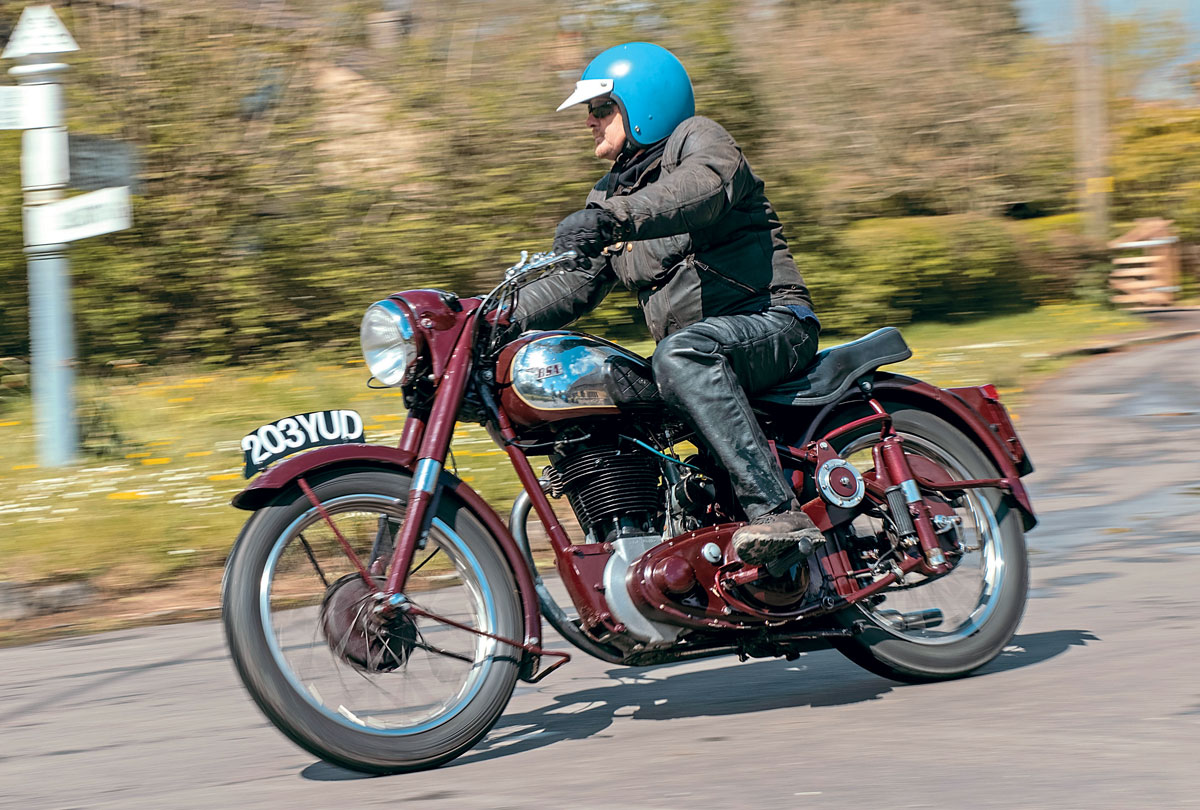 The contact breaker, which was situated behind the cylinder and partly hidden by the primary chaincase, were “readily accessible” – which is debatable, though the tester did express some concerns about the problems with removing the high-tension pick-up brush holder. Concluding, they said: “The B31 is an attractive model for the rider who wants an easy-to-handle all-rounder but who is not insistent on a high maximum speed.”

The plunger frame was a mixed blessing. It improved rider and importantly pillion comfort, but did allow the rear end to wallow and the B31 to weave at speed, especially once the plungers had worn.

With no actual damping, the plunger units are packed with grease and this needs regular replenishment. Roy Bacon suggests that having rust on the inside of the damper covers and the fit of the wheel hub to the frame can also help damp the suspension (!).

The swing arm frame is one of the better items of the period. For a mass-market offering it was excellent and very similar in appearance to that used on the bigger twins and the Gold Star. It was almost as good as the famed Norton Featherbed.

Rear shocks were fully shrouded Girling shock absorbers, and shrouded Hagons are available if you want that original look.

The brakes got better as the years went on, with the best being the Triumph offerings on the last models.

As the B31 got older, it got heavier. A rigid model with a good sprung saddle isn’t that uncomfortable, except for the pillion. Without the additional weight of suspension, they are a good deal sprightlier than later bikes. The plunger rear end added weight and sprung comfort.

The last sprung models handle extremely well, have better brakes and electrics, and are more reliable, but the extra weight does impede forward momentum. Saying that, the B40 that replaced it, despite being 60lb lighter, was only 5mph faster.

Prices are steadily rising as more classic riders are hunting for something easy to start and easy to live with. A good running example will cost between £4000 and £6500, depending on condition. Five years ago, you could buy one for half that. Although the rigid, plunger and swing arm versions are all very different beasts, they all cost around the same. 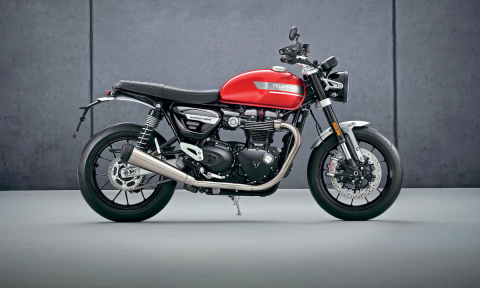 Review: Triumph Speed Twin
Triumph reveals the new for 2021 Speed Twin. We have a look at what to expect
Reviews - 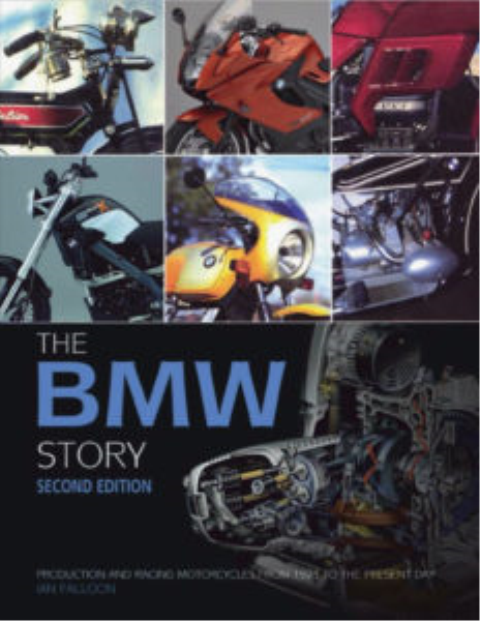 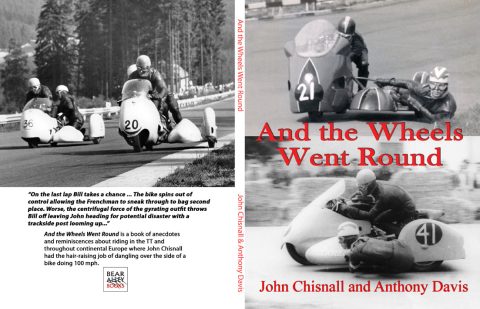 RealClassic Reading
‘And The Wheels Went Round’ by John Chisnall and Anthony Davis was published last year. Roy Workman is a sidecar
Reviews - RowenaH 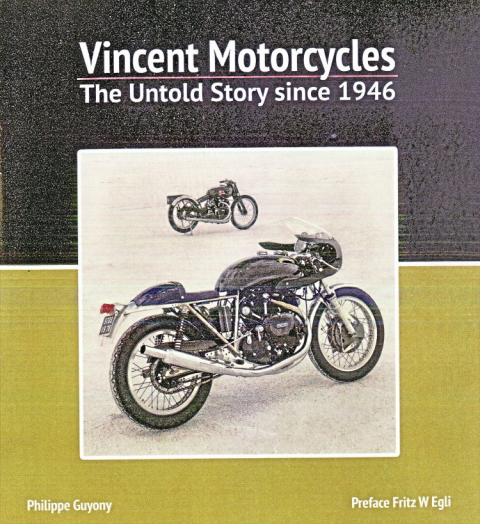