Past masters, Grand Prix heroes, world champions and TT winners will be appearing at various events in the UK this summer. Classic riders can join them on track, too...

An array of famous riders including Sammy Miller, six-times TT winner Jim Redman, Nick Jefferies and MotoGP man Scott Redding are already scheduled to appear at this year's Thundersprint on the 10th and 11th of May 2014. They're now joined by TT racer John McGuinness who will swap the 37¾ miles of Manx roads for the more sedate surroundings of the Darley Moor circuit in Ashbourne, Derbyshire.

'The length of a lap is a bit different from the TT,' says McGuinnes, 'but Darley is a great little track and a lot of fun. In some ways, the Thundersprint is very like the TT because there is a really relaxed atmosphere for the spectators with mums and dads and the family dog there, alongside hardcore race fans. The difference is that no matter how much I want to be with fans, the TT is a serious business and my mind has to be focused on racing. 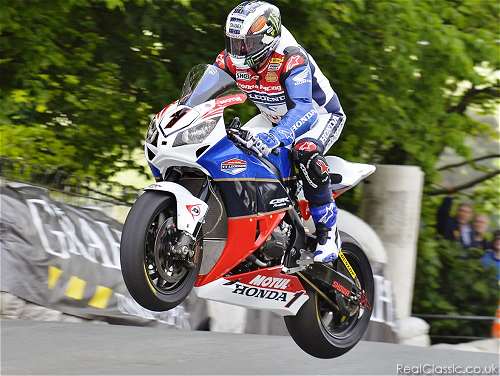 'The Thundersprint will be completely different. I will have all the time in the world for fans and when I am not having a play about on the track with Scott Redding and Nick Jefferies then I will be in the paddock talking about the TT. It's going to be a great weekend and I'm really looking forward to it.'

Thundersprint organiser Frank Melling said: 'John is one of the all-time greats of TT racing and is very much a riders' rider. We watched John break the 130mph lap barrier from the banking at Creg Ny Baa and he was so elegant and smooth that he made it look like a Sunday ride out. That's the sign of the best of the best.'

Meanwhile, the protagonists in one of the greatest races ever witnessed at Mallory Park circuit will make a return visit to the Leicestershire venue this summer to take part in the all-new Mallory Bike Festival on the 11th to 13th July 2014.

Back in 1971, multiple world champion and TT winner Giacomo Agostini and Britain's own John Mooneyes Cooper lined up to take part in the race of the year at Mallory in front of a massive crowd. Cooper rode a BSA while Ago was aboard an MV Agusta. A thrilling race ensued and, against the odds, it was the British bike and rider which claimed victory by just three-fifths of a second.

Both riders have now confirmed that they will attend the inaugural Mallory Bike Festival, where they will no doubt be recalling that historic race along with many other moments from their remarkable racing careers.

Initial details of the Festival were unveiled this week by Real Motorsport Ltd, who have taken over the running of the circuit. Behind the re-launch are biking enthusiasts and businessmen Eddie Roberts and Stuart Hicken. Unveiling the new event, Eddie explained, 'Mallory has previously played host to the Festival of 1000 Bikes, which grew to be the largest classic track event for motorcycles in Europe. The Mallory Bike Festival will be very much in the same vein. It will be great to see John and Ago back here at the scene of one of the standout races in both their careers and they will just be part of a big line-up of star riders, both past and present.'

As well as the riders, the organisers are putting together one of the biggest line-ups of classic machinery to be assembled anywhere this year for both static displays and on-track action. Motorcycle clubs representing makes from around the world will be gathering at the event while there will be trade stands, displays and entertainment to keep every member of the family amused.

Anyone interested in taking part in the Festival can ring 01455 502214 or email info@realmotorsport.co.uk

And finally, we don't have all the details yet, but we understand that the theme of this year's Beezumph Rally at Cadwell Park circuit will be 'triples unseen'. That probably doesn't mean invisible motorcycles (shame...), but instead a display of rare, unusual, and seldom-seen three-cylinder machines. Beezumph celebrates all that is brilliant about original BSA-Triumph triples, and gives classic riders a chance to take to the track on all kinds of bikes.

Organised by the TR3OC, Beezumph 23 is on July 11th and 12th 2014 and incorporates a variety of circuit sessions for riders and plenty to do and see alongside the track. The Friday will feature rally activities; ride-out, autojumble, technical workshop and evening BBQ, with track sessions on the Saturday. Classes range from entry level (two 15 min sessions, cost £30) to fast classic, expert classic, etc. Classic classes are for bikes built before 1986; there's an open class for other motorcycles. 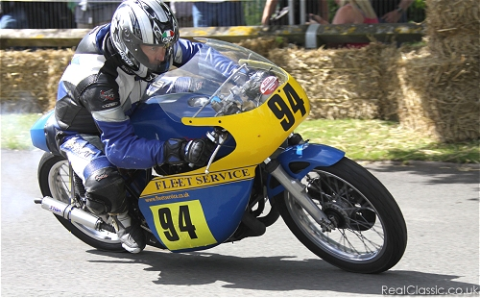 Thundersprint Imminent
The first of the season's classic track events gets under way this month, with the Thundersprint on April 21st. Plus a superstar signs up for the Festival of 1000 Bikes, and there's a four-cylinder theme for Beezumph 22...
News - 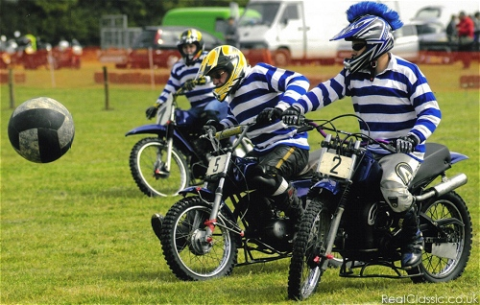 Autojumble Auction
In this newsround: driving licence fees are set to fall, save money on classic bike insurance, a new autojumble auction in Kent in September, classic racing, historic camping, and more...
News -