Vehicle enthusiasts set for bumper February in the South West

Motorcycle owners and riders will be treated to the Carole Nash Bristol Classic MotorCycle Show this coming weekend – February 7-8 – while The Footman James Great Western Autojumble will have something to offer every petrolhead when it runs on February 14-15.

Nick Mowbray, exhibition manager behind both events, said: “Hosting back-to-back weekend events is an exciting proposition and we look forward to delivering a superb show experience for those passionate about two and four wheels.”

Both exhibitions focus strongly on trade with several sellers of tools, spares, parts, jumble and memorabilia confirmed. The two will also showcase stunning examples of restored machines with the region’s most popular enthusiast clubs and private collectors displaying bikes and cars at the first and second events respectively.

One notable highlight is a 1963 Apollo GT 5000S, owned by Ernie Warrender, which will be in attendance at the Great Western Autojumble. An iconic machine of the 1960s, only around 40 were built during the original production run and Ernie’s car is the only one of its kind in the country.

The Classic MotorCycle editor James Robinson also commented on the excellent efforts made by the clubs: “Last year at the bike event there were several creative displays from the clubs with a motorcycle stable from Wells Classic Motorcycle Club and an old style 1960s shop created by the local Norton Owners Club.

“The ingenuity carries across to the autojumble too where this year there’ll be a specially created Rock ‘n’ Roll drive-in exhibit, courtesy of the Volvo Enthusiasts Club, which ties in with the 2015 theme of Mods and Rockers.”

For further details on the Carole Nash Bristol Classic MotorCycle Show visit classicbikeshows.com and for information on the The Footman James Great Western Autojumble the address is carsandevents.com

Bookmark our fantastic new website
Written by experts and updated more regularly than any site in biking, morebikes.co.uk is the website motorcycling has been waiting for.
News -

Updated websites for classic bikers
As we’re sure you’ve spotted when browsing our sites, Classic Bikers Club and its sister publications have made a few cosmetic changes. On the whole, it’s all back-end and technical stuff that involves the moving of the sites from one server to another… the IT crowd have all been very excited.
News - 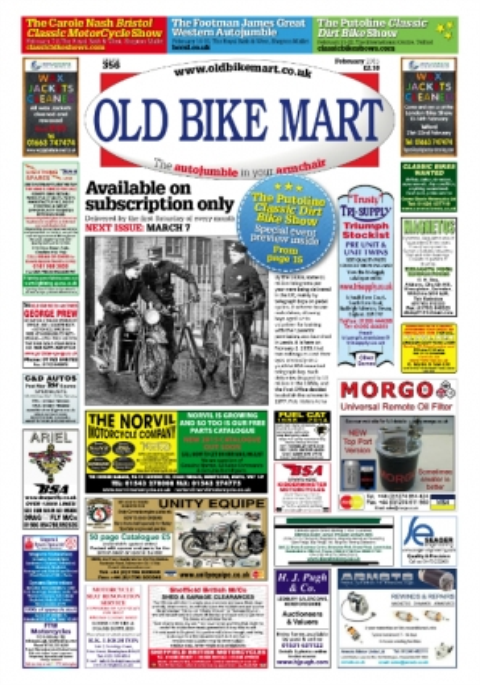 Important update for Old Bike Mart February issue
Due to logistical complications, the mailing of the February issue of Old Bike Mart has been delayed and copies are not expected to be with UK subscribers until at least the scheduled publication date of Saturday, February 7.
News - Web editor