With some sun beating down too – though the ground was decidedly ‘springy’ hinting at what had gone before... – enthusiasts converged on the Leicestershire site, with the ever-popular autojumble first port of call for many.

They were greeted by the usual field full of stalls, with many rare and hard to find parts, as well as complete machines, offered. Founders Day autojumble has a reputation as a being the place to pick up vintage and veteran parts and machines and there were a smattering of motorcycles to tempt – including a veteran (or very early vintage) AJS single, a JAP-powered 250cc OK Supreme ‘racer’, a few Velos (including a Mk.II cammy) and other such delights; many not displaying prices though, probably working on the ‘if you have to ask you can’t afford it’ principle, though the OK had a £8000 ticket on it; it was still there when I left.

The ‘show’ element is given over to clubs, with many in attendance and a good, esoteric mix; the BSA Owners Club rubbed shoulders with the VJMC, with such relative obscurities as the Cammy AJS Register in attendance too (and providing my ‘machine of the day’ a lovely circa 1934 ohc job; it was one of only two machines on the stand, but was glorious) joining in the fun.

Talking of fun and games; as usual the trials boys put on a display in the parade ring, using a variety of pre-65 machinery, while this year’s ‘theme’ was military machines – several riders had come dressed the part, too.

More images and full story in November issue of The Classic MotorCycle, on sale October 5. 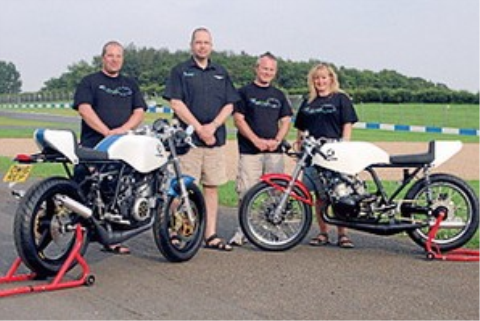 Return of the stroker
The world’s last performance two-stroke is made in England! More proof of the strength of the classic market comes with a newly built, Yamaha OW16 replica from Peregrine Engineering...
News - Steve Rose
The way we were: November 1937
German Ernst Henne (500cc supercharged BMW) set a new motorcycle world speed record of 173.57mph along the Frankfurt Autobahn on November 28, 1937...
News - Richard Rosenthal
CBL image galleries
Our favourite images from the recently released Classic British Legends bookazine have just gone live online, and they include rare images of Barry Sheene, Geoff Duke and others...
News - Web editor
Be like Kenny Roberts
Jeff Elliot is selling his Yamaha TZ750 flat track replica. The bike, featured in Classic Bike Guide and our sister title Classic Motorcycle Mechanics (July 2010 if you want a back issue) has a TZ750 engine in a homebuilt chassis...
News - Steve Rose
Download the Classic Bike Hub app