The way we were: November

1914
The Motor Cycle had just tried the 7hp inlet over side exhaust valve Spacke engine fitted to a Rex frame. Maudes Motor Mart of 113 Great Portland Street, London will handle import of the 996cc V-twin proprietary engine from the USA. Its valve operation is controlled by a single skew gear driven camshaft which unusually runs along one side of the engine. The test included ascents of the 1-in-6 gradient of Swain’s Lane, Hampstead, with the engine fitted in the frame of a second-hand sidecar outfit. The engines are manufactured by the F W Spacke Machine Company of Indianapolis, Indiana.

As the country was now at war there was little or no motorcycle sport to report, however, machines remain in manufacture for the private customer. Motorcycle outfits including the P & M owned by occasional The Motor Cycle contributor Mr H Mortimer-Batten had been used for the past two years for shoots on the vast game estates of Scotland. Outfits are employed by beaters, keepers and the sportsmen to carry luncheon baskets and guns as well as members of the shooting party. And regardless of their success, the keepers ensure no-one returns with an empty sidecar.

1939
After reviewing this month the various tests carried out by the British motorcycle manufacturers the Emergency Committee of the ACU awarded the Maudes Trophy for 1939-40 to the Triumph Engineering Co, for its certified test carried out last February and March. The 1939 Triumph Tiger 100 and Speed Twin employed in the tests were chosen at random by ACU officials from the stock of George Bryant of Biggleswade and Horridge & Wildgoose of Sheffield. The machines covered 1806 road miles apiece at an average speed of 42mph, then the Speed Twin lapped Brooklands at 75.02mph for six hours at Brooklands and the Tiger 100 78.50mph.

1989
The Classic MotorCycle reported the National Motorcycle Museum was about to re-import the 350cc AJS 7R3 on which New Zealander Rod Coleman won the 1954 IoM Junior TT. Developed at AMC by H J (Ike) Hatch, the three-valve works 7R was to go on display with the museum’s collection of competition machines. 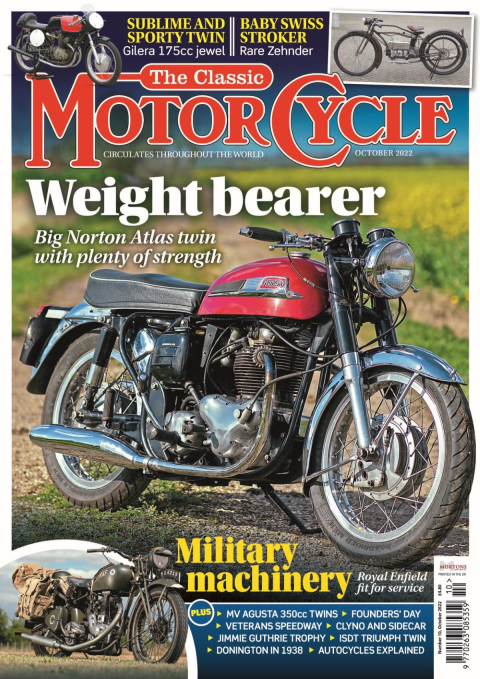