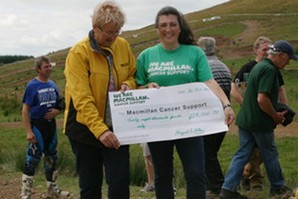 The event took some considerable planning and organising but the huge commitment shown by everyone involved ensured that everything ran smoothly. Indeed the organising committee included some of the most colourful characters in motorcycle sport and their knowledge and experience was invaluable. In addition some wonderful people without whom the event could not have taken place enthusiastically took on the roles of observers and marshals, while others helped with track layout, car parking, gate duties, raffle ticket sales and much more. The list is endless.

Tinto Park Moto is Robbie Allan’s legacy and it certainly proved to be a superb venue which hosted a trial, enduro and scramble with ease whilst at the same time providing ample parking and camping for spectators and competitors alike. The design and layout of the scrambles track made for easy watching and was hugely  enjoyed and appreciated by the riders many of whom are still enthusing about their first ride at Tinto. Equally, in spite of the damp, muddy conditions on the Saturday the trials and enduro riders seemed to really enjoy themselves on what were also carefully planned routes.

On both days the events ran like clockwork just as Robbie would have demanded.

Saturday nights entertainment and auction in the marquee had to be experienced to be believed. So many exceptional items were expertly auctioned and an enthusiastic and generous crowd dug deep and raised a considerable amount of money indeed. It was all good fun.

The success of the whole weekend was down to all the people who attended from world champions to mere mortals who simply love the sport. It was two fantastic days of enthusiasts mingling, spectating, competing and generally sharing their passion for off-road motorcycling.

Everyone who supported this event should be proud that the generosity of the people in our sport resulted in a magnificent total of £28.000 being raised for MacMillan Cancer Support. Robbie would have been impressed. He never did things by half and he would have understood the effort needed to pull together an event of such magnitude. Let’s hope he was looking down on Tinto Park Moto and enjoying the spectacle of what was without doubt a ‘Robbie Allan Event‘.

Special thanks are due to the following companies and individuals who sponsored, donated and worked extremely hard to make the event the huge success it was and of course along with the general public were instrumental in helping achieve the fantastic sum of £28.000 for Robbie’s chosen charity MacMillan Cancer Support.

Apologies to anyone we have missed.

Many thanks from the Allan Family.

More Stories
NMM 30th anniversary celebration weekend
A final reminder for the National Motorcycle Museum's 30th anniversary celebrations this week, kicked off by world champion and BBC TV presenter Steve Parrish. Steve will be appearing live on stage on the evening of Friday, October 31...
News - Web editor
Offham Steam Rally
One day in every year, the village of Offham in Kent becomes 'petrolheads' paradise'...
News - Alan Turner
What we\'ve been wearing
Having for years ridden in predominantly black riding gear, this year TCM editor had a \'switch\' to this new Barbour International suit, in \'sandstone\', which was teamed with a silver version of Davida\'s new Ninety 2 crash helmet and a pair of yellow and black Spada Forty4 Driver gloves...
News - James Robinson
F1 star joins crowd for a bumper Stafford
Thousands of motorcycle enthusiasts left Staffordshire County Showground happy this past weekend as one of the world’s foremost classic events came to its conclusion – and among them was bike-mad four times Formula 1 world champion Sebastian Vettel...
News - Jack Harrison
Download the Classic Bike Hub app