•  AJS Model 18
Fitting a 500 top end to a 350 AMC single was once a common pastime. As were the resulting harsh engines, violent vibes and big bangs. Chris Read explains how to do this kind of conversion properly

• BSA A65 sprint special
When our roving reporter grabbed a snap of this Sprint Special 650 in action, we were intrigued, and asked its owner, Darren Carter, to tell us how it came to be. The story starts two decades ago, when Darren bought the Beesa, almost by accident

• Ducati Mike Hailwood replica
One of the most iconic motorcycles of all time, the MHR. Is it worth too much these days to actually… you know… ride? Nolan Woodbury meets an owner, tells the bike’s tale and finds out for himself

• Excelsior special
One of the vexed questions of our time is how to introduce new blood to old bikes. Odgie reveals a heart-warming story which sees a new rider take to two wheels for the first time, aboard a vintage restoration… 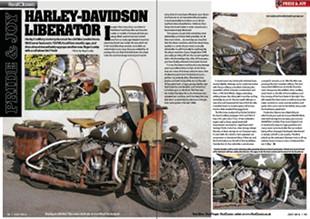 • Harley-Davidson Liberator
Harley’s military motorcycles must be a bit like London buses. We’d never featured a 750 WLA until two months ago, and then almost immediately up pops another one. Roger Loxley tells us all about his WW2 V-twin

• Laverda Alpino
Mention a Laverda 500 twin and most folk immediately think you mean the mainly manic Montjuic. But Ace Tester Miles recommends a much more civilised ride in the shape of its sophisticated sibling. Oddly, it’s blue, and not orange as you might have expected

• Moto Guzzi Lodola
There inevitably comes a point with every project where you have to declare it done and take it for a ride (or else start composing a suitable eBay listing). Stu Thomson has finally reached that moment with his 1950s Moto Guzzi single

• Nimbus rebuild part two
Lasse Horskjær rescued a rare Danish relic from the scrapheap, after it was written off as being uneconomic to repair. This month, he gets to grips with its unusual four-cylinder engine…

PLUS! Jacqueline Bickerstaff has been to Stafford and the BMF Shows AND the VMCC’s Relay Rally; Dave Minton returns to reveal what he thinks is the best British postwar big single, and Frank Westworth has been recommissioning his Norton Commando.

? Buy this copy of RealClassic

More Stories
Norton rallygoers roar into Norfolk
Based at an ideal sports club venue at Hingham, Norfolk, and organised by the NOC’s Norfolk branch, the Norton Owners’ Club’s National Rally from June 20-22 enjoyed warm, sunny weather all weekend and attracted well over 120 members and their machines...
News - Pete Kelly
All-Japanese show at Great Blakeham
If you fancy a good day out this month, why not head towards Ipswich and find your way to Great Blakenham village hall (IP6 0NJ) on July 20 between 10am and 3pm?
News - Pete Kelly
Restored Dot delivery tricycle revealed
No sooner do we mention buying tuppenny cornets from a Dot motorcycle ice cream trike (Stafford Show report, last issue) than Sammy Miller sends us a photo of one that he has just restored to perfection...
News - Pete Kelly
Blindfolded pillion rider Chris raises awareness of sight loss
Riding pillion blindfold may sound like a crazy thing to do, but for Chris Bostock it had a very serious message...
News - Pete Kelly
Download the Classic Bike Hub app