Show manager Nick Mowbray said: “Our aim was to put on a comprehensive show in Scotland that celebrated all that’s best about biking… and we’ve done exactly that.

“The Royal Highland Centre is the perfect location and we couldn’t be happier with the way everything has gone.”

The event featured a host of big motorcycling names, including legendary racer Giacomo Agostini, and Scotland’s own three times TT winner Alex George who proved a popular figure among his native crowd.

Ago, the 15 times world champion and GP race wins record holder, spoke on stage several times throughout the weekend, telling tales of an incredible career that remains unrivalled in terms of its success.

The Italian motorcycling legend took centre stage on Sunday afternoon when he joined the Purple Helmets Stunt display team for their signature stunt – the pyramid. It was another show stopping performance for the 15 times world champion which left the crowds wanting more. 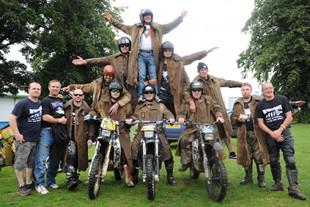 Yamaha, with its Dark Side MT Tour, set up camp for the two days of the event giving unique opportunities for all-comers to test the MT range, try the MT-09 Extreme Wheelie Machine and witness the incredible antics of the Dave Coates Stunt Show.

It was a memorable weekend too for David Stewart, who picked up the inaugural Robbie Allan Memorial Trophy after his 1914 Victoria was named Best in Show.

Along with the impressive variety of bikes on display, the inside halls were packed with traders and dealers offering all manner of deals and bargains on the latest motorcycle gear.

Nick said: “I must mention and thank the many businesses who’ve supported us here at the event by coming along to showcase their wares.

“It’s been fantastic to see so many people heading home with bags full of biking bits.”

Outside facilities proved popular too, with a range of live action events including the madcap Purple Helmets stunt display, Moped Mayhem racing, Scottish Supermoto demos and even a live indie rock band that added a real buzz to proceedings.

Nick added: “There’s been a great blend of long-term bikers, beginners and families who’ve joined us for the weekend and it’s so brilliant to see motorcycling alive and well in this way.”

“I truly hope everyone who attended had a top, top weekend.”

More Stories
Bike Fest
As ever, the annual Bike Fest can be relied on to turn up a wonderful variety of machinery. The wide range of bikes in the sprint event attracted a good number of vintage entries, as well as those tackling the quarter mile on a 'run what ya brung' basis...
News - Alan Turner
Team Obsolete set to mark 1984 Historic TT success
Dave Roper, the first American to win a TT, is returning to the Isle of Man this year to mark the 30th anniversary of his success in the 1984 Historic TT Race...
News - Web editor
KICKBACK Custom motorcycle show
Over 200 custom motorcycles will be on display at KICKBACK: The (4th National) Custom Motorcycle Show, held at Donington Park in Derbyshire over the weekend of September 20-21...
News - Web editor
Founders Day event at Lutterworth
Renowned for its friendly, welcoming atmosphere and outstanding exhibitions of veteran, vintage and classic motorcycles, the huge Founders Day event organised by the Taverners section of the Vintage Motor Cycle Club at Stanford Hall, near Lutterworth, Leics, on Sunday, July 20, more than lived up to its reputation...
News - Pete Kelly
Download the Classic Bike Hub app