With the serious business dealt with in the afternoon, the evening was given over to the Awards evening and a chance to socialise. With a large number of trophies to dispense, it looked as if it could be a long night, but a small number of obviously talented riders cleared a lot of the silverware.

After an impressive list of Vintage class wins was read out, it was followed by the name of John Young. For some years, John has competed with a pair of vintage Triumphs where dope-burning JAP engines have been substituted for the original power-plants, an early 500 and a post-war 350 provided a busy season and John returned to his seat loaded with an arm-stretching quantity of cups and plaques.

Another multiple-recipient was Jasper Joy, who has been getting quicker and quicker on a Triumph Trident. He is also consistent and these qualities helped him annex the ‘Unlimited non-Japanese’ class as well as success in the tougher fight for the overall Southern Section Championship.

More Stories
The way we were: August 1938
The motorcycling world was left reeling following the death of Eric Fernihough (shown) who died in hospital from injuries sustained on April 23 while attempting to establish a new outright world record on the Gyon Road, near Budapest, Hungary...
News - Richard Rosenthal 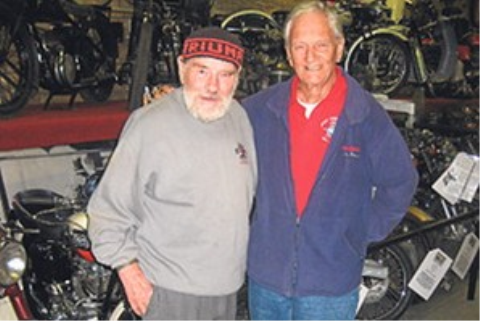 Capital idea as museum builds on success
Opening for an extra day during the 2012 Olympics paid such dividends that the London Motorcycle Museum has now decided to make it a permanent arrangement...
News - Tim Britton
John McGuinness confirms entry for Lightweight TT race
Nineteen-time TT race winner John McGuinness has confirmed that he will race in this year’s Lightweight TT onboard Honda’s all new CBR500R. The race is scheduled to take place ahead of this year's PokerStars Senior TT, on Friday June 7...
News -
Mallory Park crunch meeting cancelled – court date set
A date has been set for a court hearing that could determine the future of one of Britain’s most historic and well loved race circuits, Classic Bikers Club has learned...
News - Dan Sharp
Download the Classic Bike Hub app