The parade, a tribute to twenty-six time TT Race winner Joey Dunlop, takes place on the Isle of Man on Saturday August 23 as part of the Island's Classic TT Races.

The Ballymoney man, who won four TT Races this year riding BMW's including the historic PokerStars Senior TT Race seventy five years after George Meier's victory, will represent his late father Robert in a tribute lap that has been created to recognise some of his Uncle Joey's greatest rivals across his road and circuit racing career.

The bike, the brainchild of ex-Norton employee Brian Crighton, is currently on display at the National Motorcycle Museum. Crighton has overhauled the bike, which hasn't run for many years, in preparation for its return to the Isle of Man Mountain Course. As well as participating in Saturday's parade, the bike will also be on display in the race paddock behind the grandstand during the Classic TT Race meeting.

The first Rotary racer was the red, silver and blue RC588 with an air-cooled twin-rotor engine. Simon Buckmaster and Trevor Nation raced a scaled up version in 1988 to great success in the British Formula One Championship. The John Player Special sponsorship in 1989, which saw Steve Spray scoop the F1 Championship that year, evoked Player Norton days of the Seventies and saw the new liquid-cooled RCW588 in its iconic black, grey and gold livery.

The machine Michael will ride will be the same machine his father rode in 1990, notching a Norton double in the North West 200 and also finishing third in the F1 TT of that year. Michael will complete the tribute to his father by wearing specially created replica leathers and helmet.

The bike will also appear at the VMCC's Festival Of Jurby on the Isle of Man on Sunday August 24.

More Stories
Wells charity event
Wells marketplace was the starting point for the fourth Tortoise and Hare Run organised by Wells Classic Motorcycle Club to raise funds for the Dorset and Somerset Air Ambulance on Sunday, June 8...
News - Peter Kelly
TCM studio day
The Classic MotorCycle magazine will be hosting a studio day within the next few months, where the mag's readers will be invited to bring their machines over to the TCM headquarters for a photographic session...
News - James Robinson
Win a Honda CRF450R at the International Dirt Bike show!
Europe’s largest dedicated off-road event – the International Dirt Bike Show – is set to open at Stoneleigh Park NAC on October 30 for four fabulous days of off-road indulgence. Read all about it and how you could win a Honda off-road bike worth nearly £8000!
News - Tim Britton 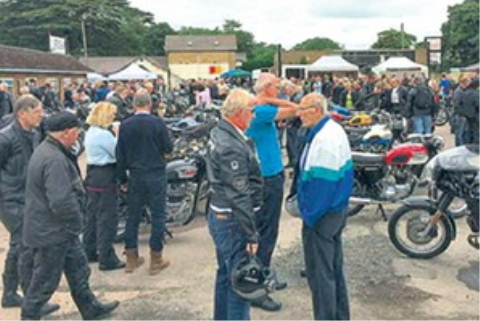