Metzeler took the opportunity at the International INTERMOT Show in Cologne to unveil its new SPORTEC Klassik tyre. Aimed at the popular classic bikes from the 70s onwards where performance tyres for street and touring machines are often overlooked by tyre companies, the company claims the new tyre offers significant improvements in all areas.

Advanced compound and a bias belted construction allow more freedom with the tyre tread pattern, too, offering a bigger and more stable footprint at all angles and more uniform wear patterns.

The newcomer will be filtering through from Spring 2015 in the following sizes. 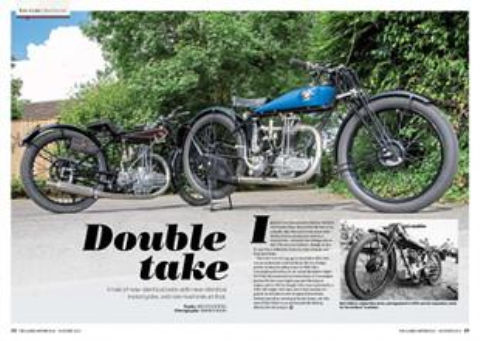 The Classic MotorCycle on sale - November 2014
Twelve page Matchless G50CSR feature, all the glitz and glamour from Goodwood, Triumph CTT, New Imperial restoration, BSA A10 Golden Flash, sporting 1920s singles and all the usual archive material, plus your favourite columnists. On sale now...
News - Web editor
Sunbeam September Challenge a success
This year’s Sunbeam September Challenge in Yorkshire proved to be a tremendous success. The event was graced with a wide variety of attractive and interesting old motorcycles, and also with some good, clear weather...
News - James Robinson
Gentleman’s spirit of adventure night
Suffolk-based custom motorcycle emporium Krazy Horse is joining up with Ravenwood Children’s Charity Trust and premier menswear brand Trotter & Deane to stage an evening of adventure for gentlemen based around ‘the need for speed, style and adventure’...
News - James Robinson
Musician donates motorcycles for auction
Graham Coxon, British musician and lead guitarist for Blur, is donating seven of his prized motorcycles for sale through Bonhams auctioneers, with proceeds to benefit the UK’s leading children’s charity, the NSPCC...
News - Web editor
Download the Classic Bike Hub app