Rob Barber, on the Ohio State University Buckeye machine, took third. With dry conditions all round the course, despite dark clouds looming overhead, McGuinness, number one on the road, swept through Glen Helen 4.9s clear of Anstey with Robert Wilson over a minute adrift in third. His advantage over Barber was only slight though at just 7.5s. University teams Paul Owen (Brunel Racing) and George Spence (Kingston University) were early reported retirements.

Through Ballaugh McGuinness had almost doubled his lead and went through the Sulby speed trap at 154.3mph with four seconds now the difference between Wilson and Barber in third and fourth although it was the latter who held the final podium position.

McGuinness was clearly in control, increasing his lead at every timing point, and by Ramsey Hairpin it was up to 11.8s and unless Anstey was operating a different strategy and planning on a quicker run up and down the Mountain, the win was seemingly his. Barber was still in third now some 2m45s behind.

McGuinness added another seven seconds to his lead at the Bungalow and as he swept along Glencrutchery road, he completed the lap at a brilliant 117.366mph (19:17.300), the first official lap under 20 minutes for an electric bike around the mountain course, shattering Michael Rutter's lap record of 20:38.461 (109.675mph) set in last year's race by over a minute.

When Anstey, who had started 30 seconds later, crossed the line, the official gap was 23.3s with the Kiwi also well inside the old lap record with a speed of 115.048mph.

The battle for third went all the way to the end and it was Barber, the 2009 race winner, who prevailed by the tiny margin of 0.370s with Wilson obviously disappointed to have missed out. Mark Miller was the only other finisher in fifth with Russ Mountford (Arc-EV3/ARC EV Engineering) and Timothee Monot also being forced to retire.

• Statement issued on behalf of ACU Events Ltd: Karl Harris
ACU Events Ltd regrets to announce that Karl Harris, 34, from Sheffield was killed during the Superstock Race at the Isle of Man TT races today following an incident at Joey's on the 2nd lap of the race.

Harris, a professional Motorbike racer, made his TT Races debut in 2012.  He was a triple British Supersport Champion and British Superbike podium finisher.

Harris appeared on the racing scene as a teenager in the 1990s, when he rode for Team Great Britain in the Superteen Championship. From there, Harris went on to win the 1999 European Superstock 1000cc Championship before spending a season in the World Supersport Championship.

He was best known for his British Championship career. He was the dominant force in the British Supersport Championship in the early 2000s before becoming a prominent front-runner in the Superbike class for the factory Suzuki, Honda and Yamaha teams.

Harris won three British Supersport Championships between 2001 and 2004, the first for Crescent Suzuki and the remaining two for Honda Racing, before progressing full time to the premier Superbike category in 2005. His best season came in 2006 when he finished in 5th place overall recording 6 podiums. In total, Harris notched up 12 BSB podiums.

The ACU wishes to pass on their deepest sympathy to Karl's family and friends.

Gary Thompson, TT Clerk of the Course, ACU Events, said: "Karl was one of the great characters in the race paddock. His infectious enthusiasm and sense of humour lit up many race meetings. He was a hugely talented racer and will be sorely missed."

The Coroner of Inquests has been informed and an investigation into the circumstances of the accident is underway.

More Stories
The Classic MotorCycle on sale - July 2014
Win a Vincent for just £2! Amazing Moto Major, Norton Jubilee profile, Italian motocross museum visit, stars of Stafford, plus all the usual archive stories and your favourite columnists. At a bookstall near you now!
News - Web editor 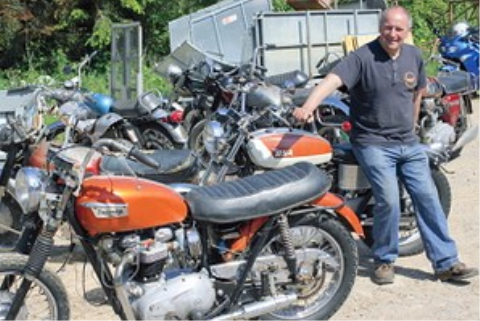 British bikes are back from USA
More than 40 British bikes, including a Dunstall Norton Commando, a Triumph-engined flat-tracker and a fire-damaged BSA Rocket 3, recently arrived in the UK having being sourced from the east coast of the USA by Phil Humphrey and Alan Millar of Totnes Classic Motorcycles...
News - Pete Kelly 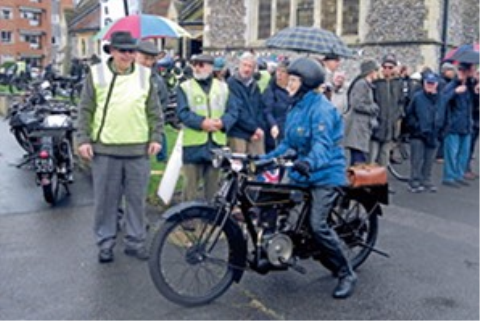 Ixion Cavalcade
This year’s run on May 11 started wet, cold and windy, but soon after the riders departed on the Cavalcade the rain stopped. Once into the country lanes, participants were protected by the foliage and could happily concentrate on the potholes…
News - James Robinson
RealClassic 122 out now!
An eclectic collection of classic motorcycles awaits your reading pleasure in this month\'s RealClassic magazine, including an Ariel Square, two-strokes from Greeves, Suzuki and Kawasaki, Enfield\'s Meteor Minor, a much-modded Vincent Comet and heaps more. Here\'s how to buy a copy
News - Web editor
Download the Classic Bike Hub app