Brough and Vincent at Duxford auction

The 1932 Brough Superior BS4 offered is one of only ten machines of the type built by the factory in 1932. Powered by a four cylinder Austin Seven engine and gearbox, they were characterised by the distinctive twin rear wheel layout. Only seven examples of the breed are known to survive of which only three, including the lovely example offered, are thought to be running.

Sitting proudly alongside the Brough Superior is the first example of the quickest model to emerge from the former marques spiritual successor in Stevenage, Vincent. 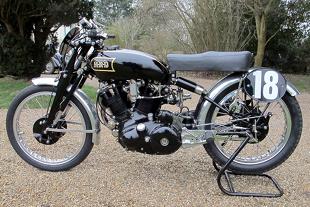 The Black Lightning, developed from the road going Vincent Black Shadow, was designed as an outright competition machine with examples reigning supreme in the 'unlimited capacity' class of road racing long after the factory had closed. The machine offered was the first Black Lightning built and was despatched from the factory on January 17 1949 to Buenos Aires, Argentina, where it remained until it was repatriated in the early 1990s and restored over a seven year period by the vendor.

Another well-travelled British product is the immaculate 1948 Norton International 500 that is thought to have spent some of its life in Australia before returning home and being restored. Other notable entries include nine post-war Triumphs from a private collection including three 650cc TR6 Trophies and an early pivoted fork Tiger 110 equipped with 'Roadmaster' panniers and a 1922 Rudge Multi IoM Replica.

More Stories
Red Marley cancelled
Sadly, after a course inspection on yesterday, the Red Marley Hill Climb Club have reluctantly cancelled the popular Easter Monday spectacular in Worcestershire...
News - Tim Britton
South of England Show
Elk Promotions held its first event of the year with the RealClassic Show at the South of England Showground in Sussex. A bitterly cold wind, and a forecast predicting snow later, may have slightly dented the entry, but in the long tradition of Elk events, many bikes were ridden to the show and there was plenty to see...
News - Alan Turner
CMM: news in brief
Hire a classic bike at Isle of Man this year, news of the annual Classic Speed Week and free bike slots on Motorail...
News - Bertie Simmonds