Premier 1908-1915/1933 UK, Germany and Czechoslovakia
As Hillman, Herbert and Cooper, the forebears of Premier had been involved in the formative years of the cycle as opposed to the ‘Ordinary’ (Penny-Farthing). Their early offering, a front wheel drive high wheeler wasn’t that successful, but significantly it was given the name Kangaroo. Circa 1891 the firm became the Premier Cycle Company Ltd and fortunately enjoyed success with more conventional safety cycles, again proudly wearing the Kangaroo logo, comprising the animal holding a crown in its forepaws.

As cycle makers Premier’s business boomed but, unlike rivals, they weren’t immediately drawn into the new craze of motorcycling. In fact they played a rather long wait-and-see game and even when they finally took the plunge by announcing their intention at the November 1908 Crystal Palace Show, they weren’t that ready! However, early trials success ensured the predominantly White and Poppe-engined machines from Coventry became well known. A year later they unveiled their own V-twin engine installed in a Premier rolling chassis. Soon the Premier Cycle Company found themselves embroiled in a bitter legal battle with the car makers Premier Motor Company from Birmingham, who objected to these ‘upstarts’ from Coventry with their Kangaroo logo. The cycle and motorcycle firm won the dispute, with the car concern calling their vehicles PMC from then on. 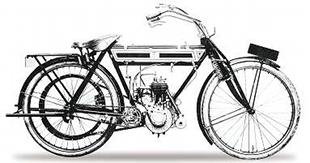 By early 1910 the works were in full swing, building their own 499cc side-valve single cylinder engine with second exhaust outlet sited in the barrel wall. Their own leading link type forks were introduced, although these were soon replaced by bought in Druids and in 1911, a lightweight motorcycle with Premier’s own 246cc side-valve engine was launched.

Despite their long-winded company name, Premier was controlled by the Rotherham family who were keen to become a major player in motorcycling. In addition to strong marketing and a rapidly established dealer network, Premier opened a second motorcycle factory at Nuremberg in 1910, managed by racing motorcyclist Basil Jones, who later married into the Rotherham family.

Keen to promote their models through sport, Premier entered the IoM TTs from 1909-14, with more retirements than finishes and a best of seventh in the 1909 race on the St John’s course. Long distance trials proved more successful, with gold medals in the UK and as far afield as New Zealand.

A new 548cc inlet-over-exhaust-valve 90 degree V-twin was unveiled in 1912, joining the existing 499cc models, which included single-speed racers and three-speed ladies’ models, and the 246cc lightweight, to make up the range. 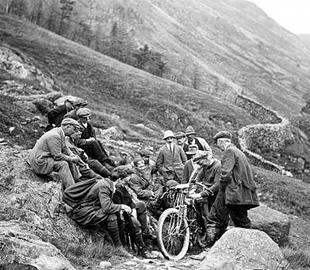 In Nuremberg, production was under way with a claimed 346cc sv single (from pictures this model looks like a British 246cc machine) as well as the limited import of Coventry-built larger models. Due to poor trading conditions, the German works, which although run by Basil Jones for Premier of Coventry was actually owned by the German machine factory JC Braun, moved to Eger in the Austro-Hungarian Empire (later Czechoslavakia).

At Coventry, an all out effort was made to win the 1914 TT with a new long stroke (79.5 x 100mm) 499cc single bristling with novel features. Despite a team of three leading riders, headed by 1912 Junior victor Harry Bashall, the Island outing was another disaster. Back to roadsters, Premier launched more models including a 998cc V-twin – basically a doubled-up 499cc single – and their own separate gearbox, to replace earlier hub gears.

New designer GWA Brown developed a 322cc in-line twin cylinder two-stroke called the Pony. Its conrods bolted directly to the pistons while the other end of the con-rod was ‘T’ shaped and located on crankshaft throw cross-heads. The frame incorporated the fuel tank and planned finish was brown enamel, with no nickel plate. Onset of war ended this project, leaving the UK factory to make just 300 499cc singles for the Russian and Allied military, before ending motorcycle manufacture.

After the war, Premier launched a three-wheeled car which was underdeveloped. Extensive remedial work and redesign bankrupted Coventry Premier. The Singer car company took over the Read Street works, completed the outstanding three-wheelers and turned the premises into a body shop for Singer cars.

Although the German factory had built machines in the vein of Coventry models, once established in Eger, production took on a more and more continental appearance, despite the business being managed by Geoffrey Rotherham, a member of the wealthy family who owned the original Coventry factory. Much of the design work was by Hans Baumann, although Otto Lausmann was responsible for some later engine design.

At one time, Premier was Czechoslovakia’s largest motorcycle factory. A 269cc two-stroke, looking not unlike a baby Triumph, was built for 10 years and JAP engines were used for many models until 1927, when Premier introduced their own 750cc V-twins and 498cc ohv singles. However, their successful race shop continued to rely on JAP power. Czech manufacture of motorcycles, which bizarrely had English names, ended in 1933.

Despite only a six year UK production run, Premiers were built in large numbers for the perio 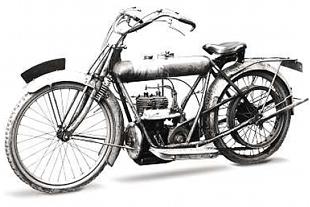 d and enjoy a good survival rate of both 499cc and 246cc singles. A moderate number of vintage and post vintage Czech built models survive too.

Prester merged with Jonghi from La Courneuve in 1936 leading to a revised model range including 175-350cc dohc racers, designed and developed by Remondini. AfterWWII the range centred around lightweight models, including 98-250cc two-strokes, a 125cc ohv model and a 125cc scooter.

Presto 1901-40 Germany
Chemnitz cycle maker, who started building small numbers of motorcycles using FN, Minerva and Zedel engines. Began making cars too in 1909, using bought in engines including French Delahaye, then developed their own. After WWI production, when there was time to build motorcycles, focused on 197cc side-valve Alba powered lightweights.

In 1926, bought German Dux car works and a year later became part of the NAG group. During this period, motorcycle manufacture volume was variable. In 1935 the Chemnitz factory was sold to Auto-Union. Through the Thirties Presto made few motorcycles, but continued with a moderate output of Sachs two-stroke engined 98cc autocycle-like machines which continued until WWII.

Prinetti and Stucchi 1898-1911 Italy
Doubtful if there are any motorcycle survivors from this Italian firm which was a pioneer motorcycle, tricycle and car maker. Chief designer was Carlo Leidi, though the great Ettore Bugatti worked for Prinetti and Stucchi as a young man, going on to De Deitrich, Mathis and Deutz before beginning his own car marque in 1909. 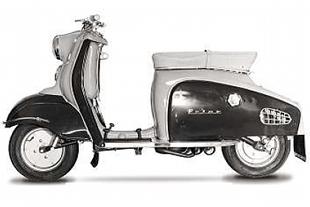 An export name used in the UK and other markets for the Hercules scooter – which in turn was based on the TWN Contessa – to avoid confusion and legal conflict with the British Hercules cycle factory. Not that smart a marketing ploy, as it shared bodywork with the TWN Scooter, which was also marketed in the UK. These were sold in Germany as the TWN Triumph, but just the TWN in Britain – bet that confused potential Prior customers in the late Fifties and still leaves me head scratching now... Prior import and assembly was handled in the UK by BP Scooters, Wolverhampton.

Progress 1951-60 Germany
Four companies traded under the Progress label in Germany or the UK. The first, a German firm, built singles and V-twins from 1901-14 using Fafnir, Zedel and other proprietary engines. Another firm in the UK made Antoine, Minerva and MMC engined machines between 1902-08, while the final two, later companies – one each in Germany and the UK – were associated by business.

The Stuttgart scooter maker Progress was established in 1953; production beginning with 147cc and 174cc Sachs engined models named the Strolch (Vagabond). Uniquely, the headlamp was mounted on bodywork above the front mudguard, rotating as the steering moved and 16inch wheels were fitted, a feature which improved hill climbing, claimed the makers. In 1955 a new scooter, the Progress 200 with a more conventional headlight and a 191cc Sachs two-stroke, single joined the range, followed later by a 98cc Sachs-engined Strolch. From 1958 to the end of production, the novel mudguard-mounted pivoting headlight was dropped. 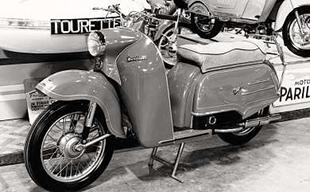 Although the German scooter was marketed in the UK by the Progress Supreme Company, later associates Carr Bros Ltd, Purley, Surrey began assembling German Progress scooters, some with British-made glass fibre bodywork, under licence in 1956. Three models went into production with Villiers engines replacing the German Sachs units – the 148cc Anglian and 197cc Briton with kick starters, plus the electric-start 197cc Britannia.

Although hardly pretty, the Progress was well made and with good spares availability for both Sachs and Villiers engines is a practical, different classic scooter. 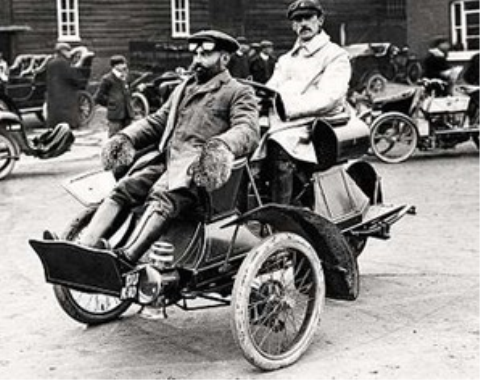 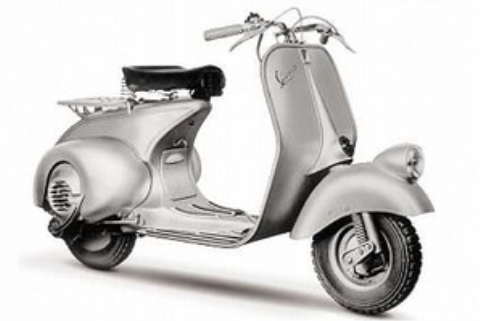