Fun in the sun Winter!

Neville Cushing, friend, mentor and creator of interesting vehicles, has a fondness for Norton’s mainstay-single, the ES2. He has two; a swingarm 1956 model that is standard apart from the exhaust from a speedway bike, upswept ‘cowhorn’ handlebars from when it was hauling a sidecar and a rather rudimentary, yet effective centre stand spring. 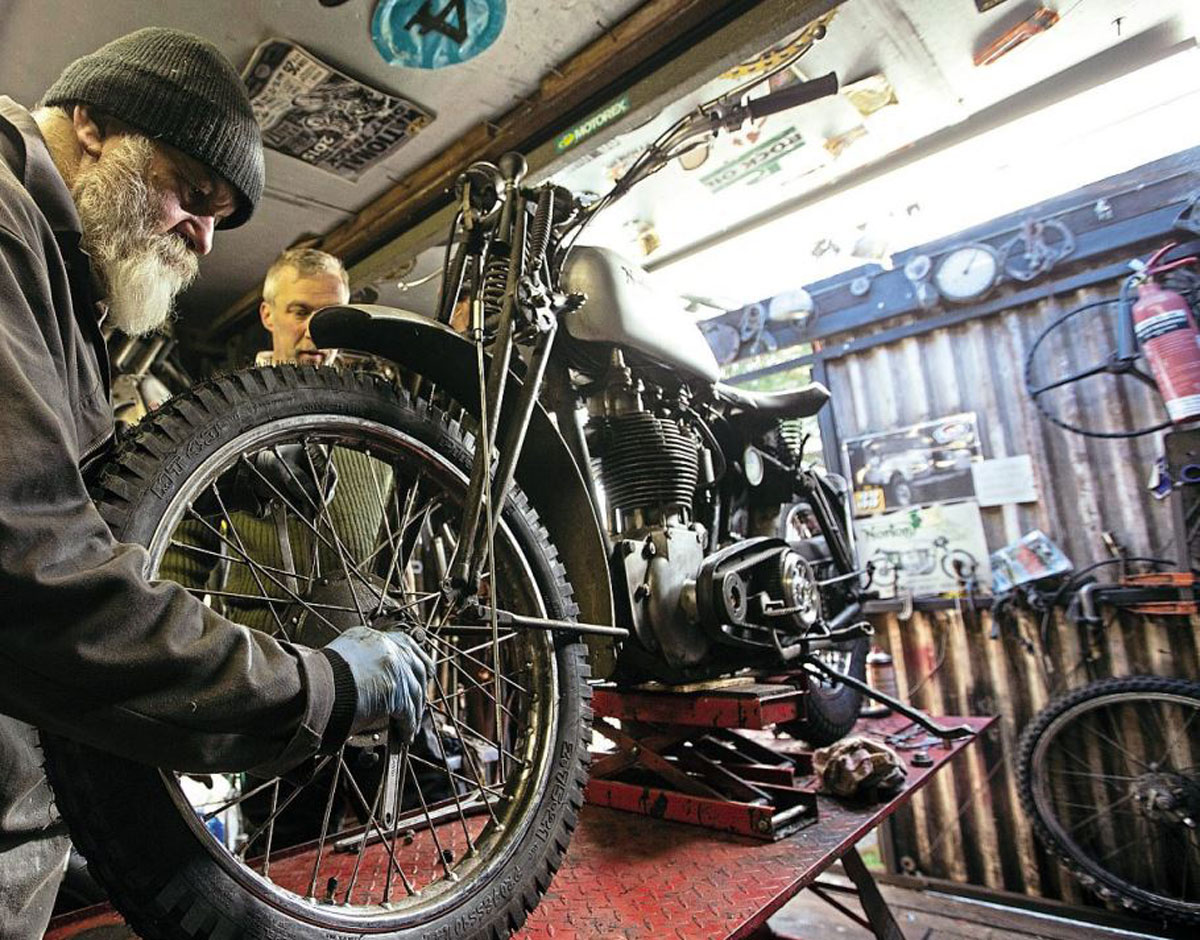 The second bike, also a 1956, started life as a plunger-frame that Nev got with other spares when he bought the other one, which he took back to hardtail, fitted Ariel girder forks, a stationary engine magneto, alloy mudguards, a modified Japanese fuel tank modified to look a little like the 500T tank, Dunlop saddle and a somewhat diminutive exhaust silencer, which surprisingly works well. The engine plates hold a motor from another deal and are water-jet cut from titanium sheet, helping this feel rather lightweight and confidence-inspiring. 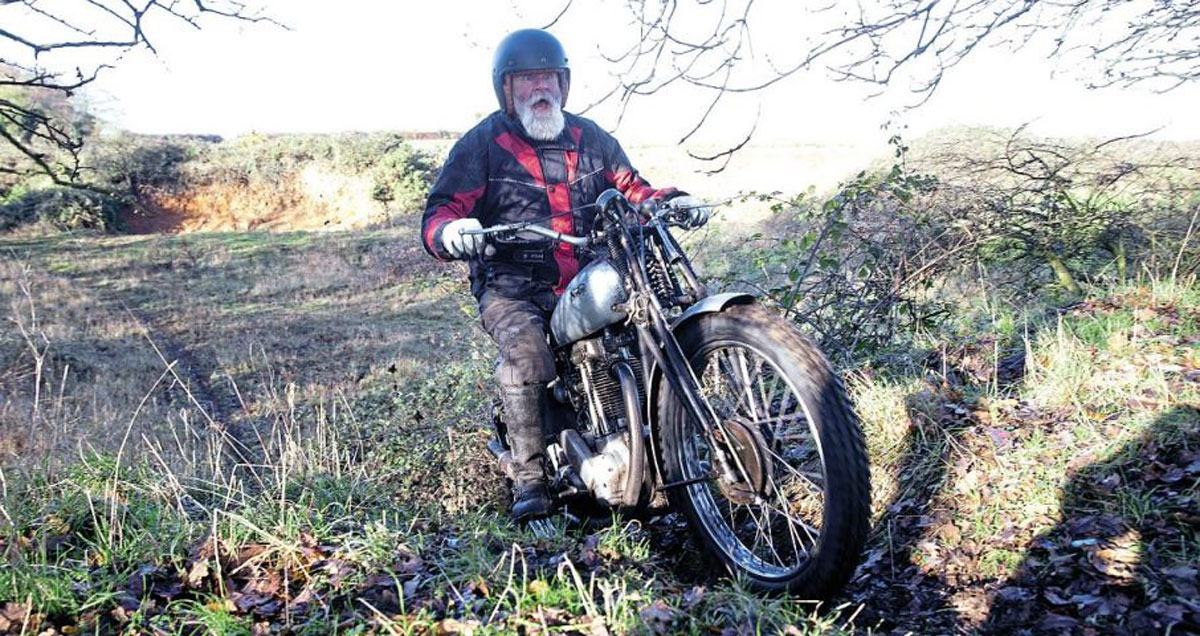 Nev likes to use his bikes; if it’s not icy, you can ride. And as Norfolk ‘roads’ (tracks) are usually covered in – er – mud, let’s call it, there’s little point in having a fleet of beautifully shining machines, as you’d never ride them. These machines are cleaned with WD40 and a rag, not soap and a sponge, and in our eyes, they look all the better for it, but each to their own.

Our day starts cold, but sunny. A new set of Pirelli trials tyres are being fitted to the off-road bike, but neither have been started for a few months, as other bikes have been in favour. In fact, I notice the road bike has precious little fuel and the advance/retard cable has broken. “That’ll be alright boy. Just kick it,” shouts Neville. After a quick tickle, it starts first kick, smoke filling the garden. “Keep it runnin’, it’ll have dry sumped. Get it all back in the tank,” I was told. Neville rides a lot and doesn’t believe in oil taps. “You’ve only got to forget it once,” he says. Yet others swear by it – whatever works for you.

A lesson in history – are you sitting comfortably?

Considering the ES2 was in production for just under 40 years, there are still several facts around the model that cannot be clarified. For example, which came first, the CS1 or the ES2? Also the name. Some say it stands for ‘easy start’ as with a good magneto an ES2 should start first kick. Others say it was named after Ernie Searle, engine tuner and TT racer of that first prototype in 1927, coming 17th that year.

However, it is the founder of the VMCC, Titch Allen, who says that Walter Moore, designer of the ES2 and CS1, believed it was simply manufacturing code. ‘E’ was for extra cost from the costing department, ‘S’ stood for sports and the ‘2’ meant it was the second model in the sports line up, after the Model 18. Titch thinks this is the most sensible answer, as it was similar to the JE model; ‘J’ for Junior and ‘E’ for extra cost. But the truth may never be known. 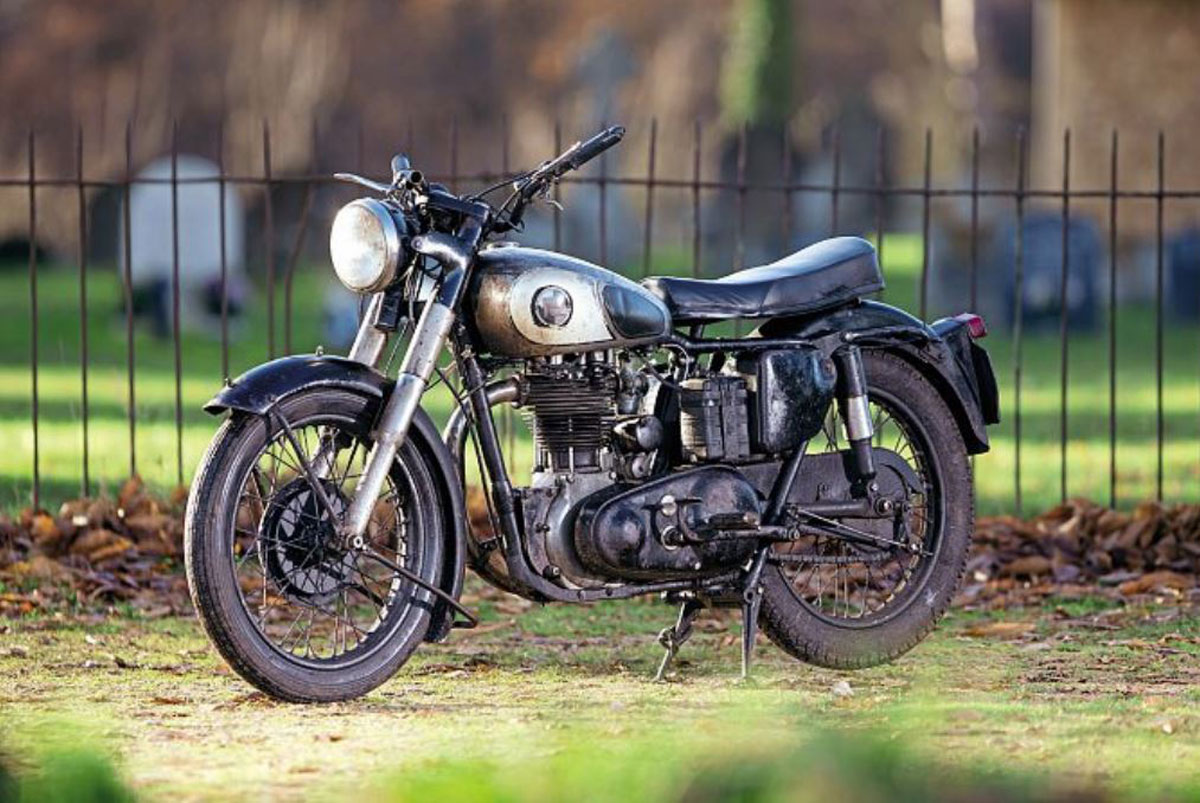 Wherever its name derives, the infamous 79mmx100mm long-stroke engine is simple, relatively strong and, if looked after, reliable. It also shares many parts with the smaller Model 50 and larger Model 19. And it’s been in production since 1927, with the prototype raced (or should that be tested) at that year’s TT by Searle. Many say the bottom end was created from the Model 18, but it is more likely it was based on the CS1 overhead camshaft engine, designed around the same time. While the overhead valve engine has changed little over time, the earlier bikes had exposed valve gear and the mag drive from the left side, like the CS1 engine. It consequently changed to the right, the valves became enclosed to keep one’s slacks clean, but as a whole, they are easy to get parts for from the likes of Norvil, though they are not as well supported as the twins.

Gearboxes changed over time, frames went from rigid, to plunger, to swingarm, to featherbed and then slimline featherbed, and lastly, thanks to the mess the industry was in and the buying public’s wants, the ES2 became a badge-engineered Matchless, still a good bike, but the ES2 and that long-stroke engine had gone. 1962 was technically the end, though many bikes took up camp in dealerships, unwanted, so there will be those registered later.

With the sight of fuel gushing out of the tickler. No amount of tapping the float bowl would stop it, so it was off with the bowl (simple on an ES2 – just loosen the clamp and twist the carb round so you can get to the screws) and sure enough the float was full. A quick rummage discovered a spare float and all was good.

The off-roader wouldn’t kick over though, so new petrol was poured in, the plug warmed with a blow torch and some brake cleaner went in the carb. Boom! Up she started, and after checking the oil was returning to the tank, we were ready to go.

Norfolk is covered in wonderful, single-track back lanes that are perfect for old bikes. We track here and there on familiar routes and, because of the nature of these wandering byways, our speed never gets so high that we get too cold. The bikes have different gearing, but are happy at any speed and that pull of the big single allows effortless riding on these often tight and twisty lanes. My ignition adjuster has a snapped cable, so it’s running full advance, so the power is instant and there aren’t the steep hills on which you’d need to retard. The brakes aren’t brilliant, but when the surface is slippery, they’re better than modern stoppers, which are too harsh. I’m finding the road bike really quite comfortable, thanks to the swingarm and standard seat, while Nev is happy bouncing around on his compliant tyres and saddle. When he’s not buggering around through old pits…

When we find them, we start to head down some BOATS, or Byways Open to All Traffic, which are unmade, or unmaintained lanes. Neville, with his lightweight off-road tyred bike, is fine, while I’m slipping around. But while he’s trying to soak me in the puddles, I’m still smiling. This is fun! 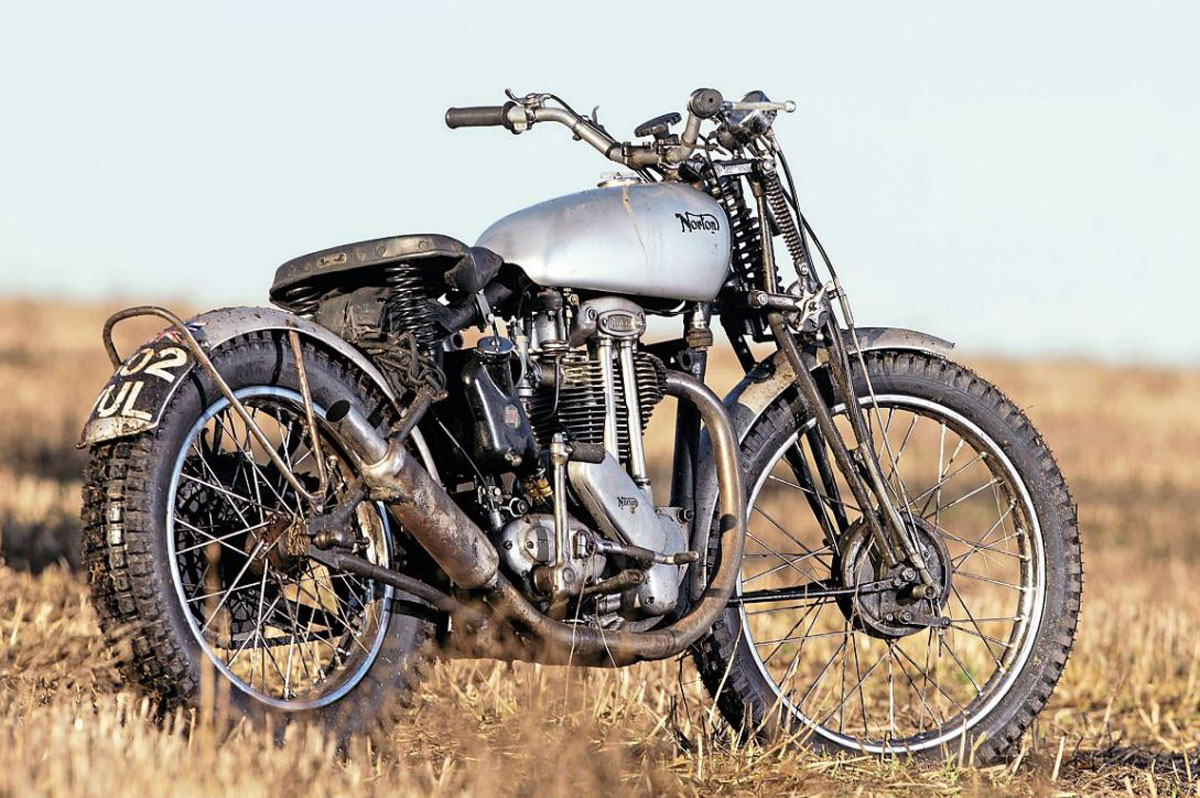 The local ford is flowing. Undeterred, Nev flies through, while I stop, wondering how waterproof the electrics are. In the end I go over the footbridge, while he’s enjoying having some photos taken of his river crossing. Watching, I can’t get over how the permanently low winter sun is lighting us so beautifully through the leafless trees. This is work, yes?

The bikes sound glorious together. Neither have original exhausts and both are loud, but that thump-thump that only a long-stroke single can give is a soundtrack that is perfect for this kind of riding. If we were on modern off-road bikes with gory-bright clothing and StarWars helmets, we’d be public enemy number one. But two old boys with open face lids arealot less intimidating. And we’re on Nortons. Horse-riders, walkers and children smile and wave, and if we can, we wave, smile or honk back.

We stop at a local café for warm coffee and naughty-but-nice cakes (Corners nursery and farm shop, Beetley). It’s also a curiosity shop-cum nursery, so we wander around looking at the tractor seats, sack barrows and ploughing paraphernalia. The owners are friendly and come over to admire the bikes, while we laugh about various tales of slipping, sliding and other daring-do.

Winter does have its issues, like the fact that by 3pm it’s time to head back. And the off-roader has no lights, so it’s back roads back, too. A quick rinse down, a spray of protection and the brace of ES2s are packed away, waiting for when we both have time to do the whole thing all over again. That’s a benefit of having real bikes, in real condition. The coast next time, or is that too organised?

I totally understand if your pride and joy is packed away for the cold months, but you are missing out on some great riding days. And the ES2 may have spent most of its life as a mundane cooking model, but it’s a superb tool for these kinds of shenanigans and one that could also cruise at 60mph all day, should you wish.

I’m sure that the new Nortons will be great and I am looking forward to trying them. But would we have been smiling as much after a day on them in December? I doubt it. 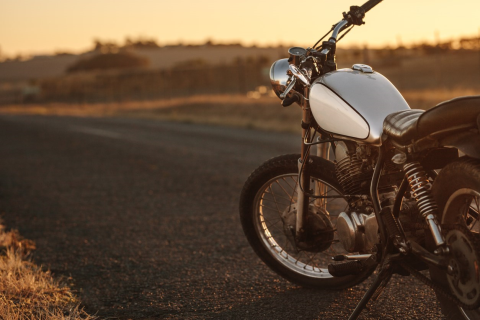 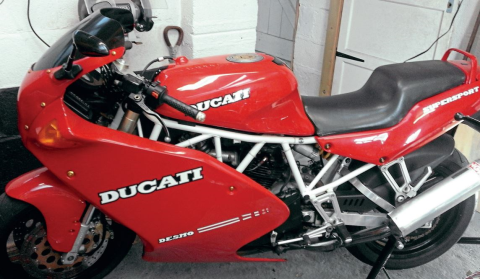 Refreshing a Ducati 750SS
Reader, David, most kindly sent in his observations when working on a Ducati 750SS he bought. Much is said about Ducatis, but it’s often forgotten they are nice bikes to work on.
Features - Classic Bike Hub 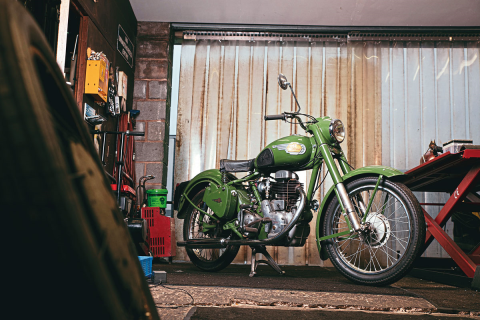 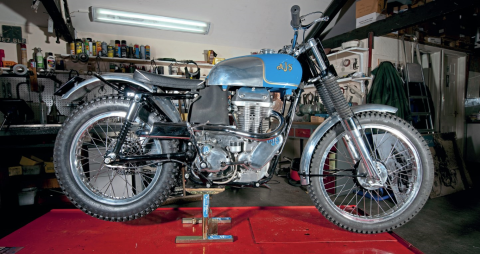