Someone once said: “when the green flag drops the boasting stops,” and this month we’re reviewing a machine that unarguably eradicates 99.99% of all known BS.

In terms of mid-1970s middleweights Yamaha’s RD400 was, in the eyes of contemporary road testers, top dog in terms performance, handling, usability and value for money. In the opinion of most owners it was also the best looking bike out there by a country mile. If that’s alienated anyone, we humbly apologise but facts are facts.

?In terms of power per litre or kilo the apparently humble and simple Yamaha twin aced its peers by a small but critical amount. On the road the relatively slim and lithe RD400 lacked the bulk of Suzuki’s GT380, had no need for the overt complications of Honda’s CB400 with its extra pots and cams and espoused the supposed need for third pot a la Kawasaki’s KH400. Of course the tangible differences in day-to-day riding were really much less but somehow Yamaha’s then largest two-stroke twin to date was greater than the sum of its parts. 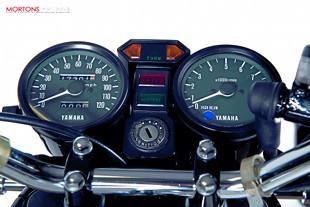 Just like its peers the RD400 had a long family lineage and in fact it has the longest traceable ancestry of the group. The fundamental structural design was laid down in 1967 with the 350cc YR1, the first Yamaha stroker twin with horizontally split crankcases. The subsequent R2/R3 were simply minor upgrades on the same theme but the 1970 YR5 refined the basic 350 engine architecture and this format went on right the way through to the end of the air-cooled 400s and on to the later water-cooled 350s. The YR5 ran a 64 x 54mm bore/stroke set up that distanced it from the previous almost square iterations and the result of this fundamental change was to produce a more rev hungry machine. The same set up was perpetuated, allied to reed valves, through the 73-75 before Yamaha upped the ante with the RD400. Recognising the 350 had been developed almost to its limits Yamaha revised the crankcases, lamped in some new engine internals and once again brought the bore/stroke ratio back to almost square. The result was probably the best middleweight air-cooled stroker ever made.

?Allied to a chassis supposedly based on race machines the RD400 offered just about the best weight/power/price/handling combination there was in the day. The earlier RD350s had rightly established themselves as giant killers and the 400s simply built on that well-deserved reputation. In reality the RD400 was little more than a stop gap model while Yamaha devoted serious R&D to the next generation of giant killers. The legendary LC350 and the sublime YPVS were quantum changes on from the air-cooled bikes that had made the company’s reputation but the 400 had and retains a certain almost indefinable cachet about it. It’s somehow a substantial leap on from the older RD350s and those few all important extra millimetres of stroke and capacity made all the, disproportionate, difference. Ride an RD400 today and revel in the easily accessible power, feel the front end go unfeasibly light as you wind open the throttle and then delight in an auditory soundtrack like little else. Without a water jacket to temper the noise the rider always get to hear more of what the engine is doing and that’s no bad thing. Every bike has its signature tune and the 400’s is pretty much unique. 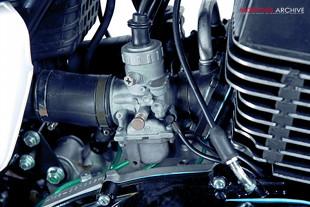 We sold and serviced them
A cracking bike that went like stink and a top seller for Yamaha just like their Fizzies of the period. I really don’t recall any memorable issues with them, they were generally very reliable. The only big sellers we had in terms of parts were all the bits that took a hit in the inevitable crashes that happened. The points models (C&D) were obviously a little more demanding in terms of maintenance; the E and F models had factory fitted TCIs which made life much easier. In fact it’s the one upgrade I think I’d always suggest retro-fitting from one of the aftermarket specialists. The pattern points available are often terrible in terms of quality and longevity. Although we can still supply OEM units strangely we don’t get much call for them at £54 each. For the cost of two sets you’ve almost bought yourself a 21st century black box kit that’s even better than the later factory systems. Martin Ward of Moto-Ward

More Stories
Buying Guide: Pre 65 trials bikes: Francis-Barnett
Pre 65 trials bikes these days bear little or no relation to the way such sporting bikes actually were pre 1965, Classic Dirtbike has a look at a bike ‘as ridden’ in the day...
Features - Tim Britton, pics by Fiona Watson 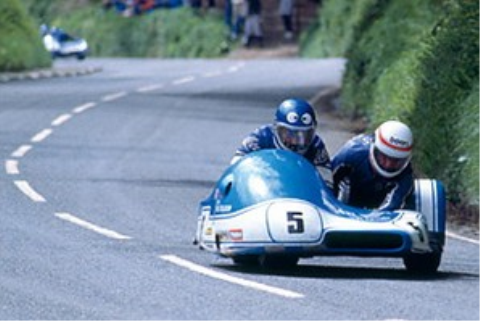 Archive pic: Nigel Rollason and Donny Williams
After an enviable run of TT and Manx Grand Prix results Nigel Rollason, with the late Donny Williams holding down the third wheel, finally stood on the top step of the TT podium after the second leg of the 1986 Sidecar TT, and in doing so made history...
Features - Malcolm Wheeler, pics from Mortons Archive
Fergus Anderson on an AJS, February 1947
Fergus Anderson poses on a new AJS 7R racer – not a machine normally associated with him – in February 1949. One of the British pioneers of racing on the continent and a ‘continental circus’ founder member (with, among others, Ted Mellors), Anderson had a rich and varied life, which culminated in his racing...
Features - James Robinson
Workshop: Stud issues
A motorcycle strip-down will often stall with fasteners stubbornly stuck in situ. Before resorting to the electric drill, a range of agents, planned force and tools often removes all but the most awkward customers...
Features - Richard Rosenthal, pics by Terry Joslin
Download the Classic Bike Hub app