From the start of the programme opener it was Gary Hocking (MV), A Gandossi (MZ), Carlo Ubbiali (MV), and Tom Phillis (Honda), who circulated the Dundrod circuit as one.

Phillis was the first to break, having slipped off at the Hairpin after his filler cap came open drenching him, and the Honda, in fuel. He pulled in to the pits at the end of the second lap.

From that moment on the MV versus MZ battle changed shape with almost every mile, with Hocking, Ubbiali and Gandossi swapping positions constantly. On the sixth lap Gandossi pushed too hard at Quarry and he and the MZ parted company, thankfully without serious injury.

Fellow MZ pilot Ernst Degner was a safe fourth after Honda rider T Tanaka fell and in pushing to catch the leading trio he set the fastest lap of the race but just failed in his mission. Bruno Spaggiari (MV), Luigi Taveri (MV) and John Hempleman (MZ), rounded out the top six.

After what was far from a dull race the victor, Carlo Ubbiali, centre, shares his experiences with, right, runner up Gary Hocking, and Ernst Degner. 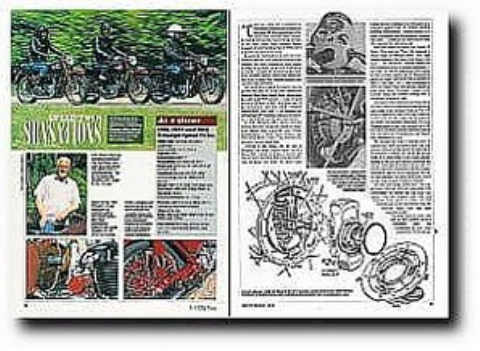 Triumph 500 group test
Three's a crowd! Rigid, sprung hub and swinging arm versions of Triumph's popular 500cc twins on test. Roy Poynting revs up with great enthusiasm for all three and nominates his favourite steed...
Features - Roy Poynting, pics Martyn Barnwell
Workshop: Velocette 250 and 350
Velocette 250 and 350 ‘iron engine’ service notes. Models covered are MOV, MAC and MAF. Consistent design methods employed by Veloce Ltd over the years make the remainder of the work simple...
Features - Bernal Osborne
Buying Guide: Yamaha 350 YR3
If you think this month’s subject matter looks like it has one foot in the 1960s that’d be a good thing because that’s exactly where it’s from! We dish up the gossip on one of Yamaha’s rarer 350s...
Features - Steve Cooper, pics by Joe Dick 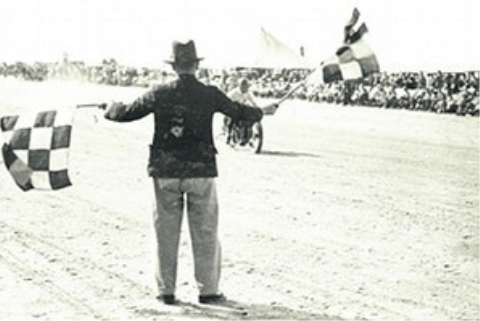 Glass plates: Beach racing at Saltburn, 1932
The first beach race to be held at Saltburn was in 1906, organised by the Yorkshire Automobile Club. More than 60,000 visitors came and the event continued to be popular until the First World War halted it. Racing restarted in 1920...
Features - James Robinson
Download the Classic Bike Hub app