Top bikes of the Seventies: 1

But when the Z1 came out in 1973 it eclipsed everything with immense, seamless power that peaked at 82 bhp giving a top speed in excess of 130 mph.

Its 903c double-overhead cam engine was a first for mass-produced bikes and dominated the machine’s presence. Perhaps too much, because the Z1’s high-speed cornering stability was marginal, which knocks it down the top 20.

Other bigger capacity versions appeared over the years and arguably the Z1000 Mk2 of 1979 with 93 bhp and a much better chassis was a superior performer - but the Z1 is still an icon of the era.

9 Suzuki GS750, 1976
After Barry Sheene won his first 500cc world championship in 1976, Suzuki was riding high. The timing for the launch of a completely new range of bikes was perfect and the first to appear – the factory’s first four stroke – was the GS750.

Some might say any superbike from Suzuki would have been a success in the circumstances but the four cylinder twin cam GS750 was brilliant, and showed for the first time that Japanese engineers could make a bike that handled well.

It wasn’t that the bike was lighter than its contemporaries: at 510 pounds it was about the same weight. It’s just that the geometry and balance was right. And with 68 bhp it was good for 125 mph, making it the 750cc class leader by far. 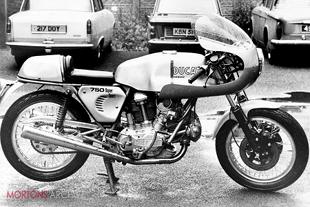 Six years later Mike Hailwood came out of retirement to win the Isle of Man Formula 1 TT and the world championship, carrying the dreams of thousands of fans with him.

But were the road versions that good? Certainly. In their Super Sport form the bevel-drive 90-degree vee-twins designed by Fabio Taglioni were less than well finished, but once ridden they were never forgotten.

The sound and fury of the engine, the solid roadholding, the crouch behind the racing screen, the lean and distilled chassis: everything added up to an experience that left you breathless.

Performance? The 900SS and the Mike Hailwood replica could top 125 mph but nothing could replicate the thrill of opening up the rumbling powerhouse. As was once said in a test report: “After the 900SS everything else is just transport.”

7 Suzuki GS1000, 1978
Suzuki's GS750 four of 1976 showed that the engineers had got the formula right, so a bigger version could only be better. Remarkably, the GS1000 that was launched two years later packed a bigger punch but was just half an inch longer (wheelbase was 59.25in) and five percent heavier at 535 pounds.

The dohc four was opened up to 998cc and delivered a peak of 90 bhp, enough for a top speed of about 132 mph. That, however, only matched rather than bettered Kawasaki’s big fours and with understated styling it perhaps didn’t have enough impact to carry the Suzuki torch.

But like the 750, the GS1000 handled well for its class, and that made it a good base for production racing. 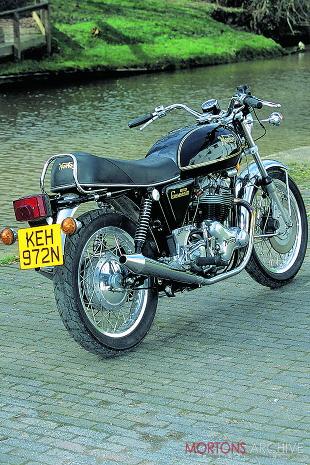 6 Norton 850 Roadster, 1973
In the past I’ve not listed Norton’s Commando in my top ten bikes of the Seventies, but on reflection and with the aid of my points system, the 850 Roadster scores well, mainly on the basis of style and performance. With a pushrod parallel twin engine whose basic design dated from 1947, Norton had been struggling against tightening noise regulations ever since the 850 Commando was launched in 1973.

The interim Mk2 version with a number of detail improvements - but the version before the heavier and power-sapping annular discharge silencers and air filter were introduced - was the best bet.

It was smooth at speed, thanks to the Isolastic rubber frame mounts for the engine and transmission, and a fine handler when properly set up. The 850 Commando had strong turn of speed with the potential for 120 mph. The Roadster, with its smaller fuel tank, offered a better riding position too. It also looked great, appealing to the traditional rider who found the simplicity of style (if not the poor build quality) appealing.

Proven over the two previous years with prototype racers in endurance racing, the CB900F redefined the four cylinder superbike benchmark.

While much of the competition felt like blunderbusses, the 900 Honda offered the sleek precision of a sniper’s rifle.

Slim and purposeful, its four CV carbs enabled clean and light throttle control yet it pumped out a peak of 94 bhp at 9000 rpm and a top whack of 133 mph, matching the full-litre Japanese fours. 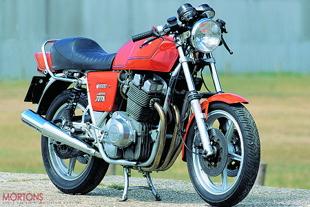 4 Laverda 1000 Jota, 1976
Husky and huge, Laverda’s Jota illustrated how a small but quick-footed Italian factory could outsmart its bigger competitors in Japan.

The family-owned factory had a stylish contender in the 981cc 3C, a double overhead camshaft triple of unique character because its crank wasn’t arranged in the regular 120-deg intervals but at 180-degrees to remove the buzziness.

Typically Italian in its handling with stiff suspension and taut road holding, the 3C offered a good platform for production racing in the UK. The importer offered a number of mods to raise performance which were later adopted by the factory.

Result was the Jota, a 90 bhp missile that was the first commercially-produced road bike to be performance tested at more than 140 mph. The Jota combined Italian style with a stunning sound and blistering performance. A masterpiece of a motorcycle.

3 Honda CBX1000, 1978
I make no apologies for listing two Hondas in the top 20 of the Seventies because like the CB400F, the six-cylinder CBX represented a turning point for the company.

Hindsight may show that the concept of a six-cylinder machine was flawed because the engine was so wide, but in 1978 Honda wanted to demonstrate just what its engineers could achieve at the time when the first full one-litre performance machines were being launched in answer to Kawasaki’s big four.

With a claimed 105 bhp on tap, the CBX was a revelation at its launch to the press at the Suzuka circuit in Japan. Power wheelies and an exhaust note like the sound of ripping calico left the strongest memories but - to our surprise - the bike handled (if only by the modest standards of the day).

What impressed was that the CBX looked and sounded great and although its poor aerodynamics limited it to a top speed of slightly less than 140 mph, nothing could remove the fact that here was a muscle machine that wasn’t afraid to display the fact.

2 BMW R100RS, 1978
Introduced in 1976, BMW’s R100RS was a revelation because for the first time it offered practical aerodynamics that enabled its rider to sit comfortably in a cocoon of air at any cruising speed up to 100 mph or more.

Even better, the Hans Muth-designed fairing kept the rain off at lower speeds as well, so the bike made a useful all-rounder, as comfortable and practical in town traffic as on the open road.

Mounted onto the familiar 980cc flat-twin’s chassis, the fairing aided stability at speed and because this was in the era before the introduction of tougher noise regulations, assisted the free-breathing and torquey engine’s light thirst, giving it a range of more than 200 miles. And because the rider wasn’t buffeted by the wind this was a practical range, making the RS a brilliant mile-eater. 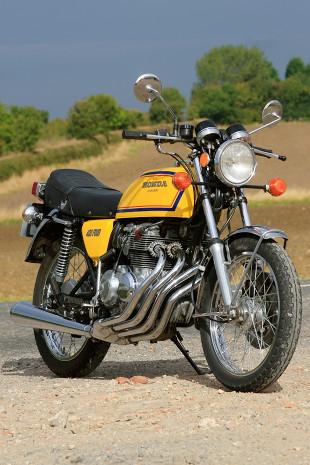 With its single megaphone-style silencer fed by a bank of four chrome headers, trim styling and nimble handling, the CB400F offered a sophisticated sports image in an accessible package.

Refined and smooth, it clocked 105 mph flat out, enough to equal the performance of contemporary 500cc machines, despite its modest peak power of 37 bhp at 8500 rpm.

The best bike of the Seventies wasn’t the quickest or most potent: the CB400F triggered the riders’ imaginations and launched them into the world of sport. It was a return to the early Sixties when Honda’s engineers took their cues from racing.

And the start of a era in which road bikes offered great all-round performance, and also looked the part too.

Let the debates begin. Hop over to the forum and air your views!

More Stories
THIS WEEKEND! The 34th Carole Nash Bristol Classic MotorCycle Show
The south-west and other parts of the UK have been battered by the recent weather but we can confirm this weekend's 34th Carole Nash Bristol Classic MotorCycle Show at Shepton Mallet will take place and steps have been taken to make it as enjoyable and weatherproof as possible...
Features - Web editor
Nev Mason book review
To be born with a heart condition which doctors predicted would be terminal at 30 could floor lesser men than Nev Mason. Shrugging off such doomsayers Nev, still active at 70, has packed more into his life than seems possible for such a short time...
Features - Tim Britton
Reference: Sidevalve 500cc Norton singles: which to choose?
Though many enthusiasts most readily associate Norton with overhead camshaft and overhead valve models, the firm’s early sporting successes came with sidevalve engines – and that valve configuration was a favourite, too...
Features - James Robinson 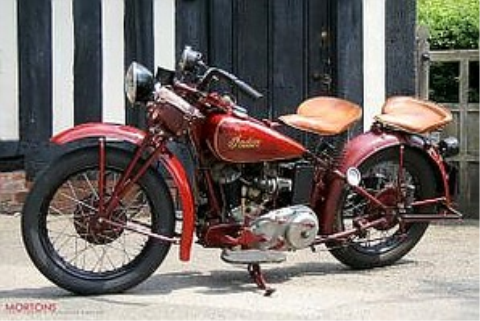 Indian: where for art thou?
When was the last time you saw an Indian motorcycle on the road? And yet everybody has a story to tell about them...
Features - Phil Mather, words and pics
Download the Classic Bike Hub app