The Pioneer is so important to the history of motorcycling we’ll take a look at not only the first Pioneer Run in 1930 but also the 1914 Old Crocks Trial that could arguably be the starting point for the whole old bike movement.

Organised on the lines of a road trial the Streatham and District MCC Open Old Crocks Trial for machines of 1905 or older manufacture attracted quite a bit of interest from the motorcycling public. The MotorCycle’s un-named man on the spot suggested that the event could almost have been the 1000 Mile reliability Trial of 1903 were it not for a number of modern machines, such as his 1913 Douglas, in attendance. 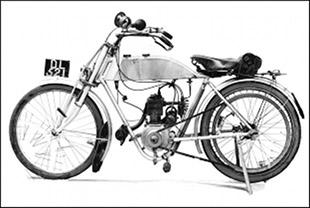 The number of such pioneer machines unaltered since their manufacture was also noted. In fact one of the classes stipulated engines, carburettor, valves, ignition, lubrication and transmission should be as original. In many cases this meant even the front forks were rigid, something the writer suggested would be ‘much appreciated’ by their riders on the rough London to Brighton route as the road surface was “deplorable”. All in all the event was deemed a success and few of the early and primitive machines had to be recovered by the breakdown lorry thoughtfully provided by the Streatham club.

There was an amusing incident when the local police set up a speed trap and 3½hp FN rider Mr C Moss fell foul of the officials by recording a speed of 36mph over a measured distance. The MotorCycle wryly suggested that far from being prosecuted, Moss ought to be congratulated for managing to achieve such a figure on a nine-year-old 350cc machine.

Growing interest
No doubt between March 1914 and the first actual Pioneer Run in February 1930 there were more events for such early machines but an interesting snippet from the pages of MotorCycle on February 28, 1929, showed there was much interest in the motorcycle world for the pioneer days. Reported on was the latest meeting of the Association of Pioneer Motor Cyclists – APMC – where the claims of 60 prospective members were investigated. Membership was restricted to those riding motorcycles made prior to 1905 and 48 of the claimants were deemed to be eligible to join. According to the report the association was expected to pass out of existence after the death of its last member… last we heard it is still going strong in 2013. 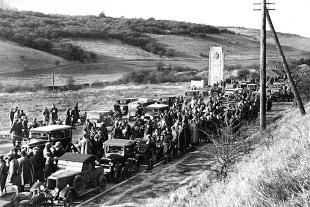 The Pioneer Run
The importance of the early machines in the development of motorcycling cannot be overestimated and the Sunbeam MCC was delighted to have an entry of 77 pre 1914 motorcycles for its inaugural Pioneer Run. The run was due to start at 11am on February 9, 1930, from the Aerodrome Hotel on the Croydon Bypass. From there riders would head towards Brighton by way of Purley, Redhill and lunch at Horley.

The event was deemed a success and so many people turned up to view the spectacle that officials temporarily lost various entrants and unlike the 2013 event, the weather was sunny, though cold. Each rider was accompanied by an observer on a modern machine as they made their way to Brighton. There were a number of machines from this inaugural event destined to be ridden in the 75th run, hopefully they will all be available for the 2014 event. This will neatly coincide with the centenary of the Old Crocks run of April 25, 1914.

A slice of Pioneering history
The first ever book on the history of the Pioneer Run has just been published by the Sunbeam Motor Cycle Club. In its large (A4) format of over 250 pages the copiously illustrated book covers the whole history from the embryonic 1914 Old Crocks Trial, organised by the Streatham MCC to the first true Pioneer Run starting from Croydon Aerodrome in 1930.

The first 1930 run was such a success that spectators and their vehicles caused chaos on the Purley Way and held up normal traffic for hours. 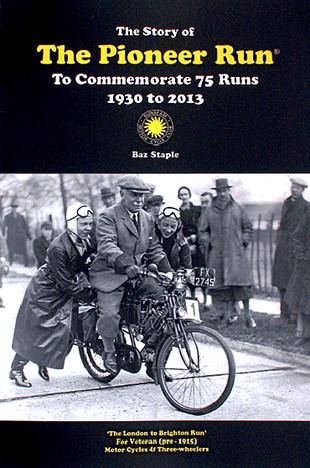 An annual event ever since, (saving the war years, petrol rationing and foot and mouth cessations) it has grown and grown as people enjoy the whole plethora of finding, restoring, researching and riding those ancient machines of any make. The latest cutoff date is 1914 and so in 2013 the youngest will be 99 years old and many are 110 years old and even older.

The book’s 23 chapters cover all aspects, from prewar beginnings to famous riders, historic machines and their mechanical aspects, not to mention the complicated controls.

Having organised the ‘Pioneer’ for all these years the Sunbeam MCC has a staggering archive of early photographs, programmes and other illustrations. More than 200 photographs, colour and black and white illustrate the book, which is printed on high quality gloss paper. This gargantuan task has been edited and compiled by Baz and Jenny Staple, with contributions by historians and specialists in their field. The pages graphically illustrate the progress of this now internationally famous event. There are fascinating and amusing exploits told by not only entrants but also by the wonderful band of volunteers and helpers, without which the run literally couldn’t take place.

As always, the Sunbeam MCC is the organising body and it is proud to announce this historic book, which will surely become a collector’s item. The book is available for sale at £23 plus £6.50 p&p for UK or plus £9.75 p&p for Europe. Worldwide postage is available on request. Order from Baz Staple, 18 Chieveley Drive, Tunbridge Wells TN2 5HQ, jennybaz.staple@gmail.com  Sterling cheques to be made payable to Sunbeam M.C.C. Ltd.

More Stories
Honda CB750/4 - spotter's guide
The original Japanese superbike, Honda's CB750, shook the motorcycling market upside down when launched and ran for nine years almost unchanged. Here’s how to tell them apart...
Features - Print editor
Workshop: Camshaft teach in
Rod Gibson gets to grips with the science of camshaft design, and enters a world full of ramps, overlap, lift and durations. But will it make the bike go faster?
Features - Rod Gibson
Classic Camera: Matchless motorway mile-eater
British ISDT team manager and AMC’s competition guru Hugh Viney wasn’t prepared to give away any details to The Motor Cycle when it went calling looking for stories to do with that season’s competition...
Features - James Robinson
Buying Guide: Ducati 900SS Final Edition
There’s an honest simplicity about the Ducati 900SS and one which wasn’t lost on me as a bike-mad teen heading into his twenties...
Features - Bertie Simmonds
Download the Classic Bike Hub app