The search started about two years ago when I decided to run a ‘Wanted’ ad in Perth’s free advertising newspaper. I had a suspicion that a 350 Motobecane existed locally as I already had a 125LT twin that was among 14 others imported to Western Australia in 1974-75. Rumour had it that a 350 came with it.

I advertised every week for about nine months when I received a call from a chap who knew someone who had one, but was reluctant to part with it.

Encouraged by this news, I ran the ad for another six months when I finally got the call. “I notice you have a wanted ad for a Motobecane 350 triple. Well, I’ve got one and I’d like to part with it.”

I couldn’t believe my ears. I arranged to meet him the next day. My brother and I pulled up at his garage door, and there it was in bright yellow with a huge bulbous tank. My brother and I stared at it for a while and then started laughing at its quirkiness. The owner was the second from new – he had bought it from the original owner, who was the importer of the 15 125LTs and this 350.

It had about 21,000km on the clock and was totally original. He hadn’t ridden it since he bought it.  It had been well maintained and not butchered. 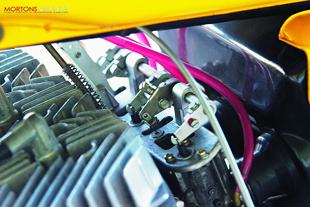 The bike was surrounded by boxes of NOS spare parts still in their brown paper bags with part numbers and descriptions, all in French. It even came with the original parts book and owner’s manual. A deal was struck and an awful lot of money parted hands.

Back home, I decided it would be sacrilege to restore it as it had gone this far and was in exceptional condition for its age. I took the in-line three Gurtner carburettors off and cleaned them out, put some petrol in the tank and kicked it over four times it fired up. I replaced the handlebar grips, changed all the fluids and treated it to a new set of Michelin tyres.

Technical stuff
In 1974 Motobecane showed the world it could not only build quality mopeds but could match the finest Japanese offerings. At the time the only other triple two-stroke on offer was the Kawasaki S2. The Motobecane (also badged as a Motocomfort) had pumped oil injection, electronic ignition, a 275mm Lockheed front disc with two live pistons, and something the S2 didn’t have: a fully enclosed chain.

The 350’s gearbox is a little disappointing with stiff, imprecise changes, but the bike has wild acceleration that lifts the front wheel off the road as the four silencers trail plumes of smoke with a throaty induction roar.

The Kawasaki could compete on price in the world market but the cost of the Motobecane limited sales to France. Fewer than 800 were built.

The 350’s tubular-steel frame is a classic twin loop design that weighs 19.4kg. The triple handles well once on the move with a hefty dry weight of 170kg.

Both the front forks and rear shocks are made by Telesco of Spain, while the Borrani alloy wheel rims are from Italy. The rear brake is a 180mm Grimeca single leading shoe drum. The 350’s barrels are tilted forward by 25 degrees. Along with the slanted head fins, this helps cool the engine’s plugs, which are fired by a Novi capacitor-discharge ignition – not prone to the wear and uneven timing of mechanical contact-breaker systems.

Each alloy cylinder has four transfer ports and the cylinder bores are hard chromed. Oil is pumped directly to the crankshaft’s five main bearings from a 2.5-litre tank. 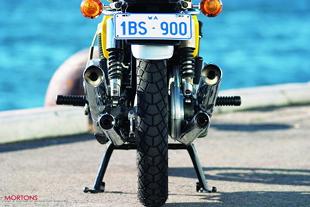 Motobecane history
Motobecane was, for many years, France’s largest motorcycle manufacturer. Founded in 1923, the company began by manufacturing 172cc and 308cc belt-driven two-strokes before taking over the Polyméchanique brand in 1928, followed by Motoconfort in 1930. Models were marketed under both the Motobecane and Motoconfort names and included such exotica as a 500cc in-line side-valve four.

Following WWII, production focussed on the lucrative moped market under the Mobylette brand name, motorcycle production ceasing in 1964. In 1970, full-sized motorcycles once again returned to the catalogue with the 125LT two-stroke single and, in 1974, this 350cc two-stroke triple, but sales were always limited by high retail prices. Alessandro DeTomaso briefly acquired the company in the late 1970s before it was nationalised.

It has since been sold to Yamaha and continues to build and market a range of mopeds and scooters, sold under both the Yamaha and MBK brand names.

More Stories
Classic Camera: Tommy hitches a lift, Ulster 1964
Road racer Tommy Robb hitches a lift on the back of a Triumph Tiger 100A ridden by scrambler Billy Hutton, after he was forced out of the 1964 125cc Ulster GP. Following a crash at the 2012 Mallory Park Festival of 1000 Bikes, Tommy has now decided to hang up his helmet and leathers and no longer participate in parades, either...
Features - Web editor
Road Test: Honda RC30 v Yamaha 0W01
Prices have doubled in less than 10 years and yet there’s never been a better time to buy a Honda RC30 or Yamaha OW01. Steve Rose explains why...
Features - Steve Rose, Ben Wilkins, pics by Joe Dick 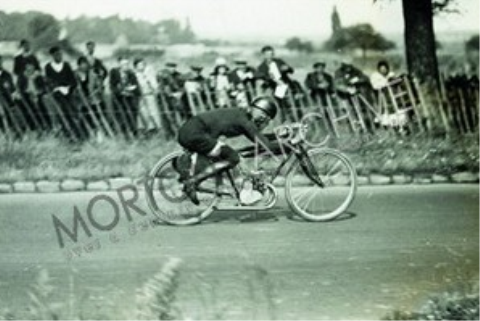