It was the hair cut which put Rex Light on the trail of the 596cc Mercury he has been campaigning in Midland vintage events this recent summer. Nor is it any old common-or-garden Mercury, for AMG 108 was the fifth and last-built of the small batch to emerge from the little factory at 1a Canterbury Road, Croydon in the late 1930s; completed just a couple of months before the outbreak of World War Two caused the project to be wrapped up. It was designer Laurie Jenks's personal model and unlike those of its four forebears the Scott water-cooled-twin engine is fed through rotary disc valves incorporated in the crankcase doors.

The hair cut? Well, it was in July of 1982 that Rex and his wife decided to pay a return holiday visit to Eastbourne, where they had spent their honeymoon. "While there," says Rex, "I felt in need of a haircut, and when sitting in the barber's chair I glanced out of the window and noticed an LE Velocette parked outside a hardware store across the road. The Velo was still there when I left the barber's, and being an inquisitive type I thought I would go across the road and enquire who owned it.

"It turned out that it belonged to the store owner, Leo Pittam. I introduced myself as a Vintage MCC member, we got talking about bikes, and he then told me that in a shed behind the shop he had a motor cycle that he was sure I had never heard of before. He took me round, opened the shed door, and that was how I was introduced to the Mercury.

"The bike was a non-runner, and had a lot of grease on it, and Mr. Pittam told me that something had gone wrong with the engine. That was as far as things went at that particular time, but in January, 1983, you may recall a television programme which features some of the bikes from my brother Jack's collection, down at Bath. Mr. Pittam saw the programme and rang me at home. Negotiations were opened, but it was not until March that he agreed I should have the Mercury, and it finally came into my possession two weeks before the Pioneer Run."

Most super-superbike
At this point it is time, I think, for a little history lesson. The concept of the most super-superbike of all time dates from around 1930. When Laurie Jenks carried out a motor cycle tour of the Scottish Highlands. In those days, Highland roads were "often no more than vile pot-holed tracks littered with loose stone. The yearning was for motor cycles providing greater comfort and easier control, but without any sacrifice in speed and performance" (to quote from Arthur Bourne's story of the Mercury in The Motor Cycle of April 22nd, 1937).

Jenks was a member of Croydon Motor Cycle Club, and he gathered around him a little band of like-minded enthusiasts, headed by a Mr. Swabey (who was the engine-tuning member of the group). In 1933 a tubular-framed prototype was constructed. incorporating some of Jenks's ideas, and from experience gained with this in the mid-1950s by sprocket king Roger Maughfling) which was described in detail in Arthur Bourne's article.

"Four have been mainly concerned in its manufacture", wrote he. "Working in their spare time they have in eighteen months from the date when castings were ordered, made up one machine and made the frames for four others—this in a normal-size garage with as their equipment a 3in  Tyzack lathe, a pillar drill, a power grinder and welding equipment."

(Who were the four? Well, on the back of one of the original frame drawings now in the possession of Rex Light is a time sheet for the month of July, 1936, listing the hours put in by T. Horton, L. Lawrence, and L. D. Brown. Presumably the other man mentioned by Arthur Bourne was either Swabey, or Jenks himself).

The Mercury is certainly bulky in appearance, and weighs around 450I b, yet the frame is constructed from I-section Duralumin extrusions, shaped and bolted to cast Y-alloy lugs. The main head lug is box-section and at the front incorporates a socket for the 2in-diameter steering ball on which the front fork pivots and which carries all the weight.

The steering principle might be described as "modified OEC Duplex", except that the steering ball replaces the OEC's upper connections. The fork stanchions are steel tubes, slotted on the front face, and the wheel spindle is secured to plungers which slide in white-metal-lined    guides.  Rear springing is by knuckle joints, with the spring boxes mounted above and lying parallel to the main frame members. For reasons of strength, the forked casting at the front of the frame, to which are attached the from fork lower links, is in bronze instead of light-alloy.

Compression and rebound springs only are incorporated at front and rear, without damping; with the machine, Rex Light aquired a thick file of correspondence carried on over many years between Laurie Jenks and his friend Leo Pittam, and in one of the letters Jenks explained that in his view undamped springing brought the wheel into contact with the road again sooner. Wheel movement at front and rear was reckoned to be 5in.

Split-level seat
In the further pursuit of comfort, 4in-section tyres were used (massive by 1930s standards), together with a split-level seat formed in Dunlopillo foam rubber covered in leatherette. The wheels were carried on light-alloy hubs to which were bolted 8in-diameter brake drums. With long-distance, high-speed journeys in mind, the fuel tank, in welded steel, was of 5-gallon capacity, mounted on rubber, and featured a toolbox and glove compartment in the top face; the compartment embodied, also, an oil tank for chain lubrication.

Later in 1937, "Ambleside" (Blick Hodgson) road-tested the second Mercury to come off the line, registered as CRK 300. Along the bumpy concrete surface at Brooklands' Railway Straight he clocked 84.9mph—"a wonderful speed for a 596cc engine, apart from the fact that it was pulling 450lb of motor cycle with full touring equipment, plus 170Ib of rider. There is no doubt that on a good-surfaced road the speed of the Mercury would be very nearly 90 mph!" 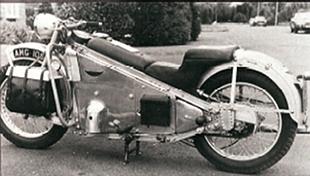 To prove the handling, Blick lapped Brooklands at 70 mph hands off. "Those who know Brooklands will apppreciate such phenomenal steering is difficult to attain, even with special track machines", he wrote.

"The little band of enthusiasts who have put all they know into this dream motor cycle," he concluded, "have achieved an object which must be the envy of many. I only wish I could have had the Mercury for a much longer period. It had been a most fascinating experience."

By 1938, Jenks and Swabey had become "Mercury Motors", issuing a proper printed brochure which quoted an ex-works price of £115, but as far as can be traced only the five alloy-framed machines for which the initial batch of castings had been ordered, were ever built. Apart from FMF 339 and CRK 300, JPK 418 cropped up at Peterborough in relatively recent times; add in Rex Light's model, AMG 108, and there is only one other not accounted for. 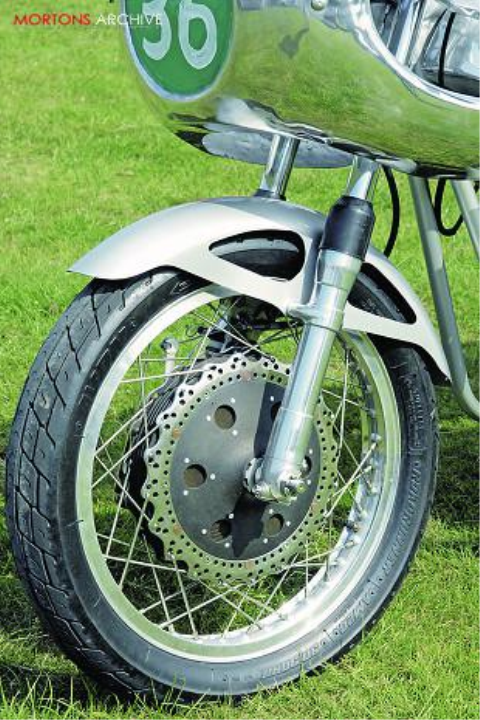 Road Test: NSU Sportymax
We’ve all spent idle hours dreaming up our ideal motorcycle but only a tiny percentage convert their imaginings into metal. One of the few is Irishman Tom Healion who spent six years conceiving and building his 250cc NSU ‘Sportymax’ racer...
Features - Richard Rosenthal, pics by Martyn Barnwell 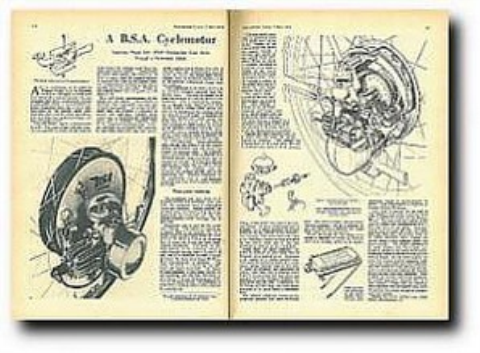 BSA Cyclemotor
The BSA Cyclemotor was an ingenius, lightweight (27Ib) power unit which incorporated a gear drive through a three plate clutch. With claims of 25mph and an average fuel consumption of around 200mpg, it was a must have...
Features - Web editor 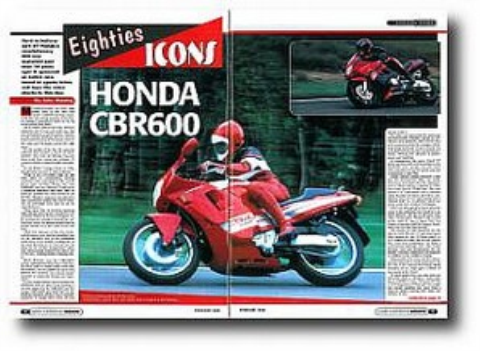 Honda CBR600
Motorcyclists in 1999 have grown used to the idea that Honda's CBR600 has been consistently the best selling machine of its class. It's almost a permanent fixture at the top of the sports bike chart. But it wasn't always like that...
Features - John Nutting 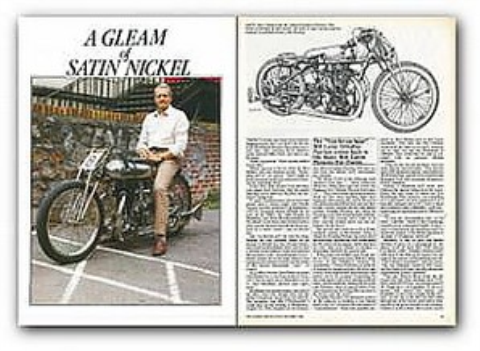 Grindlay-Peerless 500
The 'Ton for an hour' Bill Lacey Grindlay-Peerless comes back to life. But there’s always one know-it-all sourpuss hanging around, don't you find? Like the one at the Brooklands Reunion Day gathering who, after studying Gerry Belton's restored 500cc flyer, just had to say his piece...
Features - Bob Currie, pics Jim Davies
Download the Classic Bike Hub app