It’s funny what sticks in your mind, for instance, I’ve to admit to being a trials mad teenager with little time for anything other than the feet-up side of off-road until a glimpse of a smart red painted petrol tank with highly polished panels brought the Husqvarna to my attention. What the model actually was is lost on me and yes, I’ve been along to our archive to rake through the back issues of MotorCycle – printed in newspaper format by the 70s – to see if I can turn up the colour picture that inspired me but, no luck.

Of course, as soon as this feature is published then I’ll find the article. Anyway, I remember it was a colour picture and the Husky looked just like this one maybe even the exact model on show in this feature. It was probably an ISDT feature or something as that would be the first non feet-up thing that would grasp my attention. Whatever the reason, the image stuck with me and the desire to ride one was further reinforced when the models played such a prominent part in the film ‘On any Sunday.’

Fast track forward a wee bit and the news piece about Vinduro that we ran in CDB this time last year and the offer from Gav Douglas to come up and have a go at enduros. “Do you have a bike,” asked the Northumbrian. Only my Triumph Gav. “Ah, tell you what, I’ve a ’74 Husky enduro that you can ride if you fancy.” Gnnnngghhhh! If I fancy? Well, go on then… so, as you can see elsewhere in this issue, 60 miles of rugged Northumberland was tackled and thoroughly enjoyed on the great motorcycle.

First impressions
It’s fair to say that Gav – and his dad Jim for that matter – are more fans of using bikes than polishing and hiding them and I was left in no doubt that the bike was meant to be used ‘as the maker intended.’ “We could have done a really pretty job on it,” Gav tells me as he pours a drop of petrol in the tank, “but it would only get damaged during an event.” Gav’s much more interested in making the bike work well and the engine was shipped off to Charlie Preston at Husky Sales UK for attention.

A quick phone call to Charlie to see what had been done proved how reliable and bulletproof these motors are. Says Charlie “All we did was replace a main bearing, everything else was OK mechanically, the points and condenser were changed as a matter of course and they all help to make the bike a good starter.” While the engine was at Husky Sales UK, Charlie did a quick check of the top end and pronounced it fine. “It’s often better just to leave well alone on a Husky, there’s nothing to go wrong with them.”

Asking about maintenance for regular users, Charlie came up with a very basic routine that would be familiar to anyone involved in the 70s off-road scene – ie before disc brakes. Basically both wheels need to come out to clean the drums and pivots of the back plate, the air filter needs washing and the carburettor floatbowl needs emptying. “Other than changing the oil on a regular basis there’s nothing much else to do to them. There’s plenty of spares available, NOS – New Old Stock – or reproduction and the quality is good,” Charlie adds. The spares level is so good for some models of Husqvarna that Mr Preston decided to build a new 1975 360 MXer from NOS. “We just pulled stock from the shelves and apart from one or two items, now sorted, we found we had everything available. All we need to do is get some time to put it together.”

On the go
It’s the nature of a bike test that, while it would be nice to spend a bit of time getting used to an unfamiliar machine, all I tend to get is a quick ride then it’s on the start line. This was the case here but it was enough to find that I’d be comfortable on the bike as it is, Gav is the same height as me so the controls fit and even the bar position was right. With the tank fuelled, carb tickled – note for younger readers ‘tickling’ is done to enrichen the mixture, not to make the bike giggle – it took two kicks for the cold motor to fire.

Initial impressions that the kick-start would be a bit awkward to use on the course proved unfounded as I only stalled the WR once having come off an open track in bright sunshine and straight into a wood which was pitch black and, in the time it took my eyes to adjust I’d shouldered a tree, shut the throttle and couldn’t get the clutch in before the motor stopped. It took seconds to get the bike fired up.

Anyway, the initial ride round in Gav’s yard showed the brakes worked, gears, all five of them, were easy to engage. “How does that feel?” asks Gav. “was the carburation OK? We’ve only just got the bike back together so it might need a bit of adjustment as the day goes on.” I reported that all seemed well and was instructed to give the bike plenty of throttle. “I used to motocross this one before we realised it was actually an enduro model.” I zipped off for another quick ride, going up and down the gearbox and even let the motor bog down in too high a gear to see how it would react, which is exactly the sort of thing that can happen during an enduro and it’s nice to know what’s going to happen beforehand. OK, so, going along a straight track isn’t an enduro but it still helps to try out a few things where there’s no chance of the rest of the entry running up your exhaust pipe.

Satisfied with things I rode back to the yard and handed the bike over to Gav, for its final check over… how long did you say it was since the bike was put back together? A week or so…

On the morning of the event, the bike was waiting for me in the Parc Ferme, my start time was announced and a helpful – if extrovertly attired – mate ran through the procedure of enduros. “Don’t go in the box until it’s your time or you’ll lose points, oh and you’ll lose points if the bike won’t start in a minute… Mike, Mike, Mike… starting is its default state, it wants to run, it’s where it is happiest, all I have to do is help it a little with the kick-start…

On the start ramp, two kicks later and I’m off, accelerating across the grassy field – still wet from morning dew – and the rear end wriggles a bit though a bit more on the throttle squares it up. A mile or so into the course and there is the motocross test where I can let rip rather than try to maintain a time. Consisting of several climbs and drops on a bankside, the MX test was about half a mile and I got carried away leaping off the top of a bank in third then trying to blast up a camber had the motor bogging down… oops, second for that bit next lap, a bit of frantic gear pedal work and the engine cleared up but the back end hopped a bit as the power came in.

I managed to lock everything up when I realised I was looking at the return loop instead of the part of the course I was on and needed to turn sharp left… then leap over a ditch full of mud… instantly. This ditch would get wider and wider as the day went on and by the last lap would need to be ridden in to and then out of, like a trials section. The bike coped well with the flat out blast and the nadgery stuff too, it took me a mile or two to become familiar with the ratios and what I could do in them but generally the bike was confidence inspiring.

Also inspiring confidence was the way the basic suspension – basic compared to the monoshock systems of a few years later – coped with all sorts of terrain from leaps to rutted moorland – the sort of terrain that tends to let a front end get away from the rider ending then in a heap. What I mean there is as you’re pounding across the fells or wherever and the front wheel starts to patter about seeming to be hitting every bump when the rider expects a hollow and the rear end is on a completely different route, the inevitability of tasting scenery is creeping ever closer.

Even at highish speeds – for me – I never felt as though this was going to happen and, as I kept on a revised, tighter schedule, I mustn’t have been hanging around. With a constant pounding of this sort the rider’s upper arms or back can take a beating but the suspension on the Husky took care of the rough stuff. As a trials rider I felt a little uncomfortable sitting down a lot but the bike worked a whole lot better in most cases with me on the saddle rather than standing up, something to do with the weight distribution, even in the woods, where I needed to flick between trees sitting down was the better option.

Summing up
All in all, the WR250 Husqvarna was a vey enjoyable motorcycle to ride with no surprises in the handling department. The owner had pointed out the carburation might have needed a little fettling as the day went on but I’m more inclined to think the bogging down problems are ‘rider error’ rather than bike error and after a few weeks with this bike then I’d be much improved. 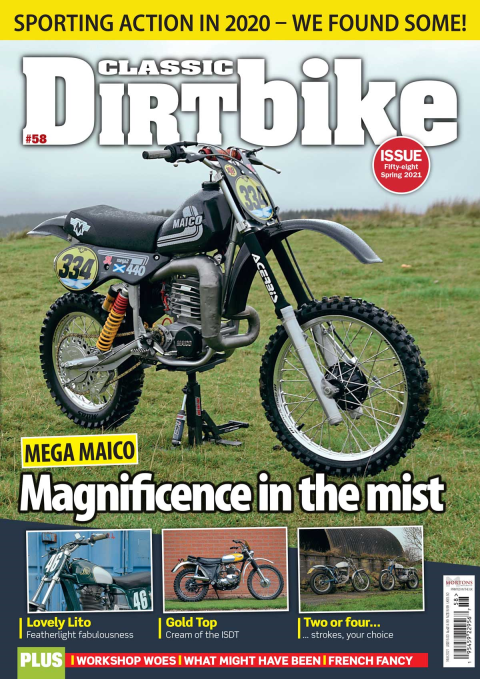 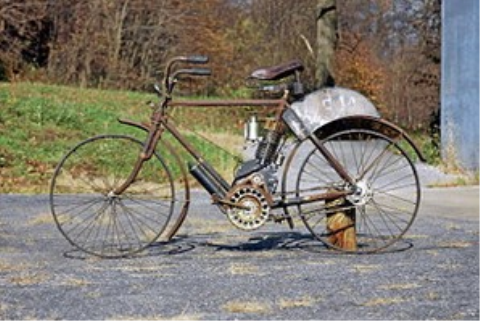 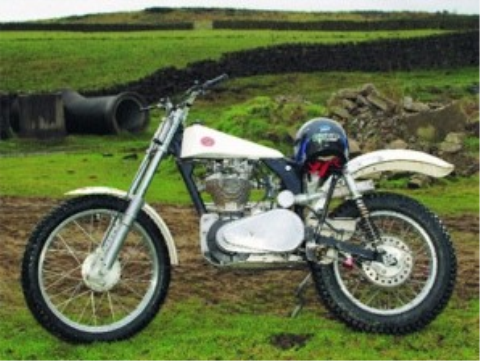 Road Test: Gaunt Ariel
“What goes in to making a winner?” is the eternal question of all competition riders. Closely followed by “would we win on it?” CDB tries to find the answers
Features - Tim Britton 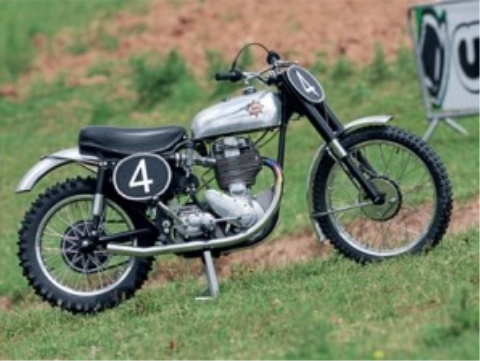 BSA Gold Star test
Almost any picture of a scramble in the 50s will show the majority of the entry mounted on Gold Stars. Vic Allan has a look at how this domination came about
Features - Vic Allan 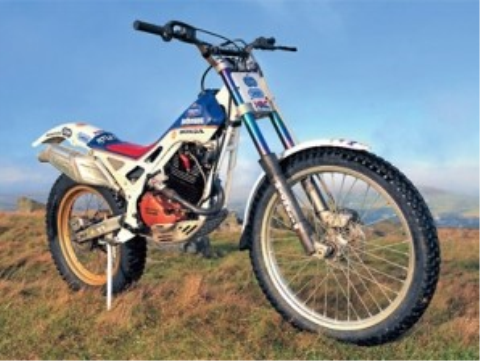 RTL Honda: a touch of class
Honda seem to have two ways of doing things – create an 'everyman' machine or an out and out world beater. CDB tries an example of the latter
Features - Web Editor
Download the Classic Bike Hub app