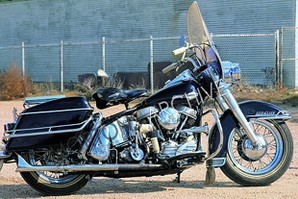 Friends since childhood, William S Harley the designer and Arthur Davidson the fabricator had been nurturing an idea to build an outboard motor, to reach their favourite fishing spots. But two wheels soon prevailed over two reels... In 1903, Arthur’s father erected a 15ft x 10ft backyard shed that bore the painted legend HARLEY-DAVIDSON MOTOR CO and the foundations for a legend were in place.

The main new feature of the 1948 FL was the top half of its engine. The 73.73cu in (1208cc) motor had cylinder heads made of aluminium, making it lighter than the knucklehead. Its round ‘panhead’ valve covers were uncluttered in a way that matched the overall streamlining. More importantly, hydraulic valve lifters and internal oilways fed by a new oil pump meant that the engine ran cooler and more efficiently. The frame was stretched to accommodate the slightly taller motor within ‘wishbone’ bowed front downtubes.

A new hydraulic, telescopic front fork a year later ultimately bestowed the benefit of a model name for the FL: Hydra-Glide. It was the first time the factory had officially christened one of its products in this way. The new fork both looked and performed more smoothly than the springers it replaced. Dry weight of the 55 horsepower motorcycle now approached 600lb, built for comfort rather than speed with a maximum potential no more than 100mph. A left-foot gearchange became an option in 1952, the final year in which the smaller 61 cu in panhead motor was sold. 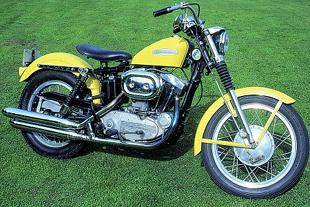 While the big cruisers had been growing heavier with each new model, the qualities of light weight, nimble handling and brisk acceleration had not been forgotten. The sudden popularity of British parallel twins had begun to show up the performance shortcomings of Harley’s big twins on the road and even on racetracks, Nortons winning at Daytona for four years in a row.

1952: sporting aspiration – 45K
The new unit-construction 45 K engine put out 30hp, just over half that of the big twins yet with two-thirds of their weight at 400lb. The Sports Model was, however, a genuinely thorough update in American motorcycle engineering terms. A single set of streamlined engine cases housed the clutch and four-speed gearbox. Clutch operation was by a lever on the left handlebar and gear selection was by right-foot lever. Four separate cams worked the valves. A new, lightweight frame with rear swingarm was endowed with hydraulic suspension at both ends. It looked sporty, but remained at heart a mildly tuned 45.32cu in (743cc) flathead. Its top speed of just 80mph and sluggardly acceleration didn’t worry riders of British parallel twins.

The KH model of 1954 offered a longer stroke, giving 53.9cu in (883cc) and a claimed 38hp, along with a healthy increase in torque. Top speed rose to 95mph and acceleration improved to a respectable level, despite a 40lb weight increase. Its stripped-down racing cousin, the KR, had already won at Daytona and was set to enjoy a period of dominance on the track. Factory-tuned variants were offered to road riders a year later in the forms of the KHK and heavyweight panhead FLH.

1957: sports becomes Sportster
The ohv top end that defined the new Sportster XL model offered increases in compression ratio and valve sizes, but only delivered an additional two horsepower. Cast-iron heads and barrels contributed to a considerable 495lb weight. The Sportster’s power improved the following year, with larger valves and ports. Its gearbox was reinforced and oil seals improved to contain the extra power. An XLH offshoot got higher compression, but it was the all-terrain XLCH that finally set the streets on fire. Readily identified by its miniscule 1.9 gallon fuel tank (derived from the 125cc Model S lightweight, introduced in 1948) and overall stripped-down appearance, this scrambler was hailed as a hot rod to beat the British opposition away from the lights. The factory quickly realised this and offered the XLCH in road trim from 1959 onwards.

Also in 1955, the benefits of swingarm rear suspension were extended to the 74cu in FLH Hydra-Glide, now rechristened the Duo-Glide, along with a host of improvements. An electric starter in 1965 brought a new frame (to house a larger battery) and a new name: Electra-Glide. 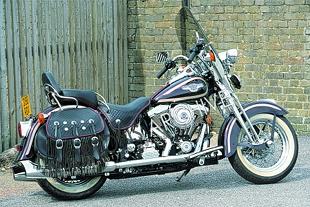 1966: the Shovelhead arrives
Once again, Harley-Davidson updated an existing model, the Electra Glide, by grafting on a new top end. Basically a larger, aluminium version of the Sportster’s cylinder head design, ‘shovelhead’ motors gave an extra 5hp from 73.73cu in (1208cc) with 8:1 compression. This was enough to haul the 783lb FLH up to an unsteady 100mph, although 55mph cruising was its natural territory. The new top end was appreciably more oiltight and less fragile than its predecessors. It would be four more years, however, before the engine’s bottom end would be updated, with an alternator in the primary cases and contact points relocated to a crank-end cover.

A motorcycle sales boom had left the company under-funded and exposed to a hostile takeover bid, so it opted for an acquisition deal with the American Machine and Foundry Company (AMF) in 1969. New corporate values placed maximum emphasis on sales volumes and so the model range was drastically expanded by badge-engineering single-cylinder Aermacchi lightweights. Regrettably, this was at the expense of significant, visible V-twin developments. Quality control, too, was not all that it should be and the brand name, now sharing badge space with the AMF logo, gradually tarnished.

1970: all-conquering racer – XR 750
One ray of light during AMF’s tenure was the unqualified success of the XR 750 dirt-track racer. Conceived as a Sportster-style update to the aged KR flathead, the first model had iron heads and barrels but was prone to overheating in distance events. An all-alloy top end cured the problem in 1972 and thereafter the XR 750 reigned almost supreme (aided, it must be said, by subtle changes to racing class rules). With a power output around 90hp in a package weighing just 320lb, it restored pride to the Harley-Davidson name during an uncertain time.

Other competition successes were achieved with that most unlikely of racing engines, the shovelhead. 1970 saw factory racer Cal Rayborn, who had helped to establish the XR750, set a new land speed record of 265.492mph in a streamliner on the salt flats at Bonneville. Meanwhile, drag racer Joe Smith broke the nine-second barrier for the first time on a double-engined monster. Yet an emphasis on racing success seemed out of phase with the customizing movement that had now reached Hollywood films such as Easy Rider. 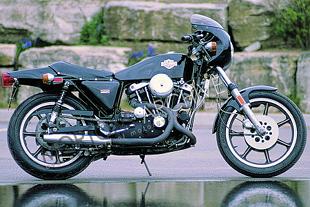 1971: the first factory custom – FX Super Glide
The FX Super Glide mated a stripped-down Electra Glide to a Sportster front end, including the latter’s 19in front wheel. Overall, some 150lb was lost from the FL, the new kickstart-only FX tipping scales at just 560lb. The patriotic red, white and blue machine carried some unique components, notably at the rear end, but amounted to much more than the sum of its parts. It was the first production Harley-Davidson to be designed primarily as a styling exercise – a factory custom. The designer responsible had joined the company in 1963 with a personal interest in a success of the products that carried his name: he was Willie G Davidson and he would literally shape the bikes’ future from now on.

The FX family line spawned a new generation of distinctive, iconic models that began to call the shots so far as style was concerned. The metallic silver FXS Low Rider of 1977, with a seat height of just 27in, transplanted the brand’s drag racing success onto the street. The look of the Sportster, bored to 61cu in (1,000cc) in 1972, was updated by the all-black XLCR café racer of 1977. Admittedly, the new emphasis on styling took a while to win back customers who had been seduced by exotic imports offering cheap technology. Harley’s retro science was more subtle: in 1980, it resulted in a return to belt drive on the 81.65cu in (1,338cc) FXB Sturgis. But engineering development also introduced a fifth gear and rubber engine mountings on the FLT Tour Glide.

Science apart, it was the FXWG Wide Glide of 1981, with its flame paintwork and chopper styling, that sent the clearest statement yet that the company was secure in its new direction and was actively targeting a new market. With brand loyalty undergoing a renaissance, the shackles of AMF ownership were finally thrown off in a management buyout that same year. 1982 brought a revived Super Glide in FXR form that set new handling and braking standards for the big twins. Meanwhile, the Sportster’s links to the XR750 racer were emphasized in 1983 by the time-honoured method of bolting on a new top end, and so the twin-carb, 71 horsepower XR-1000 was born for a two-year production run. 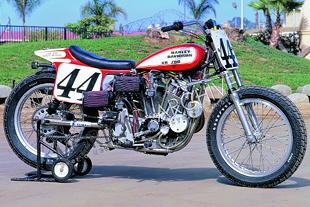 1984: evolution – FXST Softail
The FXST of 1984 marked two major developments. Most significantly, it helped to introduce the new 81.65cu in (1,338cc) Evolution engine. Alloy barrels with shrunk-in iron liners housed flat-top pistons that ran 8.5:1 compression in squish-band heads. Market-led development had produced a rigorously engineered and totally oiltight motor that retained the shovelhead’s character in more efficient and reliable form. It was carried in a new chassis that harked back to the earliest rigid frames, but which concealed suspension units along its lower rails. The combination of new engine and new frame was critical to the reborn company’s survival and history records that Harley-Davidson got it right, first time. The Evolution engine appeared in all big twins from the following year and Softail chassis options grew to become among the biggest sellers in the range.

The styling of the Hydra-Glide was revisited on the FLST Heritage Softail of 1986, while the Sportster was updated with an Evolution engine of its own in 1100cc and 883cc capacities. Two years later in 1988, the Sportster grew to 1200cc and retro science saw leading-link ‘springer’ forks reappear on the FXSTS Springer Softail. 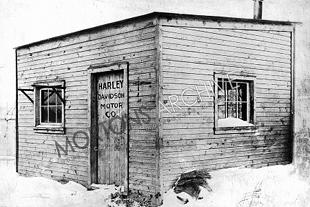 The Nineties and beyond
The Sportster finally gained belt drive and a fifth gear in 1991, a year that also saw the introduction of the cast and forged Dyna Glide rubber-mount frame in the FXDB Sturgis. Subsequent changes to the model range were largely cosmetic. However, a couple of side projects carried the Harley-Davidson badge forward into new territory during the Nineties. The company acquired a controlling interest in the activities of one of its ex-engineers, Erik Buell, who specialized in building advanced chassis packages powered by tuned Sportster motors. Even more unlikely was the factory racing project that produced the eight-valve, dohc, water-cooled 60 degree V-twin VR1000 Superbike racer in 1994. A form of the racer’s fuel injection appeared on the FLHTCU in 1995. A replacement Twin Cam 88 (1449cc) motor debuted in 1999 with a counterbalanced 88B version for non-Dyna models a year later. In 2002, an all-new performance cruiser, the 69cu in (1130cc) VRSCA V-Rod, arrived owing much of its 115bhp Revolution engine development to the VR1000 racer.

Remarkably, ‘Serial Number One’ – that very first production bike, built in a backyard shed – has survived a full century intact and now takes pride of place in the front lobby of corporate headquarters in Juneau Avenue, Milwaukee. The Harley-Davidson Motor Company now offers 23 bikes in five model ranges and continues to make motorcycles of which its founders would surely approve. 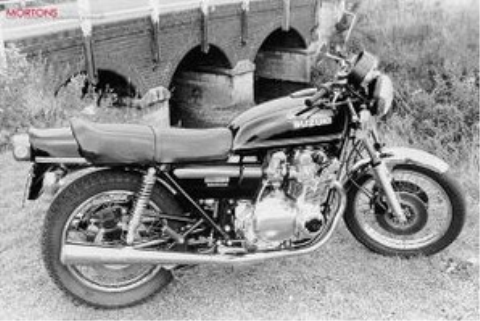 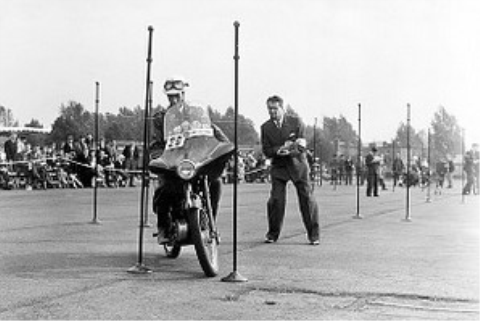 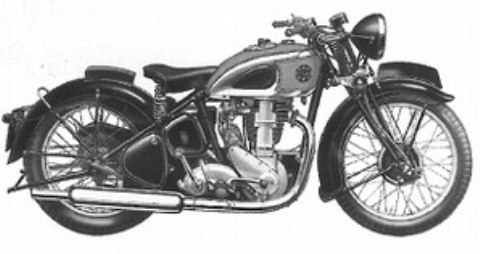 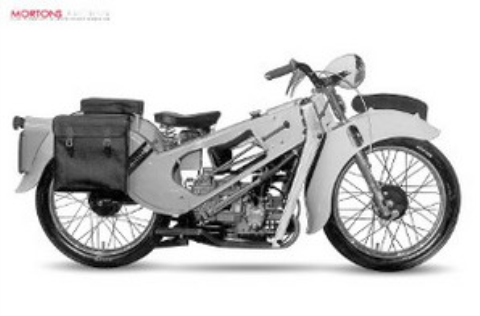 Reference: Velocette LE 1948 - 1971
Velocette's LE had a long production life, which indicated success, but it also absorbed a colossal post-war investment from the company, which in hindsight arguably did irreparable damage to the manufacturer...
Features - James Robinson
Download the Classic Bike Hub app