Electrical trouble? It's a possibility. But just how does one set about checking the electrics? Most modern machines, of course, feature coil ignition and an alternating-current system so, if there is life in the battery (a flick of the lighting switch can indicate that), the generator and rectifier can be ignored. The trouble must lie somewhere between the battery and sparking plug.

Most likely cause of the stoppage is a mucky plug. Out with it, then, and let's study the points. Reasonably clean? The gap at about that recommended by the machine's builders?

Well, let's see what the spark is like; and to do that we rest the plug on some convenient part of the engine in such a way that the points are visible, and then press down the kick-starter pedal. Of course, the plug terminal, with high-tension lead attached, should not be in contact with any part of the engine.

A healthy spark at the plug points indicates that the electrics are probably in order and that the trouble could lie elsewhere - a choked carburettor jet, perhaps. But it does not always follow. A plug of which the insulation has broken down can show a good spark in the open air yet fail when it is inserted in the cylinder head.

The next step, therefore, is to unscrew the high-tension lead from the plug and remove the cap connector, leaving the end of the cable bare. Holding the end of the lead at about ¼in from the cylinder barrel and again pressing the starter we can reproduce, approximately, conditions inside the engine. A spark which is strong enough to jump the ¼in gap should fire a healthy plug without the slightest bother. 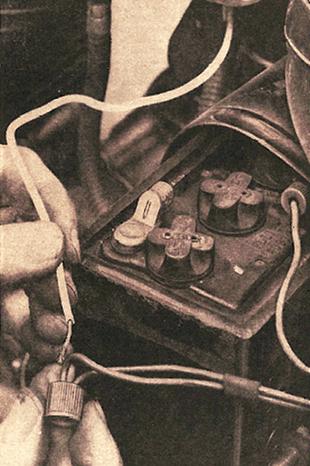 No spark at all? Perhaps there is a break in the high-tension lead. If the cable is an old one, the insulation may be perished and cracked, so causing an electrical short-circuit; or, possibly, it has become burnt owing to contact with the hot engine. If this is the case, cut the new length of cable no longer than it need be and, if the machine is a twin, as far as is practicable keep the two plug leads away from each other.

If all seems in order so far, the contact-breaker can be the next to fall under suspicion. Dust, water and oil are all enemies of the electrical system, and the contact-breaker assembly, in particular, should be kept clean and dry. With the plug removed, turn the engine slowly (it is best to do this by engaging top gear and rotating the rear wheel) and watch that the points are opening and closing.

A cigarette paper can be used as a makeshift feeler gauge to check when the points are opening, but a true feeler gauge is necessary to make sure that they open to the correct gap that’s recommended in the maker's instruction book.

Domed contact points
Present-day practice is to fit slightly domed contact points, which allow for any minor misalignment and, at the same time, provide a slight wiping action. If the points show signs of burning, and are to be cleaned up with a fine carborundum stone, try to preserve the original contour of the surfaces.

Some multi-cylinder machines have twin contact-breaker assemblies. Others use a distributor, as on a car engine, and in this case the rotor arm could be defective, permitting current to 'track' through the plastic of which it is formed.

As a check, remove the distributor cap and detach from it the lead from the ignition coil Hold the cap end of the cable about yin from the brass segment of the rotor arm and, once more, press the kick-starter. In humid conditions, a weak spark may jump the gap (this is of no consequence) but a strong spark is an indication that the rotor arm is at fault and a new one is needed. While the distributor cap is off, take the opportunity to clean the metal pickups on its underside, and check that the carbon brush in the middle is free to move in its socket.

Early pattern condensers occasionally gave trouble, particularly when used with a two-stroke engine, but modern ones employ an aluminium-foil content which, if ruptured by a shock voltage, will vaporize then oxidize, and so heal itself. There is no quick way of checking that a condenser is in order, except by substitution, but we can at least ensure that the condenser retaining clip is securely earthed.

But perhaps the ignition switch is the villain of the piece? That can be checked by running a length of cable direct from the negative terminal of the battery (assuming that the model has the normal positive-earth system) direct to the SW terminal of the ignition coil, thus bypassing the switch completely.

Charging circuit
And that's about the lot, for to check the charging circuit the engine must be a runner. Even then it is a job for the expert, with his special equipment. However, the ammeter should have indicated whether or not the generator was charging and, since the only moving part of the alternator is the rotor, there is little which could go wrong.

It might pay to have a look at the rectifier, though, just to check that it is firmly bolted to the machine; the attachment bolt serves as the earth connection, and a poor earth could cause high resistance, excess heat and a low-charging rate.

Finally, a word or two about the battery. It should, of course, be kept topped up to the correct level, which these days is usually just below the tops of the separators; with the polystyrene-case battery found on some machines the level can be seen through the translucent material.

Corrosion around the battery terminals and cable ends? A good tip here is to swab them gently with a dilute solution of washing soda in hot water then, when they are quite clean, smear on a little petroleum jelly. 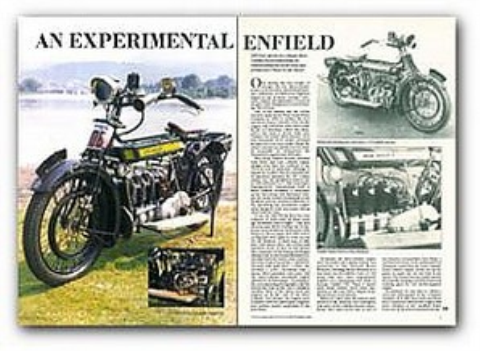 Royal Enfield 'three'
Only during the last couple of decades has the three-cylinder motor cycle become a practical proposi­tion. Until then, it tended to be regarded largely as one of motor cycling's curio­sities. But Royal Enfield had secretly tested a model much earlier...
Features - Jeff Clews, pics Jim Davies 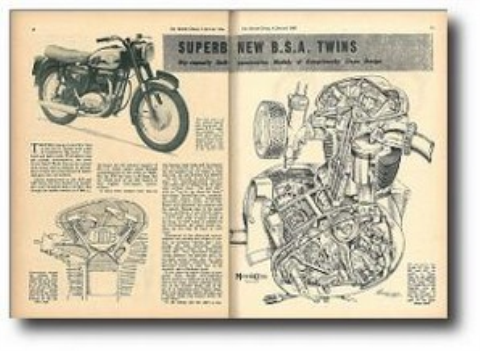 Reference: BSA A50 and A65
BSA's brand new twins, the A65 and smaller A50, are lighter than predecessors with more power and cleaner lines - as only unit construction can create
Features - Web editor
Reference: AJS Model 31CSR Hurricane
The AJS (and Matchless) CSR 'range toppers' were never quite as revered as the Triumph Bonnie or hot Beesa twins, but they were quick and popular machines nonetheless
Features - James Robinson, pics John Wilkinson 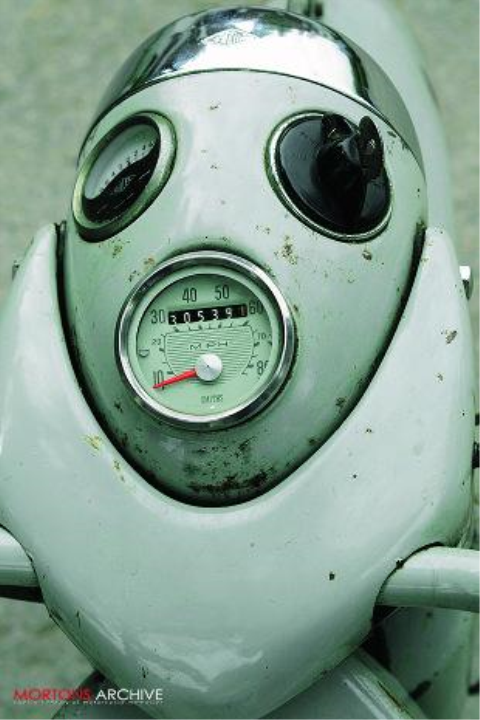 Road Test: Velocette LE MKIII
It was a simple premise – build a upmarket commuter motorcycle for everyman, one that would appeal to everyone and be capable of doing all things for all men. And it succeeded when others fell by the roadside. So why was Velocette's flawed LE so special?
Features - Roy Poynting, pics Terry Joslin
Download the Classic Bike Hub app