Unless you’re an expert on pre Second World War AJS models, it’s unlikely you’ve ever heard or seen an example of this rare 250cc twin port single, the Model 22. Resplendent with a pair of high level ‘competition style’ exhaust pipes, the quarter litre four-stroke and its 348cc Model 26 sibling was released for the 1934 season but due to a serious fall out between the AMC management and both the Blue Un and Green Un – believed to be over advertising – neither machine was put under the microscope by the period press. A great shame, because with an on the road price tag of 43 guineas in 1936 – electric lights and horn was an extra £5-10s – the 250cc single was not only a good looker, but also, undoubtedly one of the bargains of its time. How many Model 22s were actually produced between 1934 and 1940 is unclear but more than 70 years after the last one rolled off the Plumstead production lines, it’s definitely a machine which now falls into the category of ‘hen’s teeth’.

There are 14 survivors recorded on the current VMCC register but of course that isn’t a definitive list and courtesy of a chance find by Shane Lock another example has recently turned up in the West Country. Shane is no stranger to restoring unusual machines and if you’re a regular reader you might well recall his pair of James military lightweights and his well used ex-Army TRW Triumph which featured in previous editions of TCM (Feb 2008 and June 2009).

Military machines
The military machines make regular appearances at various West Country shows and rallies and it was at one of these Shane discovered the 250cc AJS; he explains: “We were walking around at the Great Dorset Steam Fair when I discovered an old bike stuffed in between two of the stalls. I could see it was a prewar AJS – but at the time had no idea what model it was. Although it was minus its twin silencers and the speedo and the rear light was missing, the wheels had been re-spoked and it looked like it had been partially restored and then put aside and forgotten about. We pulled it out and kicked it over – the compression was good – and, amazingly, on the second kick it fired up. As you can imagine with no silencers it was hellishly noisy and it coughed and spluttered a lot but mechanically it sounded fairly sweet and it just cried out ‘buy me’. 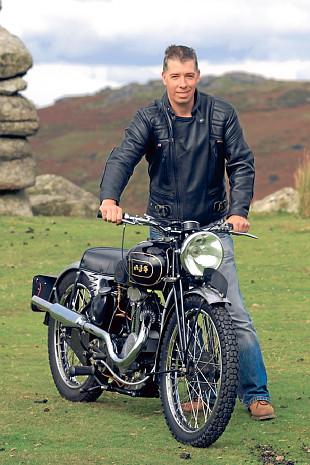 “I spent the next two days trying to decide if I really needed another bike to restore but it’s not every day you get the opportunity to buy an almost complete prewar machine at a sensible price and as I figured there was just enough room to squeeze it into my workshop, the deal was done.

“The guy selling had got the bike from a friend and knew little about its former life. On closer inspection back home I discovered that in addition to the re-spoked wheels he’d already done quite a lot of restoration work including the girder forks which had been re-bushed and a whole new set of wiring.

“The very helpful AJS and Matchless Owners’ Club was able to confirm that the frame and engine numbers were the original matching ones from 1935 – the last year for the exposed valve gear engine – and that when new the twin port single was available with optional hand or foot gearchange and either a high or low level exhaust system.

“I thought sourcing the missing exhaust would be a nightmare but thanks to the internet I discovered a site called feked.com that carries a lot of AJS and Matchless spares and was supplied with a replica set of British made pipes off the shelf.

“I managed to locate the correct carburettor and rear light unit at the VMCC autojumble at Shepton Mallet and the AJS club was able to fix me up with a speedo drive and cable, which I mated up to a refurbished old clock from a Triumph twin. From the few minutes I’d heard the engine running at the steam fair it sounded very sweet so I decided to leave it untouched until I could get it road legal and do some ‘shake down’ miles on it.”

It transpired that Shane’s decision to leave the engine alone was well founded as not only did it start first kick, there was no ominous smoking, rattles or oil leaks from the twin port single. The gearbox, though, was a different matter. There were only two gears available in the four speed Burman and the bike’s debut run was soon cut short and it was back to the workshop.

Reasonable condition
“On stripping it down everything in the ’box seemed to be in a reasonable condition and as there was no obvious reason why it wasn’t selecting the top two gears I replaced the return springs and bolted it all back together. I was optimistic that it would now be okay but the road test proved otherwise and despite my best efforts it was still a two-speed gearbox.”

With my test ride looming there was no time to strip the ’box again so unfortunately my outing on the 250cc AJS was limited to a short soirée along a private road on nearby Dartmoor. The backdrop of stony outcrops and boggy moorland proved an ideal one for the ruggedly styled AJS which in its all black livery and pair of high level exhausts is a purposeful and extremely well equipped machine. Despite its modest engine capacity the Model 22 is physically quite large and this was noted when the press eventually got their hands on a Model 22 SS (Silver Streak) to test in March 1938. By now, there were three 250s in the AJS range and although the single port SS had been treated to a cosmetic ‘makeover’ – lots of chrome plating to the petrol and oil tanks and cycle parts – and a polished cylinder head and ports to give it an extra 5mph top speed, it was little different to the standard twin port model; so aside from the glitter, what were the testers’ impressions of the Model 22?

“Everything about this machine is big. Recessed in the top of the fuel tank is an attractive instrument and switch panel, yet the tank holds three gallons of fuel. The engine and new type Burman gearbox, in which the kick-starter and gearchange mechanisms and clutch rod lever are housed under one casing, are compactly mounted in a sturdy cradle frame. Because of its small size the engine is easy to turn over, either hot or cold with the kick-starter. At idling speeds the engine was particularly quiet both mechanically and as regards the exhaust. The setting of the carburettor was a feature on this well turned out machine. The throttle could be shut suddenly and the engine would immediately settle down to a smooth tick-over, which could be slowed to an almost absurd degree by retarding the ignition.”

'The tester went on to sing the praises of the clutch which he described as ‘light and requires a comparatively small movement to complete the operation of withdrawal’ but he wasn’t quite so complementary about the gearbox.'

The tester went on to sing the praises of the clutch which he described as ‘light and requires a comparatively small movement to complete the operation of withdrawal’ but he wasn’t quite so complementary about the gearbox.

“On the other hand the gearchange of the particular Burman gearbox fitted was not as positive as it should have been, and a certain amount of difficulty was experienced in selecting second and third gears... Otherwise, the Model 22 is extremely comfortable. The riding position is upright and enables the rider to transfer his weight from the saddle to the footrests without having to pull on the handlebars. All controls are conveniently placed and the brakes – which in a crash stop in gear – brought the machine to a standstill in an exceptionally short distance and were excellent.”

The problematic gear selection problems prevented me from emulating the period speed tests in which the rider saw an indicated 71mph on the speedometer but from my all too brief ride it was easy to see the many pluses of the little AJS. Big bike looks, first kick starting and a superbly comfortable riding position all contribute to a very impressive and rideable machine, one which in the hands of its new owner I’m sure will – with gearbox sorted – give many hours of happy and trouble free riding.