What the show reveals:

Riders who desire a lively sports machine will find their requirements met in the 'Silver Streak' range, which includes models of 250, 350 and 500cc The 350cc model may be taken as typical, and its price is very reasonable having regard to the specification. A feature is the obvious thought which has been given to the choice of gear ratios, the sporting rider's ideal of three fairly close gears with a very low first having been arranged.

Another interesting model is the overhead-camshaft racing replica, the engine of which has been brought into line with the 1938 TT models. It has the special foot-change and the new handlebar shape. Also fitted is an 8in. front brake with the TT type of drum and anchorage.

For the everyday rider who, neverthe­less, requires a good performance, the 250cc single-port ohv model is par­ticularly attractive. This model has been improved by enclosure of the valve gear and by several detail alterations that make for greater accessibility.

An ingenious feature of the AJS tank is that it can be removed without the instrument panel wires being disturbed gear and by several detail alterations that make for greater accessibility.

Although the 990cc side-valve twin has not been altered appreciably, certain details have received attention, and the model is even more suitable for use with a heavy sidecar.

In view of the desirability of extending overseas trade, a special export speci­fication is available.

All except the cheapest models in the range are provided with pillion footrest lugs to take the AJS rests supplied as an extra. Likewise, there is a new in­tegral speedometer mounting on the top of the forks, while another extra (applic­able to all models) is a folding propstand. 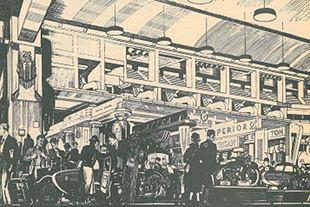 Less noticeable improvements are em­bodied in the silencer fixing attachments, and in the incorporation in the brakes of hardened wearing plates to take the pressure of the expander mechanism. Engine developments have varied accord­ing to the type involved, although the complete enclosure of the valve gear is common to all. The 250cc engines have somewhat modified inlet ports in the in­terests of both slow running and accelera­tion, while sturdier gear boxes and heavier fork springs are fitted to the 250cc and 350cc models.

The 600cc Square Four is reintro­duced for 1939, and it has an engine layout similar to its 1,000cc brother. The monobloc engine has two geared crankshafts, plain big-end bearings and totally enclosed push-rod-operated valves. A separate compartment adjacent to the crankcase houses the crankshaft gears.

The front forks have auxiliary damping springs and the new tapered handlebars are rubber mounted.

A spring frame of ingenious plunger-­cum-link type can be fitted at an extra charge of £10 to this and all other models except the two-fifties.

Similar in general design, the 1,000cc model can be obtained in standard and deluxe forms. The major difference between these two machines is in the specification. For instance, the deluxe model has a quickly detachable rear wheel, valanced mudguards, a larger tank, a saddle backrest and a prop stand.

Always popular among sporting riders, the new 500cc 'Red Hunter' is now even more attractive. Modifications have been made to the timing gear and piston,

How the valve enclosure is carried out on the ohv singles and the new handlebar and front fork springs are fitted. This model has fully enclosed and positively lubricated valve gear with quickly detachable screw-in caps that provide easy access to the rocker adjusters. Another feature, now well known, is the remote clutch housed outside the primary chaincase.

The 350cc 'Red Hunter' is similar in its essentials to the 500cc model, and is priced at £63 2s. 6d. with full equip­ment. Single- or two-port cylinder heads are optional.

Two standard models in these capacities are available for riders desiring more of a touring-type performance. Both have two-port cylinder heads and an all-black and chromium finish.

This model in its redesigned form is creating considerable interest. The new frame and forks are lighter than for­merly, and the wheelbase is shorter. Out­wardly the engine appears similar to last year's edition, but it has greater effi­ciency There is also a 'Red Hunter' on similar lines, which, with full equip­ment, costs £56 2s. 6d. 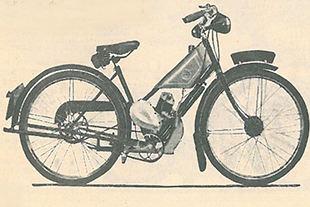 George Brough, Haydn Road, Nottingham
Stand 12a: The Sensation of the Show - the new spring-frame 'Dream' with a strikingly original four-cylinder engine

One has become used to a glittering  array of Brough Superior machines, but this year George Brough has sur­passed himself. All his famous models are there, just as bright and practical as ever, but their thunder is stolen by the presence of his new four-cylinder model, the 'Dream.'

It may be true that all is not gold that glitters, but in this case even the gold finish is matched by the brilliance of a design of absorbing interest. The power unit virtually consists of two engines geared together with their cylin­ders set across the frame. The engine is admirably cooled and particularly com­pact, while the arrangement provides an unusual degree of accessibility—the over­head-valve gear, the cylinder heads, the two carburettors, and the Magdyno are easily reached without disturbing any item other than that one wishes to in­spect.

The engine, with its geared crankshafts, bristles with novelty, but interest does not stop here. In unit with the engine is a three- or four-speed gear box from which an enclosed worm shaft is taken to the worm wheel in the rear hub.

Other points that are attracting interest  are the rear wheel suspension, the method of removing the rear wheel, the re­designed Castle forks, the ball-mounted head lamp, the. concealed tool box, and the special sidecar attachment and chassis designed for this machine.

The 'SS80 Special' is the lowest-priced machine in the Brough Superior range, but it embodies most of the refine­ments found on the others. Its engine, although very powerful and capable of a fine performance, is probably one of the most silent on the road. The spring frame and trailing-link forks are not in­cluded, but, in common with all Brough Superiors, this model is planned on luxurious lines and is finished in black and chromium. The range is completed by an 'SS80' in deluxe form, the famous 990cc overhead-valve 'SS100,' and the equally well-known 11/50 side-valve.

The manufacturers of the Dayton have been making various types of motorised bicycle since 1913. The model exhibited is a robust machine embodying the well-known 98cc Villiers unit. Pedalling gear is fitted and the engine is suspended from a sturdy bracket which gives great rigidity to the frame.

In several ways, the Dayton indicates that its designer has realised the desira­bility of heavier construction than is fol­lowed in ordinary cycle practice. A good feature is the use of 2in. section tyres. The tank holds 1.5 gallons and both wheels are fitted with cable-operated internal-expanding brakes.

The only lightweight machines with  spring frames in the Show are to be seen on the Coventry Eagle stand. There are two models, one with a 98cc Villiers engine-gear unit, and the other with the 125cc Villiers unit. Apart from the engines, the machines have similar specifications, which include pressed-steel forks, 2.25 gallon petrol tank, legshields, improved silencing, and a larger saddle than before.

The simple spring frame is of the plunger type with a single compression spring on each side of the wheel. Re­bound is checked by rubber buffers. For pillion work stronger springs are fitted.

In addition to these two spring-frame models there is a full range of the well-known 'Silent Superb' two-stroke models with 98cc, 125cc, 148cc, and 250cc Villiers engines. All have been slightly modified, the chief alterations being in the silencing system and the forks.

There are also three four-stroke models on the stand, all of which have overhead-valve engines. In specification they are little changed from the ”Flying” models of last year, but they have a smart, new finish of metallic green on a chromium base. The two larger models have hairpin valve springs.

A last minute surprise is a new motorized bicycle known as the “Autoette”. It is fitted with a Villiers unit and the price is £17 17s. 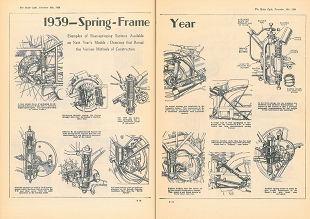 One of the earliest modern motor-assisted bicycles to be produced, the Cyc-Auto has been steadily improved and is now fitted with a 98cc Scott engine, and for the first time a clutch. In addi­tion, there is a transmission brake which operates when the clutch is disengaged.

Pedalling gear is, of course, retained, and the frame is on pedal-cycle lines. A lady's model is also available.

Both ladies and gents models can be obtained with a deluxe specification, which includes a spring front fork and a hub front brake, price £18 18s.

The 'Norseman' and 'Warrior' models are overhead-valve machines of 250cc and 350cc respectively. In each case the engines are new, and the fully enclosed valve gear is sunk- into a well formed in the cylinder head. There is a cover over the head, arranged in such a manner that the joint made with the head is well above the normal oil level. By this means, oil leaks are eliminated.

A magneto and a separate dynamo are used for ignition and lighting, and the dynamo driving chain. is located within the primary oil-bath chaincase. The chain is fitted with a Weller tensioner  and, further, there is a shock-absorbing device in the dynamo driving sprocket. These machines are much improved in de­sign and performance.

The many successes achieved during the past year add interest to the ohc 'Manxman' racing models that are on view. These, in 248cc and 349cc capacities, are available with or without the spring frame which has been used iii the Isle of Man and elsewhere. The bolted-on gearbox gives a form of unit construction, and the engine and gearbox are carried rigidly in the cradle frame. Racing practice is noticeable throughout and each engine is tested rigorously before being fitted into the frame.

The 'Autobyk' is made more attrac­tive by a new colour scheme and other minor improvements. It represents an excellent stepping-stone to the comprehen­sive range of lightweight motor cycles which are included in the Excelsior range and which offer a degree of protection and reliability well above previous designs. 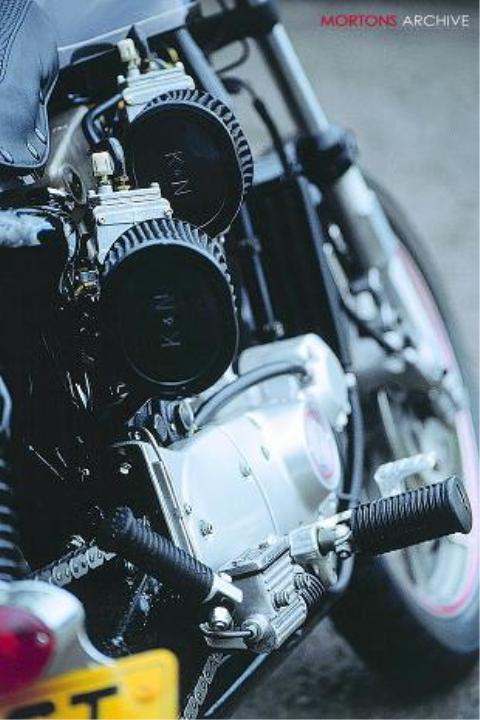 Road Test: Harley-Davidson XR1000
Neil Murray shatters the Surrey peace when he gets aboard an extremely rare, fire-breathing, road-going replica of their all-conquering Harley-Davidson US dirt track racers of the Seventies...
Features - Neil Murray 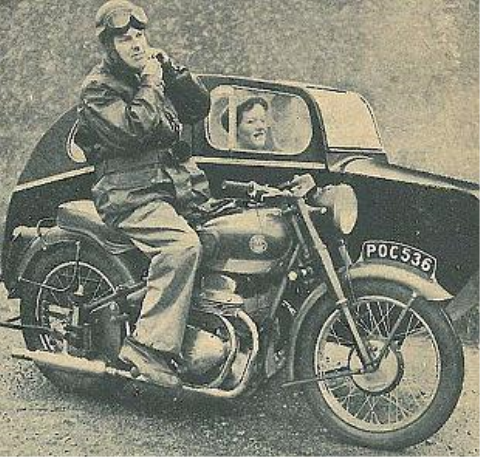 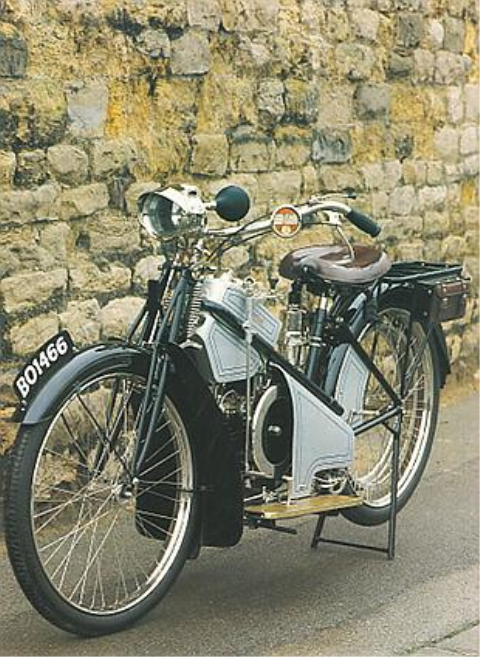 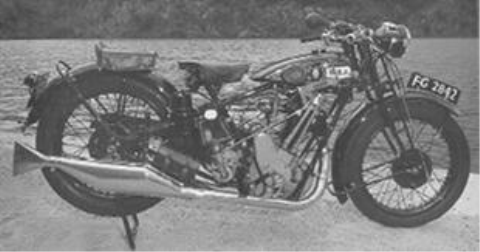