In keeping with a grand RC tradition, we were delighted to present this well-worn Meteor twin with the RealClassic Award at Royal Enfield Open Weekend in the summer of 2011. Although all bikes which enter a RealClassic concours are judged on their individual merits, this one had a charm all of its own – even down to the practical, hand-brushed paintwork. The original shade was described as ‘polychromatic copper-beech’ but that’s not quite the current colour scheme. It certainly doesn’t show the dirt!

The first Meteor twin appeared at the 1952 Motor Cycle Show and it went on sale in the following year, so Mark Mumford’s 1953 machine is one of the early production models. The OHV 692cc Meteor represented Enfield’s entry into the superbike stakes and didn’t stay in production for very long. By 1956 it was replaced by the high-performance Super Meteor, itself a development which built upon the Meteor’s potential.

Daring venture
The Meteor was something of a daring venture for the time. It was Britain’s largest capacity parallel twin and reflected Enfield’s understanding of modular production engineering. Enfield did not simply take two 350 cylinders from the Bullet single and attach them to the 500 twin bottom end – but that’s a neat summary of the process, and the Meteor does indeed share the basic layout of the 500 twin crankcase and similarly features separate cylinder heads and barrels. Considerable work was done to the engine internals and the Meteor chassis, however, to create a solid motorcycle capable of handling the additional power and torque produced by the 6.5 to 1 compression pistons running in 70mm by 90mm cylinders. This gave a maximum output of 36bhp at 6000rpm; the Super Meteor which followed boasted 40bhp.

The Meteor was expected to appeal to the sidecar market, so featured a substantial swinging arm suspension set-up to cope with the extra stress of carting a chair around. It weighed a little over 400lb in solo trim. Braking was provided by a dual arrangement of six-inch front drums (often problematic in practice) and a conventional seven-inch rear brake. Even when new, the front brake demanded ‘very positive pressure’ to get the desired result.

While the improvements to the welded loop frame and suspension proved more than capable of dealing with the additional load, the Albion four-speed gearbox could be stiff and imprecise, while the clutch – even with an extra plate over the 500 twin – struggled to cope with a fully laden sidecar. When new, ‘neutral selection from bottom gear sometimes required care…’

However, the Meteor was very responsive from low engine revs and extremely smooth throughout the range with only a minor patch of vibes at around 65mph in top gear. This encouraged early gear changes rather than high-rev riding, and made for a very relaxed ride. It pulled cleanly from as low as 12mph in top gear or, ridden flat out as a solo, was quoted as having a top speed of 105mph. In speed tests, magazine riders could not push the Meteor further than 94mph. As Bob Currie said at the time, it was ‘woofly rather than sporting.’

When it was first launched, the press of the day compared the Meteor’s performance to that of the pre-war V-twins of yore. ‘Not only does the new Meteor 700 Royal Enfield vertical twin offer most exhilarating acceleration and a high cruising speed, but both of these features are attained with a complete lack of fuss’, said Motor Cycling. The suspension was intended for touring and sidecar work, so ‘the accent is on comfort. Both front and rear suspension have soft movements and more than adequate travel for all but the severest conditions, although a succession of depressions in a poorly surfaced road will, if taken fast, induce some pitching.’ Avoid road ripples if riding today, then, or fit slightly stiffer shocks.

Swapping a Norton
Mark Mumford came to own his prize-guy by swapping a Norton Commando for it back in the early 1990s. It was pretty much the same then as you see it today, and had been rebuilt by a previous owner. Since then it has need an occasional spanner waved in its direction, although Mark says that ‘most of my work has been correcting minor problems, and replacing non-original components.’ It recently needed a ‘complicated’ top end rebuild but Mark has tried to stick to the original spec. So the Meteor still runs its Lucas 6-volt electrics with 75-watt dynamo, although for practicality, Mark has been experimenting with a breather modification to the oiling system. It’s ‘under way, but unsuccessful at the moment!’

Mark’s Meteor is used regularly for all kinds of rides, and has been reasonably reliable. Well, says Mark, it’s not unreliable, but… ‘head gaskets need regular attention on these early engines. Also a set of poorly-made cush drive rubbers melted and stuck the clutch together – but we still got home!’

Since that incident, Mark has taken care to buy his spares from Hitchcock’s Motorcycles when possible, and also recommends T&L Engineering in Bedford. He also mentions that prospective purchasers should ‘be very careful when doing your research, and buy a runner. Some components are unobtainable, especially the distributor and drive to the dynamo.’

Mark knows that one day the Meteor is going to need quite a bit of work ‘realistically, a complete rebuild when the moment arrives’ but in the meanwhile Mark revels in the Meteor’s ‘effortless torque on small throttle openings.’

Motor Cycling magazine agreed. The Meteor is ‘a docile multi with a high maximum performance’ they said, ‘and a machine which will ensure great pride of ownership to anyone lucky enough to possess one.’

This article first appeared on 19th December 2011 on RealClassic.co.uk 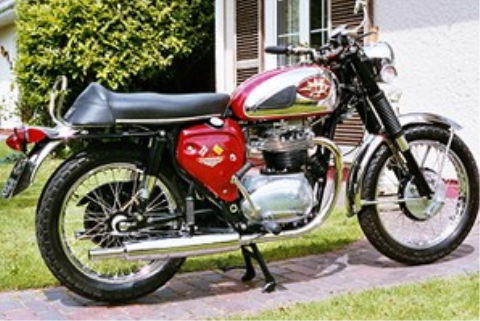 Buying Guide: BSA A65 Thunderbolt (1968)
Forty-two years after it rolled off the production line, owner Tony Clements reckons that it’s possible to keep an 650 Thunderbolt in better-than-new condition, and he’s got the prizes to prove it...
Buying Guide - Rowena Hoseason, pics Tony Clements
Buying Guide: Pre 65 trials bikes: Francis-Barnett
Pre 65 trials bikes these days bear little or no relation to the way such sporting bikes actually were pre 1965, Classic Dirtbike has a look at a bike ‘as ridden’ in the day...
Buying Guide - Tim Britton, pics by Fiona Watson
Buying Guide: Yamaha RD400
This month we look at one of the classic scene’s seminal air-cooled strokers: they don’t get much better than the Yamaha RD400...
Buying Guide - Steve Cooper, pics by Joe Dick
Download the Classic Bike Hub app