While most other British bike manufacturers developed their 500 twins into 600s or 650s in their inexorable march towards more performance, Royal Enfield skipped the intermediate stages and moved straight from 500 to 700cc. The engine design, which dated from the late 1940s, initially withstood the capacity increase because the 692cc Meteor and Super Meteor machines were sensibly tuned for around 40bhp, and engine revs were kept down to a sensible maximum of 5500rpm.

However, the ill-fated Constellation which arrived in 1958 used that same motor, now at 692cc, tweaked to output 50bhp and revving to 6250rpm. It took three years to then fix the Constellation's problems (difficult starting, blowing head gaskets, distorting crankcases, flexing forks…), but by that point the model was beyond redemption and the reputation of the marque had suffered much damage.

The Interceptor was bigger still at 736cc, but it needed to be in order to sell to an American market which was already impressed by Norton's 750 Atlas. Royal Enfield had learned from the Constellation saga, and the Interceptor was fitted with a re-designed and enlarged engine, slotted into a modified and more substantial frame. The lubrication system was revised to improve the oil flow and aid cooling, while the crankshaft, crankcases and cylinder heads were all beefed up. The result was a further gain in power, up to 52.5bhp, but spread more broadly across the rev range so the Interceptor would pull from just 18mph in top gear. 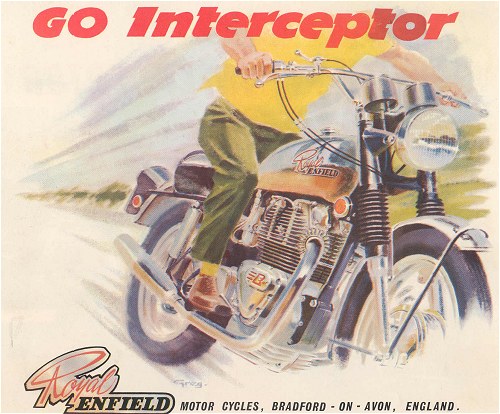 The Interceptors arrived for 1963 and they were handsome and fast, although they still suffered from vibration and occasional incontinence. Styled to suit the American market, the first Interceptors were quick off the mark and could cover a standing quarter mile in under 14 seconds. The first Interceptors would cruise indefinitely at 90 to 95mph - exactly what Royal Enfield had hoped for.

Overall, the Interceptor was a success and even spawned a Deluxe offshoot, yet it arrived too late to keep Enfield from the firm's decline. By 1965 the Interceptor was only available to export markets and the Redditch factory stopped building the twins shortly thereafter.

Production of a revised model, the Interceptor Mk1A, continued however, at a different factory (Enfield Precision Engineers, part of the same group as the main RE concern), based near Bradford on Avon.

The 1A used a two-gallon peanut tank, high and wide braced handlebars, bell-mouth Concentrics, new aluminium fork yokes, a pair of upswept silencers and plenty of chrome. The Mk1A weighed 415lb and looked to be just the job so, despite the fact that the Royal Enfield company was in near collapse, around a thousand of these bikes were built before the Series 2 - a further development by Enfield Precision Engineers - took over.

In Canada, Rod K has been getting his 1968 1A back on the road. He bought it in 2001 after it had been stored since 1974. Along with the majority of Mk1As, Rod's bike was despatched to Canada from new.

'I did the complete tear down' says Rod, 'intending to just replace the bigger missing bits and do an engine rebuild. Progress was slow in my workshop with reassembly just beginning when a bit of an inheritance came my way and I decided to turn the bike over to a professional for ground-up restoration to original spec. The work was done by Phil Dickson at PD Restoration in London, Ontario and has been completed to a most satisfactory standard. 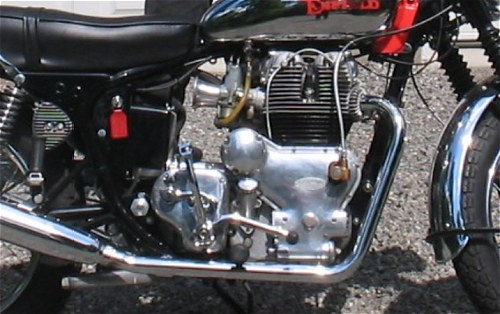 'I think I now understand why so few of these bikes survived "the day" in very decent shape. With their brute power and stump-pulling torque, they must have fairly invited abuse from young scratchers fortunate enough to have been able to buy one of these out of the box in 1968. That certainly wasn't me back then, but I surely did lust after one. Better late than never, right?

'The bike's smoothing out nicely with running-in miles but it'll be the rest of this riding season before it'll have enough miles on so I can start to test limits a bit, always respecting the fact that next year it will be 40 years old and contains a fair number of parts made of the purest unobtainium. In the meantime, I've been having a lot of fun riding it around country roads and get a big kick out of the attention it attracts from other guys my age. They remember the other bikes of their youth but may never actually have seen a Royal Enfield before.'

When Enfield were building their Interceptors, they could hardly keep up with demand. Their sales brochure says it all: 'Not everybody can have one. There aren't enough to go round. That is why the owner of an Interceptor always has something special. Something the other fellow hasn't got.' 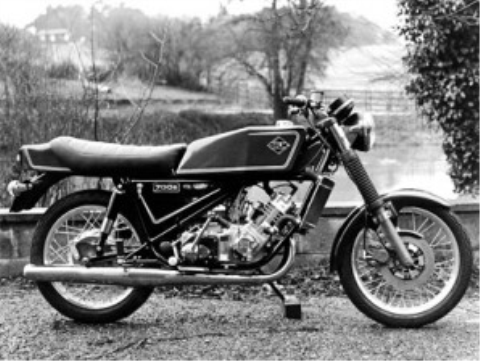 Buying Guide: Silk 700S
Rare in the extreme, so rare that few have seen a Silk let alone ridden one, but a design bristling with incredible ideas as befits the inspiration for the project – the Scott
Buying Guide - Web Editor
Buying Guide: Sunbeam S8
This revolutionary twin offered power, performance, personality and… problems!
Buying Guide - Rowena Hoseason
Buying Guide: Triumph 6T and T120
Triumph 650s are among the most sought-after classic bikes, and there are always different models available in our classified ads to suit all budgets. We consider two very different machines; a pre-unit Thunderbird and one of the last of the T120 Bonnevilles…
Buying Guide - Rowena Hoseason
Buying Guide: Benelli 750/900
Think of six cylinders and you think Honda CBX - but Benelli got there first with its 750. Later came the 900 version but Neil Murray reckons the first was the real classic
Buying Guide - Neil Murray
Download the Classic Bike Hub app