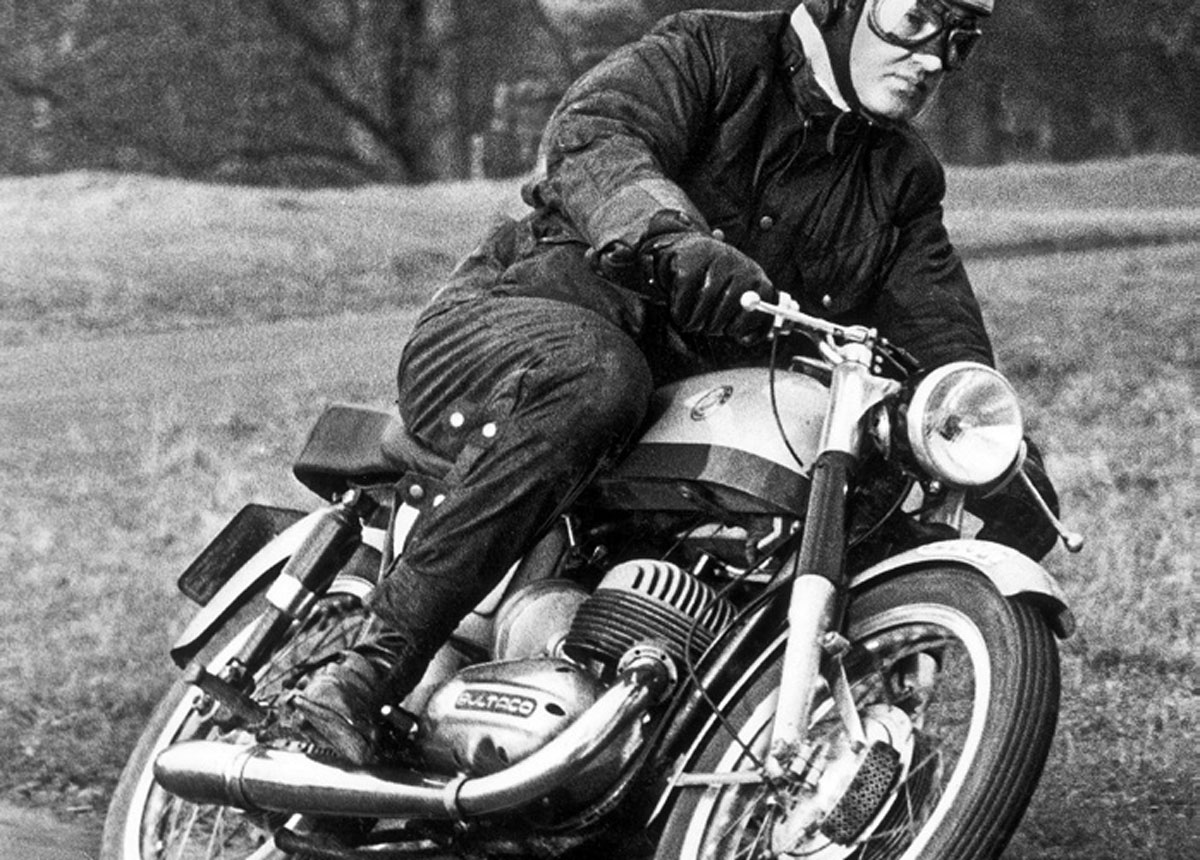 Your guide to the best (and the average, and even the not so good) European classic bikes - Part 2

Bultaco mostly built two-stroke trails and competition motorcycles but also turned out some smart road bikes. Built-in Barcelona, Spain, Bultacos were exported throughout the world but their largest market ultimately became the USA.

The Bultaco engine and transmission were universally interchangeable between models and engine capacities. The cylinder from a 175cc engine could be swapped with a 200cc, 250cc, 350cc or even 360cc capacity Bultaco cylinder.

The Metralla used the same two-stroke engine as used in the rest of the Bultaco line. Claimed, like many 250s, to be capable of 100mph-plus, the Metralla weighed just 250lb. Bultaco built the Metralla from 1966 until 1975.

The Model 23 Mark II Metralla was launched in 1966 with sensible things like an enclosed drive chain, and was powered by a 250cc engine producing 28bhp at 7500rpm. A five-speed gearbox made the Mark II Metralla much more pleasant to ride, and Bultaco released a factory racing kit that transformed the Metralla into a highly competitive production racer.

At the 1967 Isle of Man TT, Bill Smith and Tommy Robb took first and second in the 250cc production race. Bultaco dropped road bikes in 1975, but the Metralla returned as the GTS in 1978 for a few years.

Cagiva comes from CAstiglioni GIovanni VArese. Brothers Claudio and Gianfranco Castiglioni owned Cagiva, a group that had a basketball team and also made locks for luggage and chewing gum. In 1978 it bought the Aermacchi Harley-Davidson factory, rebadging the two-strokes as Cagivas.

In 1985 it bought Ducati, then Husqvarna and Moto Morini in 1987, and MV Agusta in 1991. As well as the rebadging and building bikes with Ducati and Suzuki engines, it also considered snapping up CZ and building Cagiva bikes in Czechoslovakia (as it was).

The most successful models in the UK were the Mito 125 and the Elefant. You’ll see the Cagiva Elefant logo on parts fitted to Ducati machines long after Cagiva went the way of all flesh. 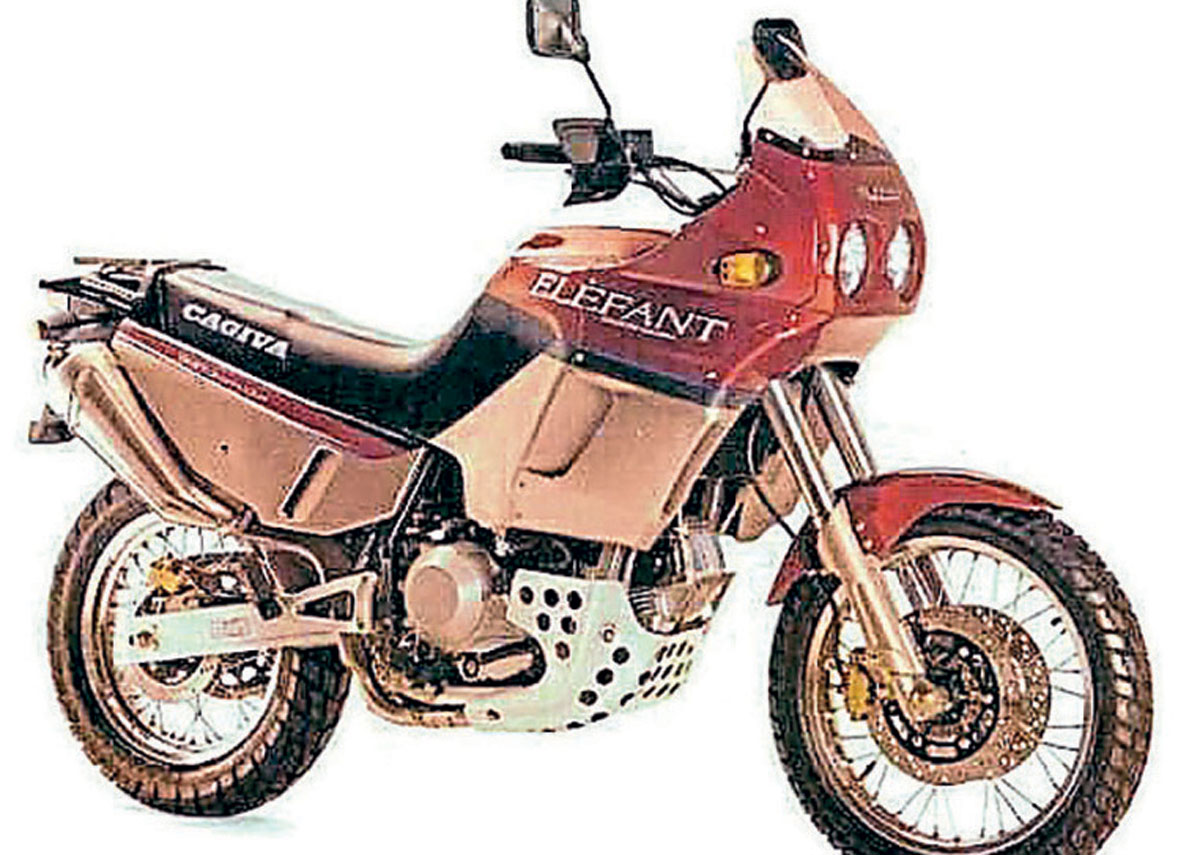 Cagiva’s Elefant was one of its longest-running models and one of just a few imported into the UK.

There were 350, 650, 750 and 900 models, though only the larger models were officially imported, all using versions of the Ducati L-twin with belt driven cams.
Because the company used the Ducati engine, parts are more likely to be available. The 900 had the best level of equipment, while the 750 was built on a budget and it showed. If you can find one, the Elefant is a useable dual-purpose machine with much to enjoy.

Swiss company Condor built bikes for the Swiss Army, and these machines have a cobby look and a great reputation. Very few were sold to civilians new, as they were massively more expensive than imported rivals. They were sold off by the army at auction, with only Swiss citizens allowed to bid. Highly regarded, a few have escaped the Alps. 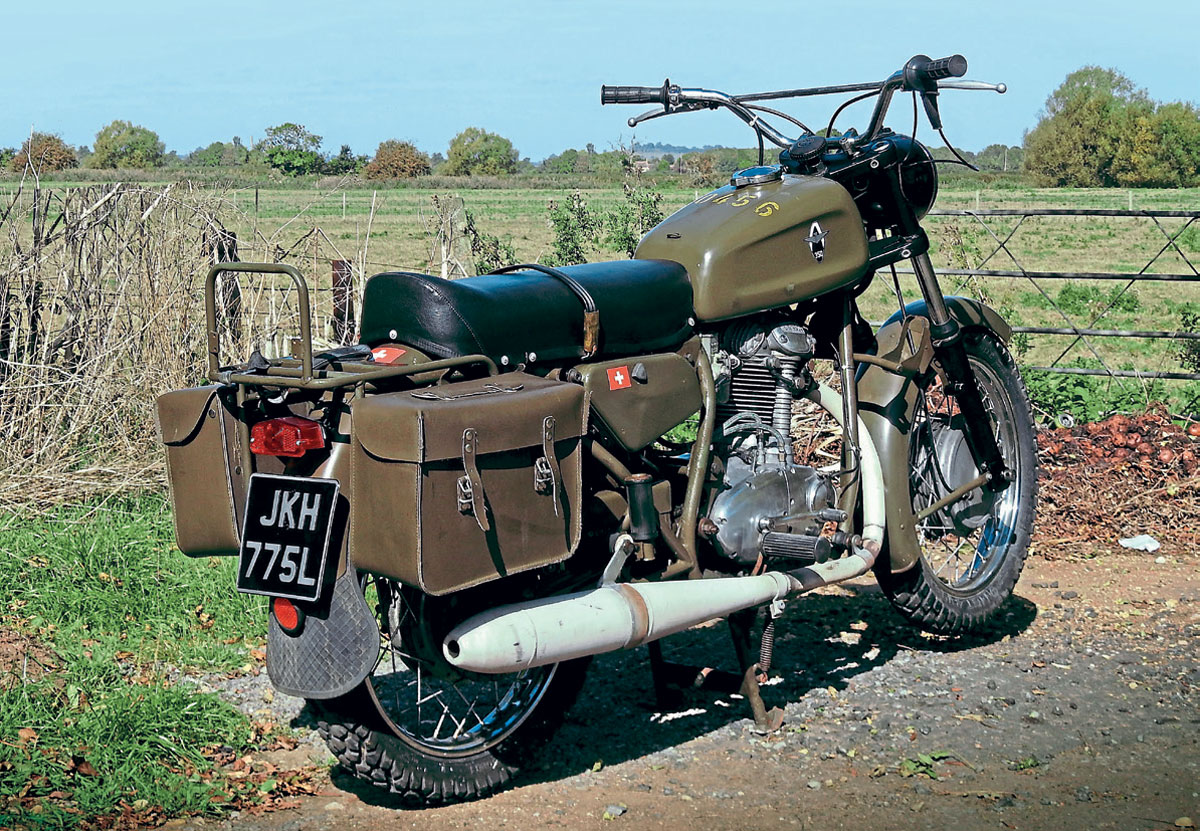 This used a heavily modified Ducati 350 motor in a tough frame, selected for use as the new Swiss military motorcycle in 1967, and 3000 were built. The plan was to import the engine’s cylinder block but this changed to import the whole engine.

The Swiss changed the set-up, fitted a low compression piston and modified the exhaust port. The steel exhaust pipe and muffler were built to run almost silently, and the exhaust assembly is sprayed with white aluminium. The engine made only 17bhp and the A350 will do about 70mph.

Designed to be reliable, grab it if you find one and fit a deactivated Karabiner Modell 1931 rifle for authenticity’s sake.

The Condor A580 has a 20bhp air-cooled flat-twin engine. These bikes are heavy, especially with a sidecar. However, the two-cylinder engine with a shaft drive made plenty of low-end torque – ideal for negotiating alpine roads.

Before the Second World War, DKW claimed to be the world’s largest motorcycle manufacturer, but in 1945 its factory was in East Germany and became the MZ plant. Production of the RT125, a workhorse two-stroke single, restarted in West Germany – and by BSA and Harley-Davidson as war reparations. In the 1970s, DKW went in a radically new direction, using a Wankel engine. 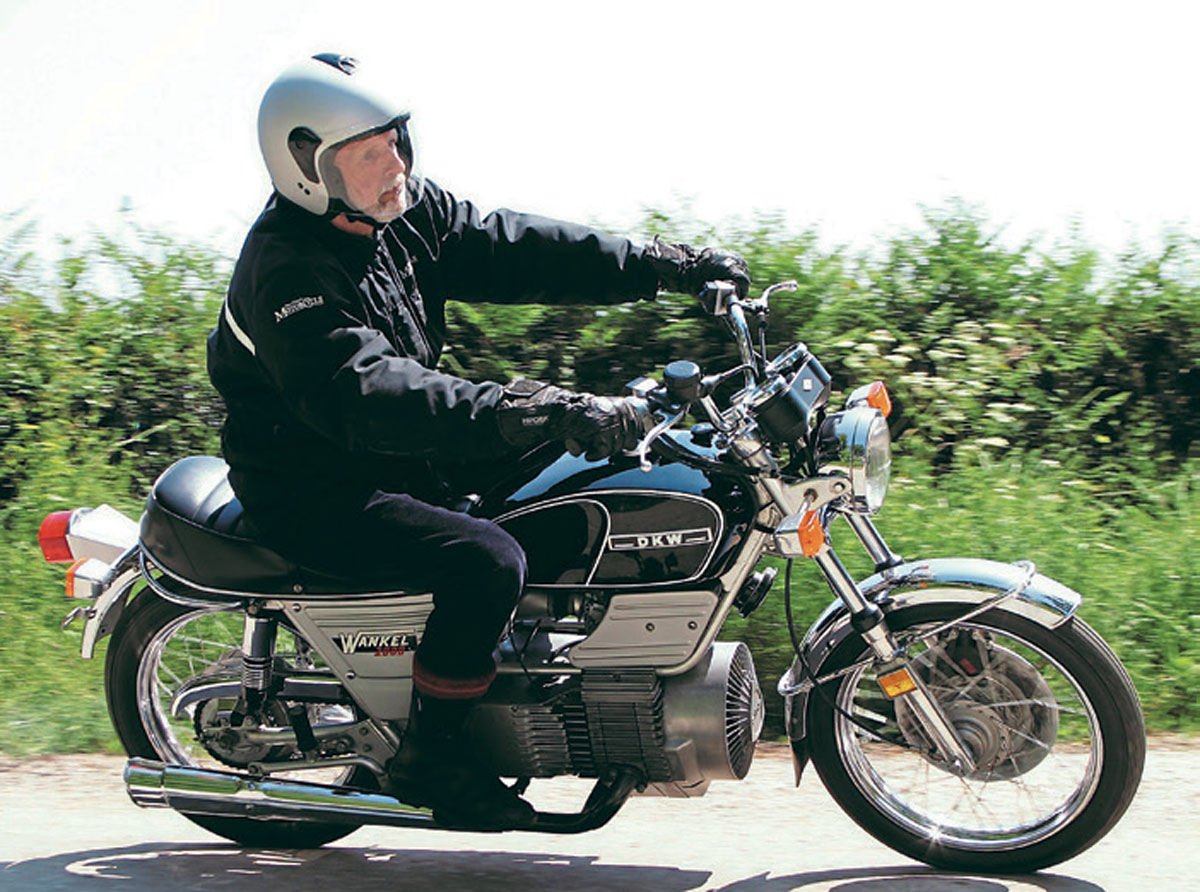 It used a Sachs snowmobile engine in a trellis type frame, and made 30bhp from its 294cc displacement. The W2000 was the exception that proves the rule when it comes to German build-quality, and the finish was less than perfect. Hard to find and a bit of an oddity, a few were sold in the UK, while the bike was marketed as a Hercules in other markets.

Ducati was an electronics company long before it started making its first motorcycle, the 49cc Cucciolo, which was at first a clip-on device for bicycles and then became a complete machine. It really got started in the 1960s with its bevel-drive camshaft singles.

The desmodromic valve operation engines arrived on the road in 1968. In 1973 it debuted the L-twin 750 desmo engine, which grew to become a 900. It also made a range of parallel twins which quickly gained a reputation for being terrible.

In 1979 Ducati released its Pantah 500 with belt-driven cams, a design that persisted for more than three decades. The firm’s had an interesting history, with multiple state and private owners.

A Ducati can be hard to live with and needs careful and expensive maintenance, but the singles and L-twins are charismatic and a great ride on good roads if you like your motorcycles sporty.

The passions Ducati engender mean they have many specialists, good spares availability and a strong owners community.

The Mach1 (or Model 3) was the enthusiast’s 250 of choice, topping 100mph on a good day – according to legend, anyway. Developed from the first singles with the bevel-driven camshaft, the early models, with engines known as ‘narrow case’, are the most desired.

The reputation of the Mach 1 has seen many more ordinary singles – if any Ducati can be described as ordinary – dressed up in Mach 1 clothing. There were also 350 and 450 Model 3 singles. Challenging to live with, but ultimately rewarding.

Popular in the US, the Scrambler arrived in 1962 and its creation is attributed to the American Berliner Motor Corporation, which was looking for a market-appropriate model.

Berliner’s involvement also resulted in the dumping on the UK market of many smaller Ducati singles when it could not sell them in the US. The Scrambler is fun to ride and hard to start.

You can see the heritage of the scrambler in the current Ducati Scrambler range, but the original is better looking. The 450 is a beast. 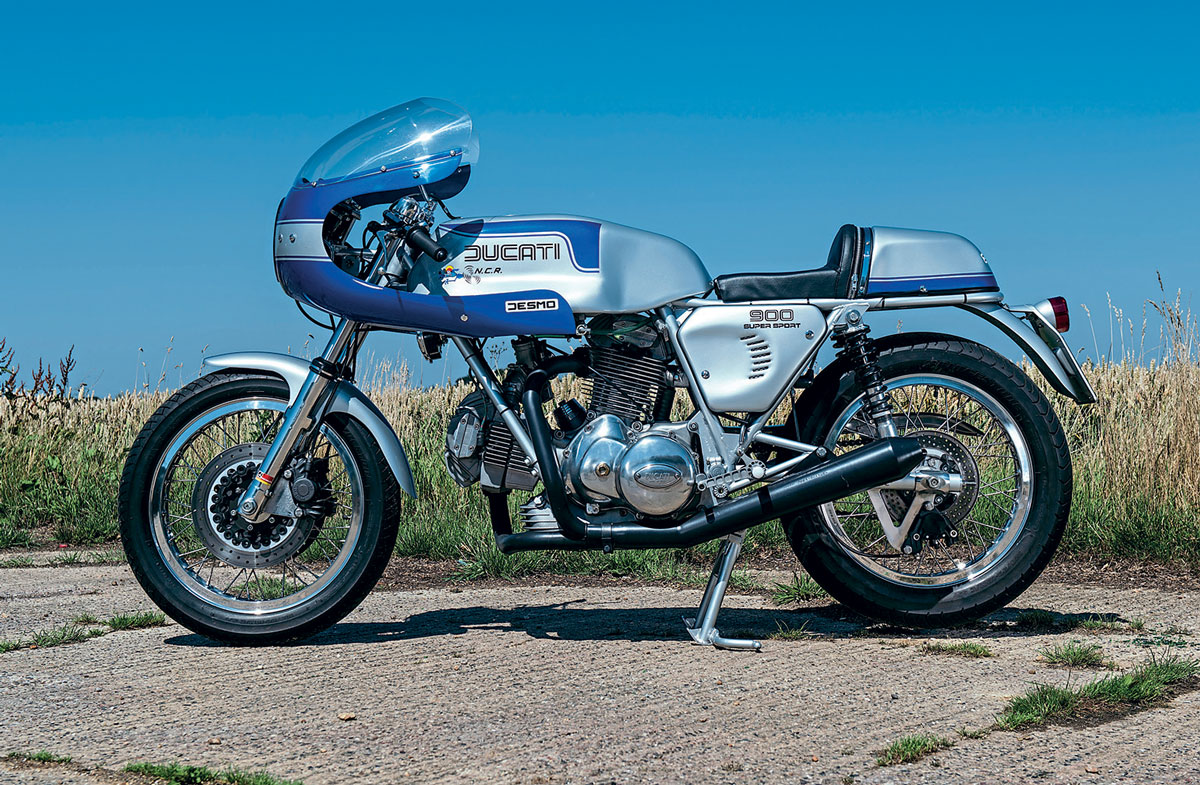 The first round case 750SS arrived with conventional cylinder heads in 1972, becoming the SS in 1973 with desmo heads. Fine handling and impressively powerful, the 750SS was also gorgeous, with a bullet-like half-fairing.

Early round case SS models are rare and sought after, and rarely see the road. A little less expensive are the ‘square’ case 900SS models, which are uncompromising sports machines, though they did become a little watered down late in the production run.

A late 1970s SS is as good as it gets if you’ve got the money to buy one. You’ll also need money so you won’t worry about the crippling cost of running one – and to engage an osteopath to ease the aches and pains that will result. Does not come with your personal Keira Knightley or a whiff of Chanel No. 5. 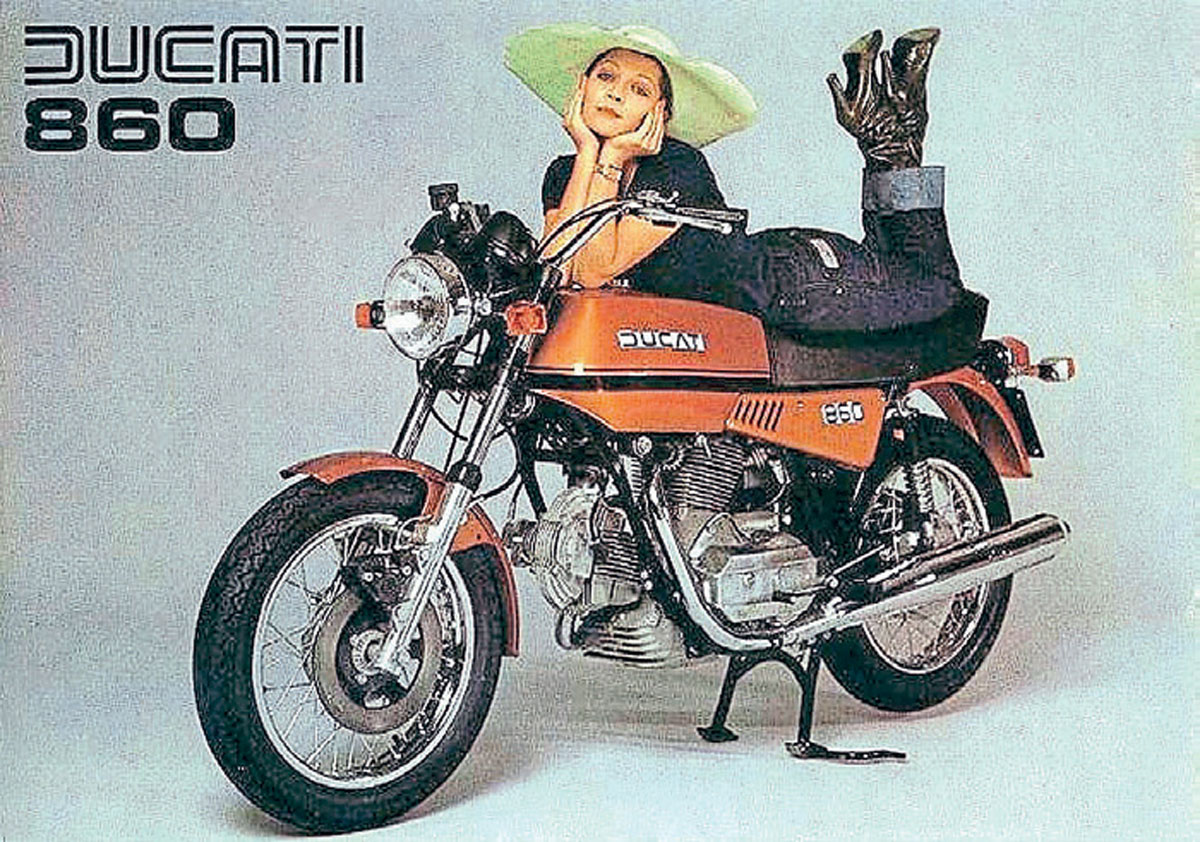 Easier to live with than an SS, the 860 has the same race-bred frame and an engine in a softer state of tune. The big Ducati twins suffered from the use of mainly poor-quality ancillaries, partly because Ducati was owned by companies that were heavily state-subsidised and had to fit Italian componentry.

The Darmah benefited from the relaxing of those buy-local rules, getting Bosch electrics and Nippon Denso instruments. Finish was poor, and they benefit from careful cleaning and, preferably, complete refurbishment.

The Pantah was the first Ducati with the low-cost (relatively) and lower maintenance L-twin engine with belt-driven cams.

The first Pantah, the SL500, had a wedge-shaped three-quarter fairing and a trellis frame, which was updated with a new more conventional fairing as the 600 in 1981 and grew to 650cc in 1983.

The 500 Pantah is popular in classic racing, often leading the pack, and that has reduced the number available as road bikes. Original equipment is almost unobtainable.

There was a period of defining 16in front wheels and all-enclosing bodywork, which did not go down well with Ducati aficionados who couldn’t see why anyone would want to hide the engine. Often forgotten or ignored on the used market, the Paso can be a cheap way to get into Ducati ownership. 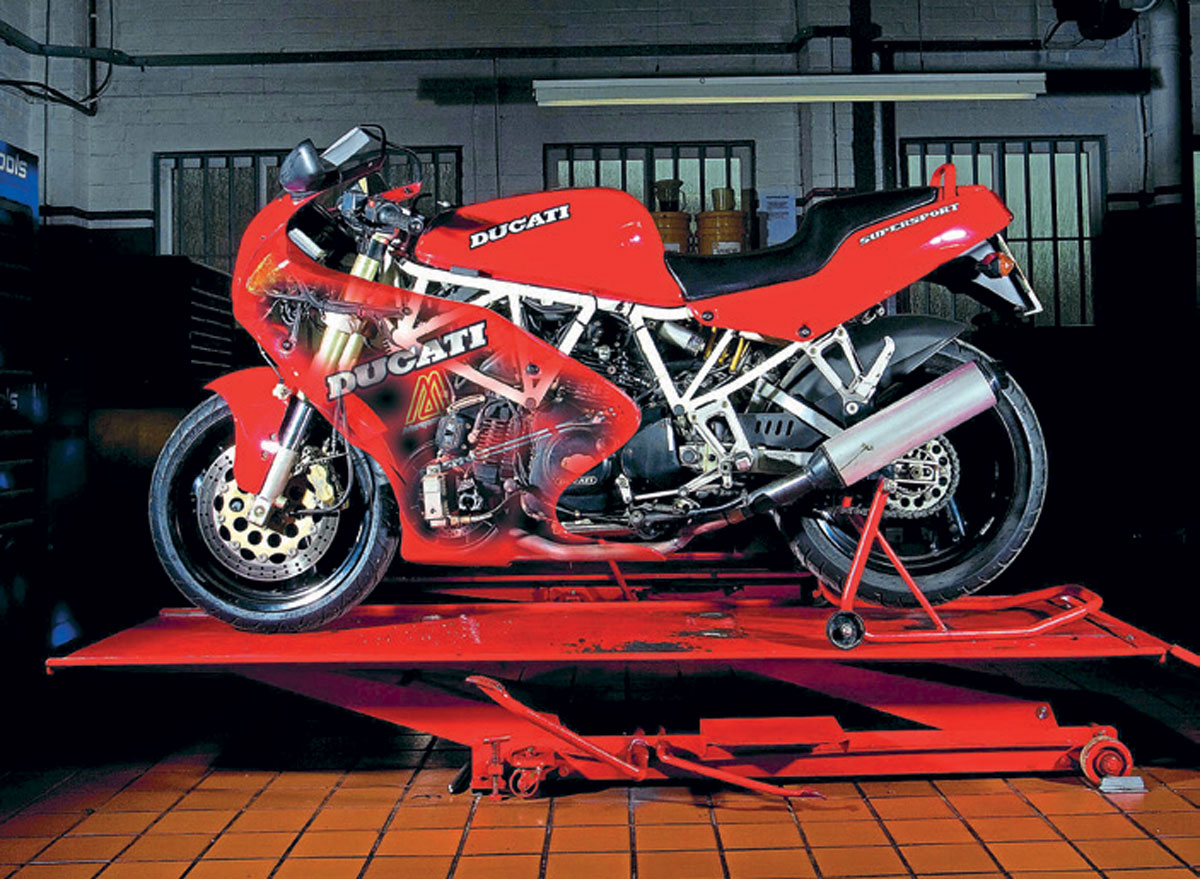 A proper sports bike, the belt drive cam SS with the two-valve Desmodue engine was a hit with buyers.

The first models had white frames and are among the most sought after, though there were incidences of the trellis cracking. Good quality USD forks and shocks and a powerful engine will see the SS keep up with the best of them.

The 600 is the budget model, with a single front disc. The 900 is a beast, and the 750 probably the most useable. Look out for special editions, the Supersport and the Superlight, which have identifying plates on the headstock. There was a half-faired early model, which is attractive.

Later models had a revised fairing and bodywork. Look out for rotting petrol tanks and expect the turning circle of the QE2. Tired examples can be cheap, but pricey to put back on the road.

The Monster is 25 years old and looks as good today as it did when it first rolled out of the factory. Both retro and sportster at the same time, the Monster has the SS engine and handling, and a comfier riding position.

The 600 is the least desirable, has the lowest level of equipment, and is thus cheapest. Early Monsters were popular city bikes and can have had a hard life. As with any late Ducati, if you can find one with something close to a service history, that’s a major bonus. Change the cam belts straight away. 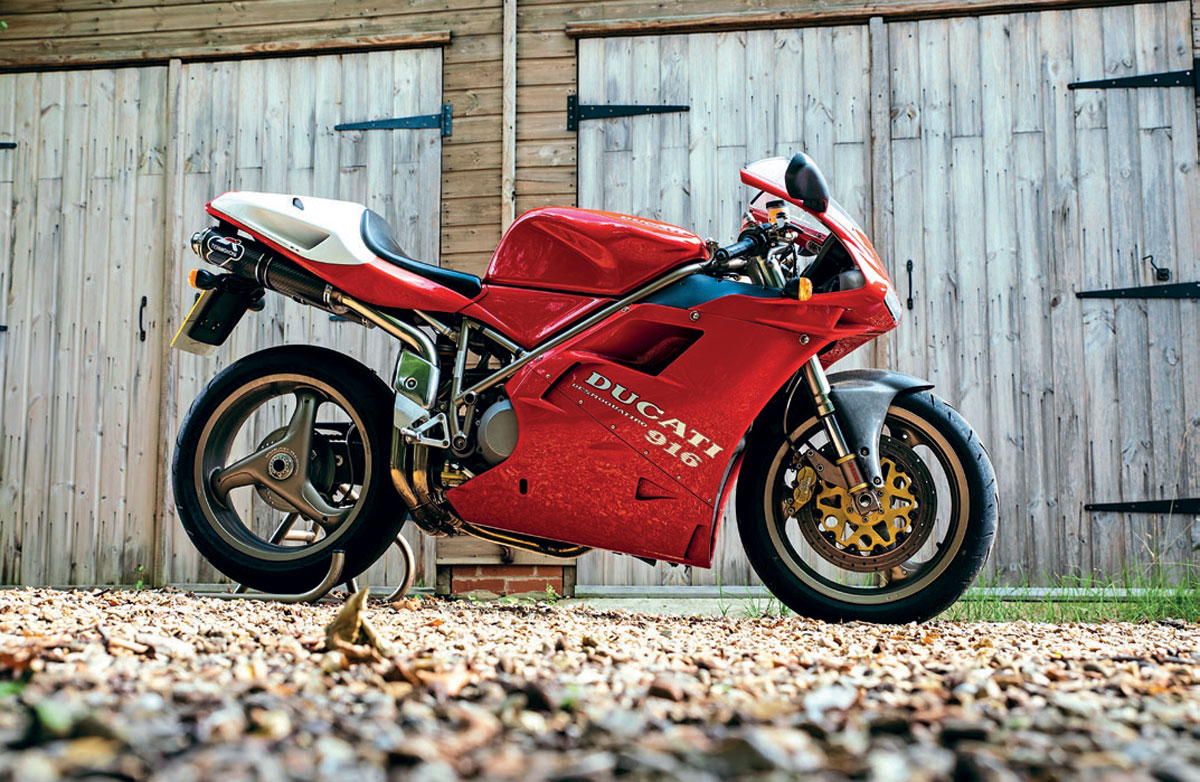 If ever there was a successor to the bevel 750SS, the 916 is it; eight valve heads, water-cooling, and world superbike championships under its belt, the lines of the 916 are gorgeous and were beloved of Hollywood film makers in the 1990s.

Like early 750SS owners, those lucky enough to own a 916 seem ever more reluctant to take them on the road and prices are skyrocketing. At least one specialist refuses to work on a 916 if there’s evidence of cack-handedness in the bike’s history.

There’s also a 748, which offers the look – if not the quite as much performance. Of all motorcycles, a 916 is the one you are most likely to find in a living room. A work of art.

Fantic made small capacity two-strokes, like many small Italian manufacturers, but what it had over and above the herd was a genius in marketing. As well as making smart trails and competitive moto crossers and enduro bikes such as the Caballero, Fantic sport mopeds were the king of the sixth form bike shed, with owners claiming 60mph top speeds from their 50s. 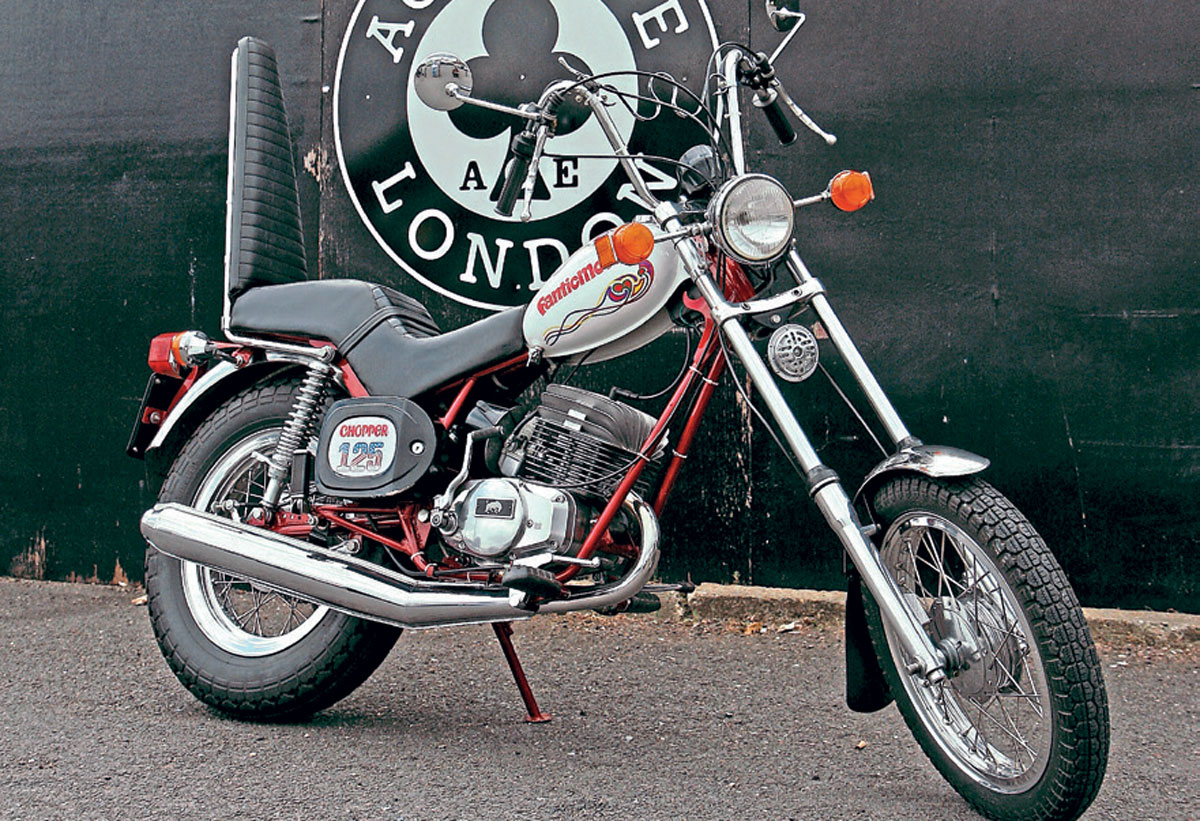 Imported from 1972, the Chopper was powered by a Minarelli two-stroke engine that Fantic used in its other models, including the Caballero and the GT sports moped.

It was garish and fitted with ridiculously long front forks and ape-hanger handlebars, with a tiny fuel tank and funky paint job. Build quality was not great, but the 125 engine was identical to that fitted to the company’s off-roaders. The factory claimed it could propel the Chopper to 80mph. Hard to find, the Chopper has a cult following.