Post WWII production centred around a range of up to 250cc lightweights. Moderately priced examples surface at Continental autojumbles, but buy complete machines as spares are difficult to find.

Lancer 1957-62 Japan
Manufactured up to 250cc two-stroke motorcycles, then launched a 250cc ohv shaft-drive V-twin which bore resemblance to the Lilac and Victoria Bergmeister. A rare but expensive find for the serious Japanese motorcycle collector. 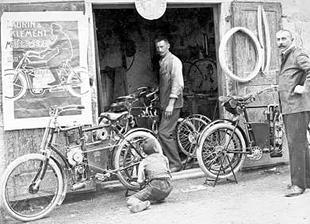 Laurin & Klement 1899-1908 Czechoslovakia (Austro-Hungarian Empire)
Cycle manufacturer founded by mechanic Vaclav Laurin and bookseller Vaclav Klement at Mlada Bolesav, Austro-Hungarian Empire, c1895. Made their first motorcycle, with a Werner engine over the front wheel, in 1899, before developing in-house single cylinder and later V-twin engines for installation in their own distinctive frames.

Began making cars in 1905, which led to a four cylinder motorcycle. Motorcycle production ended in 1908 but the company thrived building cars, aero engines and commercial vehicles. With the collapse of the Austro-Hungarian Empire their business dwindled, leading the founder to sell out to Skoda in 1925. A rare, exciting but very expensive find for the veteran enthusiast.

Keen to publicise their existence nationally, they entered a single machine in the famous Milano-Taranto race. It retired, but Laverda entered four the following year and in 1953 they took the first 14 75cc class places.

Developing a larger 98cc model, Laverda dominated the 100cc class too and also competed successfully in the annual Giro d’Italia. Despite building over the counter versions of their tiny racers, coded MT (Milano-Taranto), they began scaling down their road race commitment in 1956, to facilitate increasing production levels of roadsters.

Thanks to varied business interests, including a foundry and continuing agricultural machinery manufacture, Laverda weathered the decline in the Italian motorcycle industry. 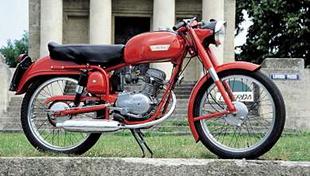 Laverda returned to racing, publicising the new model by entering many long distance endurance type events. By winning some and being well-placed in others, they soon earned a fine reputation for reliability, leading to the hand-built, race-bred 750SFC launched in 1971. Just 549 had been built by the time production ended in 1976.

Jumping the gun, in 1969 Laverda unveiled their first across the frame triple. Sharing identical bore and stroke (75 x74mm) with the earlier prototype 654cc twin, to give 980.76cc, the concept was good, but the model was predominantly a parts bin special, still four years away from production. Engineer Luciano Zen spent time developing and experimenting with both sohc and dohc design. Launched as the 137mph 3C (3 cylinder) in 1973, it boasted chain-driven dohc, five-speed gearbox, triple Dell‘Orto carburettors and Bosch electronic ignition.

The next two years were spent eradicating mechanical and electrical problems by which time it had gained twin Brembo disc front brakes in place of the earlier large drum to give customers the superb 3CL which then led to the Jota, so christened by Roger Slater of British importers Slater Bros. More great models followed, including the twin cylinder Montjuic series and the RGS. Jota production ended in 1982. 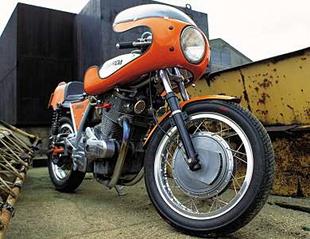 Work on the ambitious, costly, ultra-fast but ultimately ill-fated V-6 racer began in 1976. A year later saw the launch of Husqvarna engined 125/250cc Enduros, followed by 125/175cc Zundapp engined models. Laverda then lurched from one financial crisis and rescue package to another for the next 20 years, but despite all, still made some worthy models including the 650 Sport and liquid cooled 750S of 1997.

Laverda had also dabbled in the scooter market, launching their 50cc Mini Scooter in 1959 which grew to 60cc in 1962. Despite some export to the UK, sales were slow and it soon faded away, killed off by Piaggio’s launch of its first 50cc scooter, the Vespino. A shame as the Laverda was pretty and boasted the smallest four-stroke engine in a scooter.

Ownership of a large capacity Laverda classic, like that of a BSA Gold Star or V-twin Ducati, is a commitment. Highly strung, temperamental and moody, they need regular input to keep them on song, and ‘that’ll do’ maintenance is rewarded with sulks and strops. The rewards of ownership though, especially in the case of the sporty Jotas and Montjuics, can repay all the effort involved and the good news is that spares back-up and expert help exists across Europe.

Lea-Francis 1911-26 UK
Business established in the latter part of the 19th century by RH Lea and GI (Graham) Francis to build quality cycles, including the famous Lea-Francis safety bicycle.

With the advent of the internal combustion engine, Lea-Francis began considering branching out into powered transport, but instead of building motorcycles – the logical step for any cycle maker – they briefly entered car manufacture (1904-06) before reverting to their profitable cycle business. 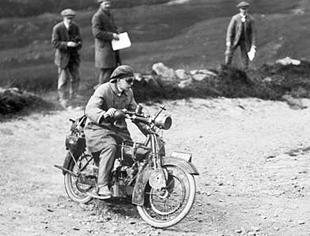 In 1911 the partners, assisted by Lea’s son Norman, developed a superb 430cc V-twin JAP engined touring motorcycle, ideal as a solo or with sidecar attached. Within a couple of years, they added 500cc and 750cc V-twins to their range, and also began using Swiss-made MAG proprietary engines which, after WWI, they favoured in preference to the JAP product.

In 1919 Graham Francis’ son Gordon went into partnership with his father-in-law Arthur Barnett to found Francis-Barnett and a year later Lea-Francis once again became a car maker.

During the early Twenties, Lea-Francis machines excelled in reliability trials, and amongst owners was playwright George Bernard-Shaw. Motorcycle production ended in 1926 in favour of car manufacture. Considering their small production rate survival of both veteran and vintage examples is good but quality isn’t cheap.

Le Grimpeur 1900 (1924)-1932 France
Sources suggest varying dates from 1900 to 1924 for the start of Le Grimpeur production. What is clear is this Parisian firm built 125/175cc two-stroke lightweights and 350cc upwards single and V-twin engined models using proprietary engines including MAG, JAP, Chaise and Auber-Dunne from 1924 on. Dresch from Etampes bought Le Grimpeur c1928.

Lenoble 1952-c1954 Belgium
With factories in Charleroi and Brussels, production started with the 150cc Sachs engined Kon-Tiki scooter. An odd name for an even odder scooter which, thanks to its fully enclosed bodywork, looked like a coffin with a wheel at either end. In 1953 came the 150/175cc Sachs engined Phenix. A rare find for the scooter collector, but not worth a great deal.

Leopard mid 1950s - mid 1960s Germany
Marketing brand for German built Panther mopeds and motorcycles used to avoid any confusion with the British built Panther motorcycles from Cleckheaton,Yorkshire. NB. During the early 1920s Leopard's were 250 and 350cc two and four-stroke motorcycles built in Germany of which no survivors have surfaced on the open market for decades. 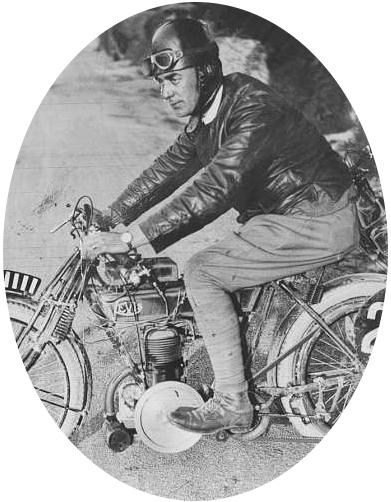 Folklore tells us a brilliant Norton engineer Bob (Howard) Newey designed a two-stroke lightweight, which he proudly displayed to Pa Norton, who’d have none of it. Crestfallen, young Bob poured out his heart to his lady love Daisy Butterfield, who just happened to have two brothers, Arthur and Billy, who were keen on the idea – as was their mother.

The Butterfields established themselves as motorcycle makers, mother coined the marque name Levis (Latin for light), Bob soon joined the enterprise and Daisy later became Mrs Newey. All-in-all, a nice, neat happy tale, and pretty near the mark too.

Mr Day invented the two-stroke engine in the early 1890s, but although Scott took to the idea, few others did, until Levis led the way. After some experimentation they settled on 211cc (62 x 70mm), a capacity which remained with them until 1926, despite the development of other models. Levis soon began competing in hill climbs, races and economy tests, with a three man team of the Butterfield brothers and Bob Newey, who soon discovered his little two-strokes went better with an expansion chamber instead of an open pipe.

Entries in the 1913/14 TTs were greeted with only marginal success, before in 1920 they scored a one-two-three, winning the 250cc cup of the Junior IoM TT, with team riders RO Clark, Gus Kuhn and Frank Applebee. Geoff Davison finished second in the 250cc class of the Junior the following year and won the first ever Lightweight TT in 1922 for Levis by a clear 13 minutes. As well as racing, Levis continued to excel in reliability trials.

Following WWI, Newey continued development of production models including the introduction of a two-speed gearbox and in 1921 a 247cc (67 x 70mm) model. For 1925, the 247cc model was given a facelift with curvature of the frame top tube in front of the saddle, pumped oiling, three-speed gearbox with kick starter and internal expanding brakes. Coded the Model K, it was another banker. The cruel could specify either a light passenger sidecar or tradesman’s box, and in June 1926 the K was offered, stripped of carrier and with special exhaust, as the Sports Model O.

Many major players, including AJS and BSA, were building sporting light 350cc ohv singles. Levis wanted a slice of the action. The Newey designed Levis was launched for 1927. It got off to a slow sales start, not helped by unreliable sporting performance, including Jack Arnott’s TT failure and Tim Hunt’s retirement in the 1928 Manx GP, within miles of certain victory. Soon the uncertainties were overcome and the 350cc model began to win hearts, and later led to 500/600cc models.

Two-stroke development continued with the advanced but short lived ‘Sixport,’ which ended production in late 1930. The 350cc ohv became the A2 and led to the launch of the smaller 250cc version and then the 500. Impressed by rival ohc 250cc models, Newey came up with his own sweet version in 1933 and then, in mid-decade, and with the help of Ray Mason, he unveiled the biggest Levis ever, the 600cc (82 x 112mm) ohv single. Levis also launched an 80cc autocycle engine which found its way into the HEC.

For 1939, Mason designed an oil damped (plunger) sprung frame and then a 350cc side-valve model. Further success seemed assured but WWII began and Levis’ part for the allied war effort was the manufacture of air compressors, a role it continued afterWWII, never returning to motorcycle manufacture.

Considering Levis motorcycles were made in smaller quantities than the products of some rivals and many, especially the ohv engines powered racers, scramblers, trials models and grass track solos/outfits were used in anger long after the war had ended, survival rate is good. As with any pre-WWII marque the spares situation isn’t brilliant, but parts still appear at autojumbles and with many Levis enthusiasts around the world, help is available, but you need to search it out. 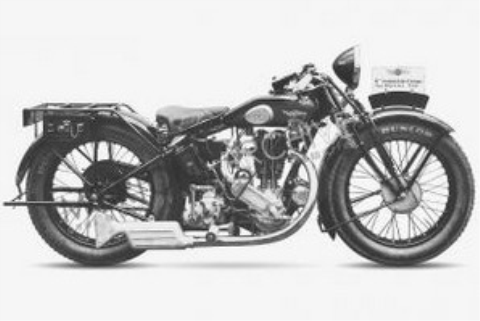 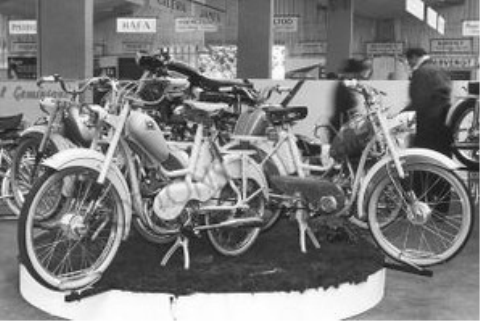 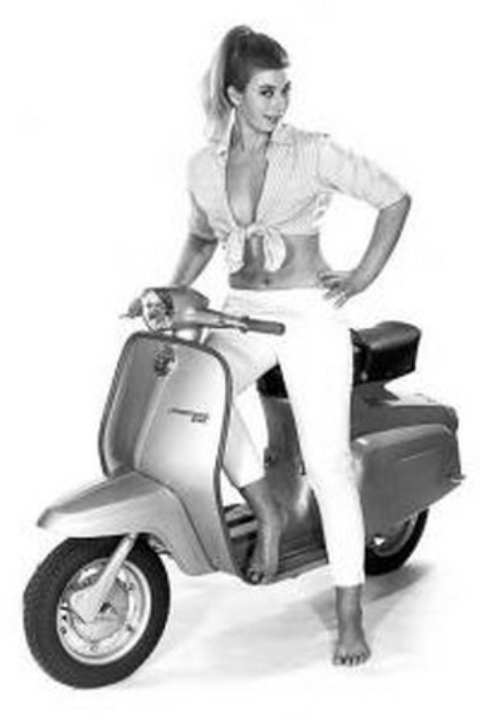 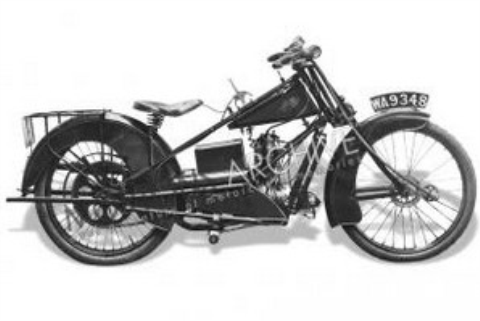