Reference: A to Z classic reference: Hawker - Hildebrand and Wolfmuller

Hazlewood 1905-24 UK
Coventry firm established in 1876, that began experimenting with motorcycle design in 1905. Quantity assembly started in 1911 with JAP powered lightweights, followed by larger V-twins. Production ran until 1916, restarting in 1920, again with a JAP engined range. Although Hazlewood production was significant, few survive in the UK as most were exported to Colonial markets.

HEC 1938-40 UK
Moderate production of an 80cc Levis engined two-stroke autocycle, the Power Cycle. Rare and different, as the Levis engine was used instead of familiar Villiers unit.

Manufacture restarted in 1948 with the 123cc Ilo powered K125, the 197cc Villiers 6E engined V200 in 1950 and a range of Ilo engined up to 250cc lightweights in the early Fifties. Top of the range was the attractive K250Z with the twin cylinder two-stroke Ilo unit and capable of 70mph (110kph). Ilo engine spares are available in Germany where Heckers command higher price than here in the UK. 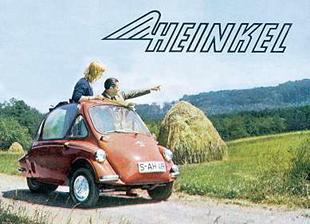 Eying the micro car market, Heinkel launched the 174cc Kabinen (car scooter) in 1956 with a scooter-based ohv engine and a 198cc version was soon on offer too. Nicknamed – along with the BMW Isetta – bubble cars, the Heinkel was made under licence for the UK market by Trojan.

Heinkel Tourist Scooters were superbly engineered and the factory knew it, offering owners plaques on achieving landmark distances. The German Heinkel Scooter Club is one of the best set up one make clubs and is still able to supply almost all spares needed for the Tourist range.

Helios 1921-22 German
Powered by a fore and aft 493cc, twin cylinder, Max Friz designed, BMW M2B15 proprietary engine, the Helios was built by BMW, though not to their design. Problems encountered with the Helios encouraged Friz to design the shaft drive, BMW transverse twin. Rare, sought after and consequently, expensive.

Henderson 1912-31 USA
On the face of it William Henderson had it all wrong when he designed his first four. From its 65in wheelbase, extremely long fuel tank with saddle mount over, to the passenger being carried in front of the driver to ensure better weight distribution, the four cylinder Henderson was, to our European eyes, odd. Yet many consider the Henderson – founded in Detroit by brothers William and Tom – was the best American in-line four ever built. 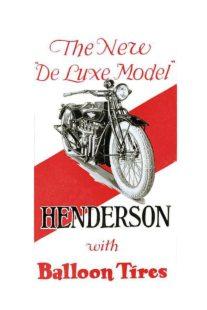 Launched with a mechanical inlet over side exhaust valve four cylinder air cooled engine, with a clutch, but no gears and a fold out starting handle, the Jefferson Avenue factory planned 1000 machines for home market sales in its first year. Examples were raced, including at Brooklands, but it was as a long distance roadster the Henderson excelled and gained much publicity. In 1912, Carl Clancy completed an 18,000 mile global tour. In 1917, Alan Bedall travelled the 3296 miles from Los Angeles to New York in seven days 16¼ hours. Roy Artley made it from the Canadian border to Tijuana, Mexico in three days 15 minutes… Hendersons were also used for some ridiculous feats, none more so than that of Blick Wolter – two laps of the Los Angeles pleasure park roller coaster riding between the rails!

In 1917, cycle magnate and manufacturer of the Excelsior (American X in the UK) Ignaz Schwinn bought out the Hendersons and transferred production to Chicago. By 1919, the Henderson had grown to 1168cc becoming the Model Z and Z2E (electric lighting and horn). However, all was not happiness in Chicago and the Hendersons resigned, Tom entering the export business and Bill designing and manufacturing the four cylinder Ace motorcycle. Art Lemon, who had been with Henderson since 1915, took over as chief designer.

In a changing world, Henderson began exporting to the UK in quantity in 1914 and restarted seriously in 1920 with the Art Lemon design side-valve 1301cc Model K. UK importers Melchior, Armstrong and Dassau were charging £210 in 1921. By 1924, the price had fallen to £103 19s (£103.95). In the USA, the Model K reigned supreme in its class. Capable of almost 100mph, police authorities used them for high speed pursuit work, they excelled for long distance trips and at track speed events such as the Tacoma Board Speedway, Washington, where Wells Bennett established a 24hr world record covering 1562 miles at an average speed of 65mph.

While the Henderson looked externally similar to earlier models, mechanical advances abounded. By 1925, the Henderson sported Silchrome steel alloy exhaust valves, split skirt aluminium pistons, Timkin bearings, high lift cams and one piece forged steel crankshaft. Long distance rides continued to publicise the Henderson throughout much of the world, but not in Britain. It was too small! But FJR (Bonzo) Heath rode 1301cc Hendersons in long distance trials and, unbelievably, Bonzo and PA Wills rode the four cylinder giants in the Southern Scott Trial at Camberley, considered by many as the first ever scramble.

Arthur Constantine took over as chief designer when Art Lemon moved to Ace. The Henderson became more and more powerful, while remaining very durable. With the Wall Street Crash months away, Henderson unveiled their best model ever, their 45hp 1301cc KJ with claims of 10 to 100mph in top gear – a claim that will sound familiar to Ariel Square Four fans. In reality the flexible motor more than lived up to its boast. Testers achieved 8 to 110mph in top gear.

The engine powered midget speedway cars, light aircraft and boats, but its end was nigh. The US stock market crash, global recession and Schwinn’s overwhelming belief that quantity production was essential for viability led Ignaz to end motorcycle production of all his marques and concentrate on cycle manufacture. His company thrived, so he may have been right, but the loss was that of America’s best four.

Henderson survival is good, but examples are eagerly sought here in the UK, Australia, mainland Europe and of course the USA, by buyers with deep pockets.

Henley 1920-29 UK
Assembler of attractive motorcycles with Blackburne, Villiers, JAP and MAG engines. In 1927, the marque was renamed the New Henley. A sizable handful of Blackburne engined models survive.

Hercules 1904- Germany
Carl Marschutz founded his factory in 1886 to manufacture pedal cycles. Nurnberger Hercules Werke GmbH made their first motorcycles in 1904, using proprietary engines mounted in heavyweight cycle type frames. During the run up to WWI, Hercules manufactured many other products including electric cars, toboggans and shoe cleaning machines. After WWI, they concentrated on pedal cycles until 1924 before they again considered motorcycle manufacture. But the effort got off to a slow start – 250 units in four years.

Once again seeing a future in motorcycle manufacture, they began assembly on a larger scale, again using proprietary engines. During the 1904-39 period, they built two and four-stroke motorcycles from 73cc to 500cc. Villiers, JAP and Sturmey Archer engines were sourced from the UK, while Continental makers including Sachs, Ilo, Fafnir, Moser and Kurchen supplied units too. Keen for competition-led publicity, Hercules supported riders, including Hans Kahrmann, Carlchen Geffers and Rudi Grenz.

Hercules’ factories were badly damaged by Allied bombing during WWII, which along with Allied manufacturing constraints, delayed the launch of their first post-WWII models, the 98cc 212 and 123cc 312, until the 1950 Frankfurt Show. Over the next three years, their range rapidly expanded to encompass all possible capacities up to 250cc using Sachs and Ilo engines. Mopeds and scooters were manufactured too. Hercules became big volume manufacturers, exporting to Northern European countries.

Launching the 173cc K175 rekindled Hercules interest in off-road competition and the roadster was adapted into ISDT trim for the 1956 event. It was a sport in which Hercules excelled for the next 20 years.

They also began marketing machines in to the UK, but as TI (Raleigh) owned the Hercules trade mark for the UK the German motorcycles were marketed as the Prior. When the German motorcycle industry struggled during the late Fifties, Hercules diversified into building mopeds and go-karts. In 1966 Hercules became part of the Zweirad Union – a group formed in 1958 to unite DKW, Express and Victoria – which was taken over by the huge automotive group Fitchel Sachs, suppliers of Sachs engines to Hercules.

As well as continuing with on and off-road lightweight production, plus military models, Hercules (Sachs) developed the Wankel engine for motorcycle use. The W2000 was, in effect, a 294cc rotary snowmobile engine hung from a cradle type frame with telescopic front forks and swinging arm rear suspension. The W2000 was sold under DKW or Sachs logos for some export markets.

The marketing of Sachs engined lightweights – including many off-road models – to the USA continued into the Eighties, when the range was cut to under 100cc models. During the Nineties, the Hercules badge was used by Peugeot scooters for the home market and still exists for Fitchel Sachs to use as they wish.

Herdette-Bruneau 1902-14 France
Doubtful if survivors exist, but deserves a mention for advanced designs including a water-cooled parallel twin, V-twin two-stroke plus both ohv and ohc engines – all before WWI.

Hero 1978-
India Just creeping in on our 25 year rule. Factory established to build Peugeot mopeds under licence, has since added the Puch moped – marketed as the Hero-Puch – and up to 100cc Hondas, built under licence, to their range.

Hesketh 1981- UK
A brave attempt to build a bespoke touring motorcycle in the mould of Brough Superior and Vincent. Launched before it was fully sorted which, along with production/financial problems, led to a limited production run. After more hiccups, the project is now under the care of former racer Mick Broom in buildings on the Easton Neston estate of the originator, Lord Hesketh. As well as limited production of new models to order and developing an all-new machine, Mick Broom’s small business maintains and uprates existing models. All good things come to an end and at the time of writing it’s believed the Hesketh marque is for sale as Mick Broom considers retirement. 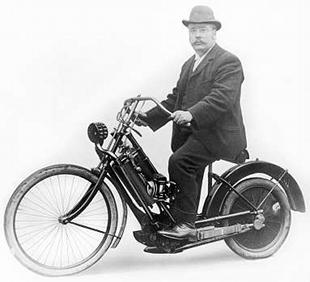 Hildebrand and Wolfmuller 1894-97 Germany
Designed and created by joint manufacturers Heinrich Hildebrand and Alois Wolfmuller along with mechanic Hans Geisenhof in their Munich factory. Within months of its launch, the concern had opened handful of satellite factories, also around Munich.

Despite being the world’s first series production motorcycle and the first two-wheeler to be given the title Motorrad (motorcycle), the team had backed the wrong horse. The slow revving 1488cc engine with surface carburettor, hot tube ignition and conrods directly connected to the rear wheel, which acted as the flywheel, was soon overtaken by the new wave of tiny high speed four-stroke engines pioneered by De Dion Bouton.

An estimated 800-2000 Hildebrand and Wolfmullers were built in a three-year production run, of which at least six survive. Most are in museums. 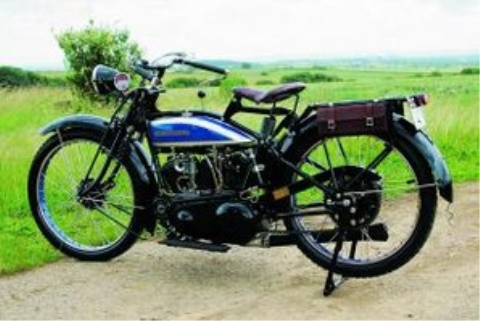